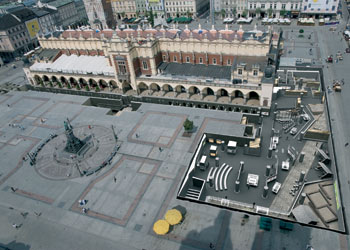 Krakow will soon have the largest underground museum in all of Europe. The project, entitled “Śladem europejskiej tożsamości Krakowa – Szlak Turystyczny po podziemiach Rynku Głównego,” (“In the footsteps of Krakow’s European Identity – A tourist trail under the Main Market Square”) will give us a glimpse into the city’s medieval past.

The area beneath the Cloth Hall has been a hive of activity since 2005, and this summer, after extensive archaeological digs and the laying of concrete slabs, the construction crew set to work once more for the final push. The projected completion date is June 2010, and when unveiled to an eager public, the site will span a staggering 50,000 m2. The pioneering museum, originally designed by Professor Andrzej Kadłuczka and his Archecon Studio, takes in a lost graveyard, wooden houses from the 12th century and earlier, as well as various medieval market stalls and architectural relics. State of the art technology will help bring the exhibits to life. The entire project, estimated at a cost of 42 million złoty, up from the original 25 million projected in early 2008, will be partly funded by the EU.

Making use of the underground space is not a new concept. Already in the 1950s, noted professor and conservator Wiktor Zin speculated that another square could exist under the present one. The idea re-emerged in 2004 during a renovation of the pavement around the Cloth Hall. The city did not have enough funds to realize the project, but one wealthy Cracovian clan did. The Likus family, owners of a string of upmarket hotels in Krakow and elsewhere, proposed a luxury shopping centre, explaining that the market stalls under the Main Square are collectively considered to be the first “shopping centre” in Europe. In restoring them the family promised to recapture the atmosphere of times past. It sounded promising, but due to heated opposition by conservators and locals alike, in the end, the plan was dismissed.

What did they argue about? Besides whether or not one family should be allowed to control such a grand – and historically communal – space, it turns out that centuries of mostly undisturbed archaeological and architectural gems have been buried in the earth just beneath our feet. The director of the archaeological excavations beneath the Main Market Square, Dr. Cezary Buśko, emphasized the significance of their discoveries in an interview with Gazeta Wyborcza in 2007. “We found settlements from the 12th century, which were later destroyed during the Tatar invasion. The 14th century layout of buildings functioned right until the 19th century. All of the relics found during our research are wonderful sources of information about the culture of Krakow’s former inhabitants.” Other underground areas that sparked interest are known as the Kramy Bogate (Rich Stalls), the Wielka Waga (Great Scales), and the Mała Waga (Little Scales). These areas were once packed with merchants and buyers. The latter two – where merchandise was weighed – revealed fragments of the historic scales, and even the entire so-called “loaf of lead”, several hundred kilograms heavy, and complete with the early 14th century princely stamp of Ladislas the Elbow-High. During the prosperous medieval times, the Kramy Bogate were filled with luxurious wares that could not be found anywhere else: gold, amber and the finest furs.

Plans for the entire underground space are still not complete. One thing is certain, even though the enterprise may not end up being an official branch of the Historical Museum of the City of Krakow, there will be a museum and it will be under the auspices of the city. According to the Polish Tourist Organization (POT), the concept anticipates an archaeological-architectural reserve, as well as exhibitions relating to the history of Krakow’s Market Square. In addition, a multimedia forum, a tourist information centre, as well as a children’s area with teaching aids will all complement the museum. Visitors will be able to wander around the site on glass footbridges and ramps. Meanwhile, innovative technology will allow us to explore the treasures in an extraordinary way: via mock-ups, staging, wax figures, holographic presentations, screens, time capsules and multimedia stations.

But there is much to be done before visitors can transport themselves back in time. At the moment, much of the subterranean space still needs to be prepared for basic installations (electricity, air-conditioning, etc). There have been many proposals for the site and even more revisions. What will become of it? Only time will tell, but the project looks set to be a glorious addition to Krakow’s cultural galaxy.