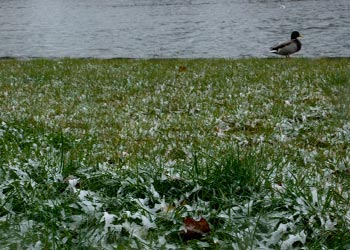 Millions of Poles awoke this morning to a shocking sight – at least shocking for mid-October – of snow falling outside. Winter has arrived early, it seems, and has left parts of the country paralysed.

As temperatures dropped to between one and six degrees Celsius throughout the country, with the eastern parts feeling the greatest chill, mixtures of rain and snow covered nearly all of Poland.

The Warsaw airport was forced to delay or cancel flights due to heavy snow. Meanwhile, districts on the Baltic coast have faced winds reaching 110 km per hour, making several roads impassable and raising fears of flooding.

Overnight, about 40 thousand homes lost power. Since the morning, over half a million people are reported to be without electricity because of the snow. The high winds and snow have brought down trees and power lines, particularly in Warsaw, where fire brigades have been working non-stop to get the city moving again.

Winter-like conditions are expected to continue through the end of the week, and the General Director for the National Roads and Highways (GDDKiA) has stated that its servicemen are on call to keep the nation’s roads operational, with 340,000 tonnes of road salt and over 2,000 snowploughs at the ready.

For a taste of winter in autumn in Krakow, see our photo gallery.