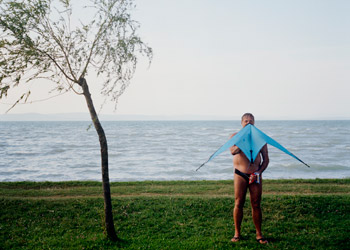 It’s been 20 years since the fall of communism, and while numerous scholars and journalists have written on the system’s impact and the transformations that have happened in Central and Eastern Europe since 1989, as they say – a picture is worth a thousand words.

And in this case, each one of Łukasz Trzcinski’s pictures tells a different story of post-communist life. The legacy of the communist system has been imprinted on all spheres of life in the region – on the countryside, in the economy, and in the people’s mentality. 21 different narratives are told in a series of photographs, representing each country in the region. As the region diversifies, and as ways of life become increasingly different for rural communities and city dwellers, Trzcinski tries to show that despite a common history, each country’s story is unique, and has been affected by the transformation in different ways.

Trzcinski’s photography is accompanied by Wojciech Nowicki’s texts. The author has been travelling extensively throughout the region, taking the pulse of each nation.

The exhibition will be presented in two forms: first, the indoor exhibition, which opens tonight at 8 pm, will be shown at the Camelot Gallery (ul. Św. Tomasza 17) until the 30 October. An outdoor exhibition will accompany it on the Market Square from 21 September – 9 October.