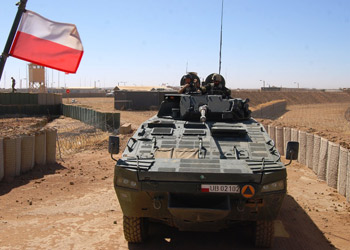 Less than a month after the last death of a Polish soldier in Afghanistan, tragedy has struck the Polish coalition troops once again. This time, the soldier and five others that were wounded were travelling in a Rosomak military vehicle when a mine went off underneath.

The explosion occurred on the afternoon of Friday, 4 September, near the Giro military base. Marcin Poręba, a sapper from the 5th engineering regiment from Szczecin, was killed on site, while another soldier was seriously wounded and four others were injured.

This was the first instance of the death of a Polish soldier in a Rosomak armoured vehicle. While the Rosomaks are equipped with additional steel-composite armour, they are vulnerable to mines as the underside of the vehicle is not as well-protected as its sides. In addition, experts have stated that the explosive used was particularly powerful.

The attack happened once again in the Ghazni province in the east of the country, which Polish troops are in charge of. Poręba is the 11th Polish soldier to die in Afghanistan since 2001.