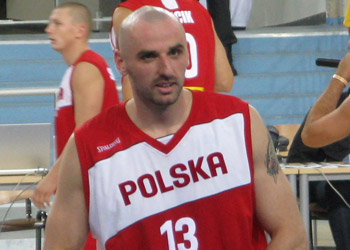 Poland may have lost to Spain 88-83 in Saragossa, but the team gained an important mental victory after proving to themselves and everyone else that Polish basketball will be a force to be reckoned with when they host the EuroBasket.

It has been 46 years since Poland last hosted a European basketball championship for men. And it has been exactly half a century since the Poles actually won a medal at the event. But there are good reasons for hoping that this string of bad results will be broken at Eurobasket 2009, which takes place in September in the sporting halls of Warsaw, Gdańsk, Łódź, Wrocław, and Bydgoszcz, with the finals being held in Katowice on 20 September.

The odds on Poland actually reaching that final are perhaps not the highest, but that is the goal that coach Muli Katzurin has set for himself. In August, at preparatory tournaments in Great Britain and Germany, the side lost four times in a row against opponents that under normal circumstances would have been easy prey for the Poles. But the string of losses against Israel (86:72), Turkey (66:58), Croatia (81:74) and Macedonia (95:88) was broken during another game against Israel. Finally, Poland managed to win (82:67).

Things continued to look up in Saragossa. Poland, now with star player Marcin Gortat – the only Pole in the American NBA – lost to Spain by only five points (88:83), but the fighting spirit, mentality and performance displayed by the Poles shook the current world champions and favourites in their boots.

The power of the Polish team is based around the 2.13 metre tall, Łódź-born centre of Orlando Magic: Marcin Gortat. He inadvertently began playing basketball, after having tried a career in football in his hometown. After turning to basketball, Poland soon became too small for the giant Pole and he moved to top side Cologne. There he made a fantastic impression, and two years ago he was picked up and drafted by American NBA team Orlando Magic, following in the footsteps of the legendary Shaquille O’Neill, Patrick Ewing and his current teammate Dwight Howard.

In early August, the entire basketball-loving part of the Polish nation was shaken when Gortat left the Polish side because of a back injury. The centre has now recovered, giving Poland a boost in morale and better chances in the tournament.

Coach Katzurin, as well as Gortat, believes the Polish team stands a chance to reach the final rounds in Katowice. “Now, with Marcin Gortat fit, he forms a rock solid defence with Maciej Lampe,” Katzurin said. “They are Poland’s ‘Twin Towers’, they form a great combination.” Gortat confirms: “We understand each other almost perfectly. Maciej is a defender that thinks forward and attacks, while I stay behind and scare the opponents and break down their attempts to attack.” With these two on board, alongside the very experienced, nearly 40-year-old Adam Wojcik, the Polish team expects to make it through their first group, which also features Turkey, Bulgaria and one of the favourites, Lithuania. In later stages the Polish team hopes to take revenge on top favourites Spain, or Macedonia. A win against outsider and rival Russia would do just as well.