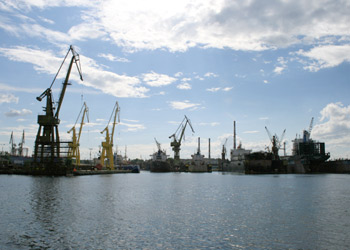 Today was judgement day for the Gdańsk shipyards, and the European Commission voted to keep the business afloat – with some significant changes.

Perhaps the most crucial adjustments involve the yards’ main function. The Commission ruled that the Gdańsk shipyards will no longer be limited to making only ships, but will branch out into making other structures. Overall production capacity will be reduced, and two of the yard’s three slipways will be closed. In addition, over 400 workers will likely lose their jobs in the restructuring project.

The Commission explained their decision in a statement made today: “As the continuous subsidies for the yard’s production since 2002 caused a significant distortion of competition on the shipbuilding market, the yard’s shipbuilding capacity has to be reduced substantially.”

The shipyards will receive an additional 150 million złoty towards repaying its debts, and will not have to repay the original 251 million euros of EU funds at the heart of the controversy, which would have crippled the business completely. According to the European Commission, the shipyards will be allowed to function as long as they are profitable – something the new owners, Industrial Union of Donbass of Ukraine, also hope to achieve.

See also: Day of Reckoning for Polish Shipyards
No Mercy for Shipyards