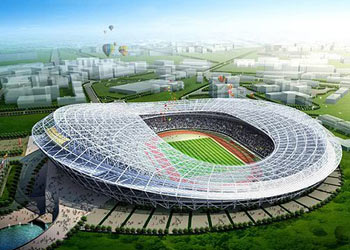 Another chapter in the more and more troubling road towards Euro 2012. Where Poland keeps improving, neighbour Ukraine are sinking deeper and deeper into trouble. The current affair is focused on the building of the stadium in Kiev, the site scheduled for the Euro 2012 final.

The public money, taken from taxes, for the building of the stadium was estimated to be 1.5 billion Ukrainian hryven (about 150 million euros, or 700 million Polish złotys), but after 2.2 billion already has been spent, the completion of the stadium in Kiev is nowhere in sight. National Ukranian newspaper Dzis (Today) has discovered that the majority of the money and the unaccounted 0.7 billion hryven have not been invested in the Euro 2012 tournament or the building of the Kiev stadium at all, but somehow “disappeared”. An outburst of anger, discontent and shame has spread throughout the Ukranian media: “If we don’t solve this very soon, the tournament will be taken away from us and we’ll be the biggest embarrassment worldwide,” the Dzis newspaper reported. “This is public money, paid for by the people and Safiullin [chief of the investigating committee] had better quickly discover where the money went, or our country and the preparation of the tournament might be in serious trouble.”

It also became known that the Ukranian Football Association and the leagues they organize have been declared bankrupt. UEFA Cup winner and Champions League contender Shakhtar Donetsk now have nowhere to play within their own country’s borders.

Next to the problems of financing and corruption, Ukraine still has not been able to present UEFA (the European Football Association) with a timetable, in which the country lays out the plan of preparing the its infrastructure (stadiums, roads, airports, public transport and hotels) for the upcoming event. About a week ago, Michel Platini (chairman of UEFA) stated in French newspaper L’equipe that if Ukraine will not be able to manage “we’ll find the stadiums somewhere else.” He hinted towards the four cities in Poland already appointed to Euro 2012 (Warsaw, Gdansk, Wrocław and Poznań) plus the two reserve cities (Chorzów and Krakow) and then two cities in Eastern Germany, most probably the two cities that also hosted the World Cup 2006, Leipzig and Berlin. The final, in that case, would be held in Warsaw.