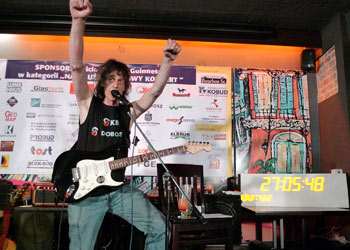 Last week, the Krakow Post wrote about Alex Carlin, the California musician who has made Krakow his part-time home. Carlin’s ambitions plan was to break the Guinness world record for longest solo concert performance, which he smashed successfully on 20-21 June, playing for 32 straight hours.

After the performance, the Post asked Carlin how he felt about breaking the record, to which he replied, “fantastic”: “It was a more amazing, strange and phenomenal experience than I expected. I am really happy with the music itself, it was a fun, good sounding show for 32 hours […]. Also, since it was webcast all over the world, and the recording and transmission was excellent, I feel great – a lot of my friends were listening. And, after doing something so difficult, now I feel like I can do anything.”

Amazingly, the night went off without a hitch, with no broken strings or technical problems to speak of. In fact, it would seem the most difficult part of the performance was singing rather than playing, as Carlin explained: “I was singing almost without any real breaks for 32 hours, and after each song was over I had to begin the next song almost instantly with a very big pressure to remember how the next song starts, again and again for 32 hours non-stop.”

In the end, Carlin performed 500 songs, including the entire Beatles library, which only took up a mere 12 hours. “Around hour 12 things were getting difficult – my head felt like it was exploding and I had dark thoughts about what later hours could feel like if it was already bad like that. But soon things started getting better and better. In fact by the moment I was beating the 27 hour record I felt great, and the last five hours were quite easy. The last hour I was feeling very strong, playing Hendrix, Led Zeppelin, Metallica and my song “No Sleep Only Rock and Roll” – high energy stuff. I was amazed that I could still sing those kinds of vocals at the 32nd hour.” The very end of the gig is documented in video below.

Carlin will be performing with his band, The Henchmen, throughout Poland this summer.