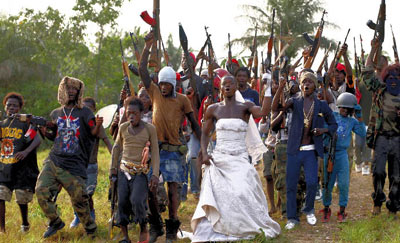 Only in its second edition, Off Plus Camera is the newest offering in Krakow’s film festival circuit. However, what the festival lacks in age it will make up for in scale this year, from huge prizes – $100,000 to be exact – to distinguished guests, such as Kim Dong Ho, the founder and director of the Pusan International Film Festival in Korea, and John Cooper, the Artistic Director of the Sundance festival.

Between the 17th and 26th of April, eight Cracovian cinemas will screen 100 films. Of those, 12 feature dramas will compete for the Cracow Film Award, and with it, $100,000 for the director and one million zloty towards the producer’s next film. Audience awards and the Polish Film Nobel are also up for grabs, making this year’s competition exceptionally fierce.

Festival programme director Anna Trzebiatowska talks about her hopes for this year’s event:

Krakow is already home to several film festivals – how was the decision made to launch Off Plus Camera last year? What sets it apart from the city’s other film festivals?

Off Plus Camera started off with a particular set of goals and – dubious as it may sound – “a mission” that we felt we wanted to carry out. Our aim is to promote independent cinema and to help talented directors – who are only just starting out – make their next feature film (sooner rather than later). We appreciate how difficult it is to finance any full-length film projects and we would like to make this struggle a little less gruelling. That’s where the Dramatic Competition came from. Moreover, we felt the need to bring more films to Krakow ? both old and new. Films that won awards at international festivals, those which divided audiences all over the world as well as those that never made it to Polish cinemas. Therefore, our festival is quite unique on the map of other Cracovian film events. It tries to be open-minded and it initiates the exchange of ideas, inspirations and trends between Polish and international film industries.

Which films will be premiering at this festival?

We managed to secure quite a few European premieres, and all the films in our programme (apart from some of the ones in retrospective sections) have never been shown in Poland before. Our aim is to bring to Krakow as many new or overlooked films as possible. We will have an international premiere of the eagerly-awaited Snow White, Russian Red by Xawery Żuławski. Also, we will have a premiere of Michel Houellebecq’s directorial debut ? Possibility of an Island. Furthermore, all the films from our Competition section will have their Polish, if not European, premieres at Off Camera.

Which of those films are you most excited about?

I am excited about every single one of those films. We have seen them all, we argued over them, fought to have some of them in the programme. It is difficult not to feel strongly about those films after all that. I am particularly excited about Johnny Mad Dog, the film that opens Off Camera. We saw it at Sundance and it made such a strong impression on us, we knew we wanted to bring it to Poland straight away. It is an amazing piece about child-soldiers in Liberia, incredibly brutal, realistic and also very important. Moreover, I am thrilled that we will be showing long lost and forgotten films that never made it to Polish cinemas. Films that won numerous awards all over the world, ones that are often considered groundbreaking. Among others, we will show Beijing Bicycle (Silver Bear, Berlin 2001), Forty Shades of Blue (Grand Jury Prize, Sundance 2005), On connaît la chanson (Césars 1998) and Swoon (Teddy Award, Berlin 1992). Polish audiences have not had the chance to see quite a few of these great films. I’m very happy that we can bring some of those titles to Krakow.

Since the festival emphasises young and unknown filmmakers, how do you decide whose works to show?

We look for independent and coherent visions. We value those filmmakers who have something interesting to say and who are able to express themselves well in a structured manner (even if this means a deliberate lack of structure). Having a few ideas is not enough for a feature-length film ? this is often the problem with first-time directors. Also, we look for films that are daring ? in terms of their visual qualities, themes, approach or perspective. There is no predetermined method of choosing films. Sometimes we watch something and we immediately fall in love with it. Other times, films simply grow on us after the screening.

How did the films that premièred at the first edition of the festival last year do later on? Did any go on to get wider fame?

The winner of Off Camera 2008, Azazel Jacobs’ Momma’s Man, went on to win a number of important awards at various international festivals (including Special Jury Prize at IFF in Boston), Alex Holdrige won the prestigious John Cassavetes Award for hisIn Search of a Midnight Kiss at this year’s Independent Spirit Awards, Lance Hammer’s Ballast won the Breakthrough Director trophy at Gotham Independent Awards 2008.

Besides Poland, which countries will be represented at this year’s festival?

The list is long but I will name a few countries that I can remember: France, Italy, Denmark, Belgium, USA, Mexico, Argentina, Colombia, Canada, Iceland, Israel, Brazil, Ireland, Russia, Japan, New Zealand, Spain, India, Germany? And there are more!

Who are some of the directors and actors we can expect to see at the festival?

We were really lucky that our invitations were accepted by such people as the legend of the French New Wave, Anna Karina, Seymour Cassel ? an actor who worked with many independent filmmakers, including John Cassavetes, Gregg Araki and Tom Kalin ? two of the most important directors of the New Queer Cinema movement.

Will there be any accompanying events alongside the film showings?

Yes, we are preparing a number of panel discussions, Q&A sessions, workshops, lectures, concerts and exhibitions. We would like to take full advantage of the presence of our remarkable guests and it is important for us to give our audiences an opportunity to meet them and to be able to ask them questions.

How did you happen to have a partnership with the Sundance Film Festival this year? What does that entail?

I think we managed to convince them that our interest in Sundance was genuine: cinema – rather than money-related. Also, the fact that we previously worked with Mike Plante and Trevor Groth, who programmed for Sundance, made the difference. Moreover, thanks must go to the persistence of our Communication Director, who did not take no for an answer!

We are very happy that this affiliation is not just on paper ? we will be presenting a strand consisting of the most interesting films discovered at Sundance over the last 25 years.

What do want to happen in the future for the festival?