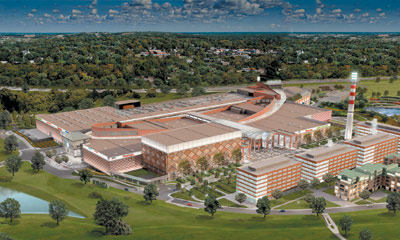 A few years ago, the future location of the Bonarka City Centre looked like a post-war battleground. The lot itself, on which TriGranit is erecting its 2 billion zloty complex, was called the “Dust Factory in Podgorze.” The Hungarian company, with its impressive new design, brought hope of revival to this badly neglected part of town.

The Bonarka Chemical Production Plant, with its rich history and a long tradition in the production of various chemical supplies, was opened in the late 1880s. At its peak production period in the 1980s, the company employed more than 800 workers. Closed in 2003, the abandoned plant quickly fell into ruin. In 2005, Bonarka, with its 19 hectares of land, was purchased by TriGranit Development Corporation.

The company is mainly known in Poland for the construction of the Silesia City Centre in Katowice, which opened in 2005. It also built a residential complex called Debowe Tarasy, also located in Katowice. TriGranit is one of the biggest development companies in this part of Europe, investing in new projects in cities such as Prague, Budapest, Sofia and Zagreb. The company’s main business strategy is to design and build large multi-purpose commercial centres. TriGranit believes that by redeveloping old, run-down post-industrial parts of cities, it can help reshape the social and economic status of these forgotten parts of towns, turning them into lively new neighbourhoods.

This post-industrial revitalization turned out to be the hardest part of the whole project. For many years, the chemical-producing plant contaminated the soil and polluted the ground waters around it. Prior to the initiation of construction, the whole area went through a massive recultivation process, one of the biggest in Poland’s history. This initiative was recognised by the city’s council, which pointed out that TriGranit’s commitment and efforts to transform this part of town into a “livable environment” were a success.

The Bonarka City Centre, when it opens, will be the biggest facility of its kind in Kraków, and one the biggest in Poland. The project is divided into three stages. The first part will include a 234,000 sq. metre shopping and entertainment centre, with 250 shops, a 20-screen cinema, restaurants, cafes, and a two-level parking lot for 3,200 vehicles. The second phase of the project will consist of four modern office buildings, with 30,000 sq. metres of class A office space for rent. The third, and the last, will be a 500 apartment residential complex. A new system of wide pedestrian alleys, bike paths, and squares has also been designed. About 400 new trees will be planted.

The mall’s new road system will be connected to the city’s already existing infrastructure. Work is in progress on modernising local streets and building three new roundabouts. It is estimated that the Bonarka City Centre will generate about 6,000 new jobs.

TriGranit has decided to leave a little reminder of the location’s industrial past. A 105-metre tall reinforced concrete shaft will be the only former industrial structure in the new complex that will not be demolished. The renovated giant, with information about the plant’s history at its base, and with a list of Bonarka Chemical Plant’s former employees carved on its side, might turn out to be an interesting addition to the bustling shopping centre. The designers aim to create a place that mixes the old spirit of the location with the modern city lifestyle of today. In a few months time, we’ll be able to experience it ourselves.

Bonarka City Centre’s first part is scheduled to open in November this year, with the planned completion of the whole project in 2012.