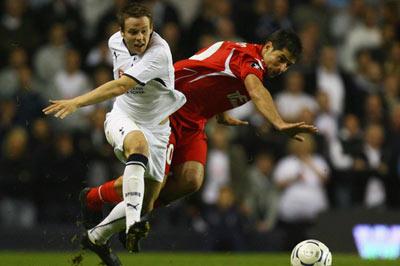 There were no surprises at White Hart Lane on August 19th when Polish champions Wisla Krakow lost to favourites Tottenham Hotspur in the first round of the UEFA Cup.

Wisla can hold their heads high though after a determined performance gave them a realistic chance of progressing into the next round, with the teams due to meet again for the second leg in Krakow on October 2nd.

Having grabbed a crucial away goal in the 2-1 defeat, and putting up a respectable showing against a north London club that’s not short of cash (Spurs invested around £70 million on new players this summer), Wisla needs only a 1-0 victory in the return leg to progress into the group stages.

The visitors got off to a strong start, maintaining most of the early possession and applying pressure on the Spurs defence. However, they were restricted to ambitious long range shots, all of which failed to trouble Spurs goalkeeper Heurelho Gomes.

In the 23rd minute, Jonathan Woodgate met a David Bentley corner with a firm header that was well handled by Wisla keeper Mariusz Pawelek.

Pawelek was called into action again in the 30th minute, bravely coming off his line to deny Darren Bent, following some scratchy Wisla defending.

It was never going to be long before Tottenham converted their chances into actual goals though, and in the 33rd minute the lightning fast Aaron Lennon ran at the Wisla defence from the left, squaring the ball to David Bentley, who opened the scoring with a swift left foot strike that gave Pawelek no chance.

It was the England midfielder’s first goal for his new club since his £15 million move from the Blackburn Rovers in July.

The ecstatic home crowd hadn’t finished celebrating when Wisla delivered what could be a telling counter-punch a minute later. Following some excellent work by Rafal Boguski and a gentle layoff by Pawel Brozek, Czech playmaker Tomas Jirsak produced a cool finish to draw proceedings level and send the 3,000 plus Wisla supporters at the stadium into raptures.

Wisla proceeded to take advantage of the defensive fragility that has seen Tottenham sitting bottom of the English Premier League table so far this season, and Wisla midfielder Mauro Cantoro tested Gomes once more before the end of the first half, although his 20 metre drive was comfortably handled by the Brazilian keeper.

Spurs came out strongly in the second half, seeking to recapture their authority by harassing Wisla at every opportunity, and Pawelek was again called into action when he tipped over a fierce 15 metre strike by Bentley.

Wisla’s disciplined play continued to frustrate their opponents, yet the Poles were not without their luck after a Darren Bent goal was disallowed for an offside decision that was dubious at best.

Bent found relief in the 73rd minute though, neatly nodding in substitute Fraizer Campbell’s cross and putting Tottenham ahead once again after some loose marking in the penalty box by the Krakow defence.

With their tails in the air, Tottenham sought to extend their lead, twice coming close through efforts from Bale and King, with the latter spoiling a good chance to secure the home side?s first win of the season in all competitions.

Although starved of chances in the second half, Wisla almost drew level with four minutes to play when substitute Andrzej Niedzielan rushed through on goal, only to be denied by a last-ditch tackle from Woodgate.

Despite the loss, Wisla’s brave performance against a superior Tottenham outfit puts them in good stead to pull off an upset when the sides meet again in Krakow, a point that didn’t go unnoticed by the Krakow side’s coach, Maciej Skorza. “We are waiting with optimism for the rematch in Krakow,” Skorza said after the game.

The two-leg tie is now delicately poised for what should be a scintillating return match in Krakow.