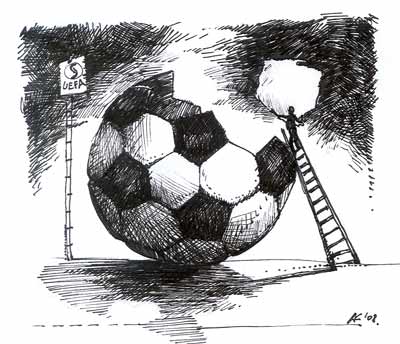 UEFA has reaffirmed its commitment to staging Euro 2012 in Poland and Ukraine, but warned both countries could still lose the tournament if preparations fall further behind schedule.

The decision came at a September 26th meeting of UEFA’s Executive Committee in Bordeaux, and was based on its review of a report by experts on preparations for the 16-team tournament.

Officials in Poland and Ukraine must have breathed a sigh of relief after speculation in the days preceding the decision suggested that the co-hosts could lose the 2012 tournament if the stuttering progress made by both since being awarded the championships in April last year continues.

Poland and Ukraine saw off a bid from Italy and a joint candidacy from Croatia and Hungary, but have since struggled to tackle the colossal tasks of upgrading stadiums and modernising rail and road infrastructure, airports, roads and hotels.

While Poland has moved forward in the last six months by securing essential funding for projects, the country still faces major problems with transport infrastructure. Organisers have already conceded that a number of the proposed railway developments will not be completed on time, while the Polish government has staggered in upgrading existing roads and building badly needed new ones.

Meanwhile, a political crisis triggered by squabbling between Ukraine’s president and prime minister, coupled with the September collapse of the ruling coalition?s government, has considerably slowed progress and put extra strain on the Eastern European country?s aim to hold onto hosting rights.

While recognising that progress has been achieved by both countries in the last six months at an organisational level and in the advancement of infrastructure, UEFA President Michel Platini was quoted after the meeting by uefa.com as saying that the “progress is neither uniform nor constant.”

Platini also underlined the importance of completing stadiums in Warsaw and Kiev, saying that if either of the cities’ stadiums were not completed, then the country in question would lose the right to stage the tournament.

“Without Kiev or without Warsaw [stadiums], we cannot have a tournament,” Platini said.

Warsaw is to stage the opening match in a new 55,000-seat national stadium on the banks of the Vistula River. The crumbling 10th Anniversary Stadium that currently stands on the site is slowly being torn down and preliminary construction on the new stadium is scheduled to begin in early 2009 and finish in 2011.

The renovation of Kiev’s 80,000-seat Olympic stadium, which hosted the football tournament at the 1980 Moscow Olympics and is to host the Euro 2012 final, is another major hurdle in Ukrainian preparations. Delays in finding a company to reconstruct the stadium have led to doubts that the necessary renovations will be completed on time.

Despite the setbacks, Polish and Ukrainian organisers continue to put a positive spin on things, most notably Polish FA President Michal Listkiewicz, who refuted claims made in the German media that he had said he was worried about Poland’s readiness to co-host Euro 2012.

“Euro 2012 has been awarded to Ukraine and Poland and there is no reason for this to change,” Listkiewicz told reporters after the UEFA meeting. “What makes me so confident? The progress we have made.”

It seems that for now UEFA is holding him to his word, although European football’s governing body confirmed that there will not necessarily be the same number of venues per country and that the number of stadiums to be used will be a maximum of eight and a minimum of six.

“If the progress is not even, there may be more venues in one country than another,” UEFA General Secretary David Taylor said after the meeting.

Poland has sought to extend the number of host venues in the country, hoping that along with Warsaw, Poznan, Gdansk and Wroclaw, venues in Krakow and Chorzow could be used for the tournament. UEFA has said that the final list of host cities will be announced at some stage in 2009.

Euro 2012 will be the first major sporting event held in former communist Eastern Europe since the Moscow Olympics in 1980.