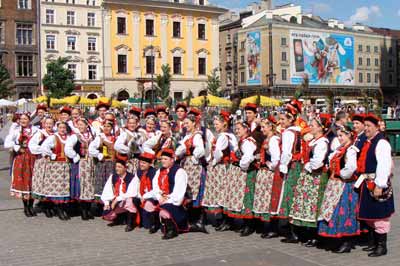 Last month, as part of the “Ukraine and Poland – Two Neighbours” festival, a group of Polish folk dancers performed on stage on the Market Square. While that alone is far from unusual for Krakow, the extraordinary thing about these performers is that they came all the way from London in order to dance traditional Polish dances (and occasionally sing some Polish tunes from days of olde) to an audience of locals and tourists.

The Mazury group, a folk dance company that calls the Polish YMCA in West London their home, stopped for a performance in Krakow on their way to the biggest festival of traditional Polish folk music, or Mazurek music, in Beskidy.

The over 120-member group is composed of first and second generation Poles living in London and dates back to 1949, when it was founded as the official dance group of the Polish YMCA. As such, it became the longest established and largest Polish dance group in the UK, featuring children and grandchildren of the post-war Polish immigrants who first strove to preserve this part of their homeland’s culture abroad.

However, according to the group’s artistic director Wlodek Lesiecki, the group does not see itself as polonia (the Polish word for Polish expatriates), but rather as “Poles who happen to live in London.” When performing in the UK and abroad, the Mazury group is “representing Poland, not London.”

Lesiecki took over the direction of the group in 1972, extending the original repertoire of the group’s dances to include regional variety. Lesiecki also established a junior group for dancers between the ages of 9 and 12 and a middle group for ages 12-15, in addition to the senior group that performed in Krakow and includes all dancers above the age of 15. For the past few decades, touring has also been a regular part of the Mazury heritage, and the group participates in several festivals in the UK and abroad.

In addition to the talented dancers on stage, the performance on the Market Square was accompanied by a string quartet, led by musical director Maryla Kolendo. As much care is given to the historical accuracy of the music as the dances themselves, and Kolendo trains the members of the group who also sing during the performance.

In keeping with the idea of preserving Polish traditions, each one of the intricate folk costumes is hand-made by members of the group. Lesiecki, who choreographs the group’s performances based on traditional dances, also performs with the group, as does his daughter. In fact, during the group’s performance it was not difficult to spot the comfort and familial trust between the members, as dancers of age groups varying from teenagers to middle-aged cooperate to bring near-forgotten Polish traditions to life for audiences around Europe.