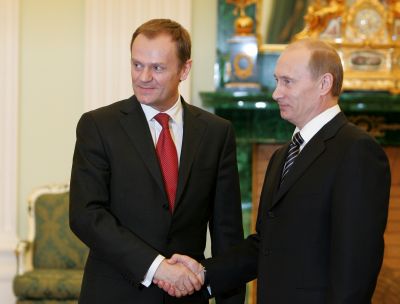 The Tusk government will be hitting the 100-day mark March 9. The end of the traditional honeymoon period for a new government is likely to bring the Tusk forces trumpeting their accomplishments and opposition parties unsheathing their swords and attacking. Jaroslaw Kaczynski’s Law and Justice Party, which Tusk’s Civic Platform Party routed in the October elections, will try to convince the public that the Tusk government has failed to live up to its promise.

Law and Justice officials such as Kaczynski and key party figure Jacek Kurski are already maintaining that Tusk’s government has failed to achieve anything in its first three months because it has been busy undoing the good things the Law and Justice-led government created. They are also condemning Tusk’s foreign policy as dangerous and criticizing every minister of his cabinet. News organizations already are speculating that the opposition will try to convince parliament to pass a no-confidence vote against Justice Minister Zbigniew Cwiakalski in the beginning of March.

However, Tusk and his Civic Platform Party still enjoy a high level of support among Poles, surveys show. Forty-eight percent of voters back Civic Platform while only 19 percent favor Law and Justice, according to a poll whose results were published Feb. 8.
That means the ruling party has managed to gain 7 percentage points of popularity since the elections while Law and Justice has lost an astonishing 13 percentage points. These results may reflect voter happiness with Tusk’s foreign policy. He has already visited the three European capitals that are most important to Poland: Berlin, Moscow and Brussels, headquarters of the EU. The visits brought positive changes in Poland’s relations with Germany, Russia and the EU. Neither German leader Angela Merkel nor EU leaders liked Kaczynski’s skeptical, aggressive stance towards Germany and the EU. They expressed relief after meeting Tusk. President Vladimir Putin and his designated successor, Dmitry Medvedev, received Tusk warmly in Moscow, signaling a thawing of chilly Polish-Russian relations.

Tusk failed to convince Russian leaders to change their plans to lay a gas pipeline from Russia under the Baltic Sea to Germany. Poland and the Baltic countries want the pipeline laid on their soil as an assurance against Russia cutting off gas to their homes and factories. During the meeting with Tusk, Russian officials indicated they have accepted the fact that elements of an American missile defense shield could be built in Poland. Poland’s willingness to let the U.S. station anti-missile missiles on Polish soil has upset Putin and his generals, creating a major source of friction in Polish-Russian relations.
A final decision on whether Poland will allow the missiles may be made on March 10, when Tusk visits Washington for talks with President Bush. Another item that Tusk and Bush are likely to discuss is Poland’s planned withdrawal of its forces from Iraq – a Tusk campaign pledge.

The prime minister is likely to try to convince the Americans that he will strive for both good relations with Washington and with Europe, especially the EU, many of whose leaders were upset with some of Kaczynski’s policies. But better Polish relations with the outside world will count for little with voters if the Tusk government is unable to address domestic problems. Tusk created great expectations by saying during his campaign that Poland had the capability of emulating Ireland’s economic miracle.

Just before the vote Tusk issued a list of 10 promises to the Polish people that he would implement if his party won. The list includes higher economic growth, solving the country’s health-care crisis, a flat income tax, a comprehensive fight against corruption and rapid development of the highway system.
The opposition is sure to bring up those items on the list that they think Tusk has failed to address. The health-care system may be the biggest challenge. It seems to swallow every bit of new money thrown at improving it, and remains broken. Every previous government has failed to solve the situation. But Tusk is on the health-care hot seat at the moment. A strike of doctors and nurses led to hospital directors substantially raising their wages. But because they don’t have the money to pay the increased wages, many face bankruptcy before the end of the year.

Tusk rejects the idea of raising taxes to fix the health-care crisis. This puts the pressure squarely on Health Minister Ewa Kopacz. The opposition and news organizaitons will closely follow what she does to try to resolve the crisis. To underscore the problem, the latest Eurobarometer poll showed that Poles’ biggest concern is the health-care system. The Eurobarometer is a poll of residents of all EU countries.

Since Tusk became prime minister, miners and customs officials have struck for better pay. Teachers may do the same if the government fails to meet their demands. Recent economic growth and a surge in the number of Poles taking jobs overseas have led to many corporations raising pay. But public-sector wages have failed to rise substantially, causing unhappiness among those workers.

Another problem for the government is its strained relations with President Lech Kaczynski, like his brother Jaroslaw, a member of the Law and Justice Party. The president has the ability to veto legislation that the Tusk forces get passed, and the Tusk coalition’s slim majority in parliament would make it difficult to override many vetoes. The opposition is likely to criticize the Tusk forces for an inability to implement many of the changes they have said they want to make. It can’t be disputed that, so far, few of those changes have become law.

Once the opposition begins attacking the government after the 100-day honeymoon period is over, will the public turn on the Tusk forces as well? That remains to be seen, of course.
If the public does sour on the government, it will be the same pattern that has occurred with every other government. Only if the public continues to support the Tusk forces will the Civic Platform be the first party since independence in 1989 to win two successive general elections.