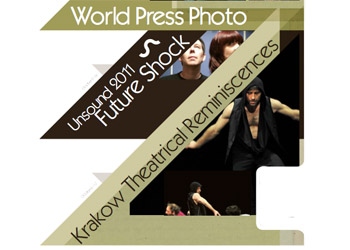 It’s all been fairly quiet so far. In fact, you could be forgiven for not noticing that Poland had taken up the Presidency of the Council of the European Union back in July – unless you were particularly looking for it.

That’s all about to change, as a series of events has been organised in Krakow – or shifted from their usual dates – to mark the half-way point of the six month tenure. The city has always been a fertile breeding ground for creativity and performance, and many still consider it to be Poland’s cultural capital. This month, though, there are no holds barred as three of the biggest events of Krakow’s artistic year take centre stage.

World Press Photo has long been a favourite, showcasing the best photojournalism from the previous 12 months. Look out especially for Jodi Bieber’s arresting portrait of Bibi Aisha – and if you think the name means nothing to you right now, the picture will almost certainly have seared itself into your consciousness some time ago.

It’s also the 36th year of the Krakow Theatrical Reminiscences Festival – an international event that this time around features several premieres and acts that have never before performed in the city. And don’t miss Unsound – music, movies and installations from the dark and often twisted side of the creative
imagination.