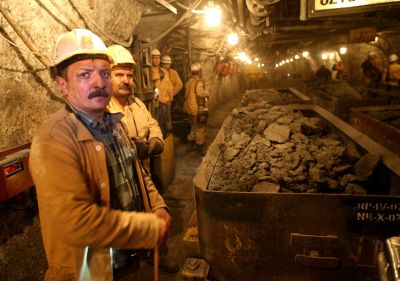 Poland wants to become less dependent on its main source of energy – air-polluting coal – because of EU emissions requirements.One step it is trying is being part of a four-nation nuclear-power project. Another is an attempt to convince Russia to lay a natural-gas pipeline in Poland and nearby
countries rather than in the Baltic Sea.

Because Poland has the largest coal reseres in Europe, the government hopes that over the long term it will be able to find cleaner coal-burning technology.The EU wants to cut carbon dioxide emissions in member countries by 20 percent by the year 2020. It also wants the amount of renewable energy used in member countries to rise from the 5 percent of 2005 to 7.5 percent by 2010.Coal is the source of almost all of Poland’s electricity production and district heating.The country has reserves that will last 400 years.

Most are in three basins – Upper
Silesia, Lower Silesia and Lublin.Although Polish coal production has fallen steadily since the late 1980s, when it was heavily subsidized, Poland is still the biggest producer of hard coal in Europe.One way Poland is trying to move away from coal is joining Lithuania, Latvia and Estonia in a nuclear power project that will be built in Lithuania. Lithuania wants Poland to have less than 1,200 megawatts of the project’s 3,200-megawatt capacity, however – so Poland has yet to sign the partnership agreement. It wants more of the plant’s output.Preliminary estimates are that the four
countries will spend 2.4 bln to 4 bln euro on the project.The Baltic countries, which regained their independence from the collapsing Soviet
Union in 1991, rely heavily on Russian energy. Like ex-Communist Poland, they see the nuclear plant as a way to reduce Moscow’s ability to use energy blackmail against them. Russia has temporarily cut off energy supplies to neighbors whose policies it disliked. The political message was unmistakable: Play ball with us or it will happen again. The nuclear plant’s planners hope to have it on line by 2015, although some experts have suggested that 2017 to 2020 would be more realistic. Some Polish politicians who have been unhappy with the amount of electricity that Lithuania is offering Poland have proposed a nuclear plant in Poland. Many Poles oppose the idea, however, remembering the 1986 disaster at Chernobyl in neighboring Ukraine. Radioactive fallout from Chernobyl fell in Poland. Poland’s hopes for maintaining or increasing its natural-gas supplies hinge
largely on hopes to soon convince Moscow to lay a pipeline through Poland rather than in the Baltic Sea. The main objective of the Nord Stream project is to supply Russian gas to Germany. Nord Stream will transport up to 55 bln cubic meters of gas a year, enough to supply more than 20 mln households.
Polish leaders see a pipeline on their soil as the best guarantee of their country being able to continue obtaining Russian gas. If the pipeline were under water, it would be much easier for Russia to cut off supplies to Poland and the Baltics – which is why all four countries oppose a sea route.

Sweden is worried about what would happen to the environment if the pipeline ruptures. The current pipeline path comes very close to the Swedish coast. “This is turning out to be a huge project that involves several countries, lots of nongovernmental agencies and big environmental issues,” said Swedish Environment Minister Sten Jerdenius. The Swedish Environmental Protection Agency wants Russia to lay the pipeline further south in the Baltic because of the fragile ecology of the country?s southern islands, which are internationally protected areas. Even if Russia agreed, it could run into
problems with seabed locations where countries dumped munitions after World War II. The pipeline will be one of the issues that Prime Minister Donald Tusk discusses in a visit to Moscow on Friday. Tusk will propose that Russia lay the pipeline in Lithuania, Latvia, Estonia, Poland and Germany, according to the daily Dziennik newspaper. His main argument with Russian President Vladimir Putin will be that a land route will be half the cost of
a sea route.

If Tusk fails to convince the Kremlin, Poland will put even more effort into coal, including finding cleaner ways to burn it.
Economy Minister Waldemar Pawlak has said that coal is an opportunity for Poland, not a problem. The soaring price of oil means that even if the coal industry spent a lot of money on cleaner-burning technology, coal would still be a bargain, he told the Polish Press Agency (PAP). “It’s high time to find money for modernizing” the industry, he said.If we can “introduce cleaner technologies – for example, gasified or liquefied coal – we can create a great alternative to other kinds of fuels,” he said. The EU has a number of programs to encourage member countries to come up with cleaner energy sources. One, the Intelligent Energy for Europe program, provides funds to develop renewable energy. The European Commission says renewable energy sources – particularly wind, water, solar power and biomass – are expected to be economically competitive with conventional energy sources in the medium to long term.In addition, it points out, renewable sources contribute to sustainable development and security of supply.