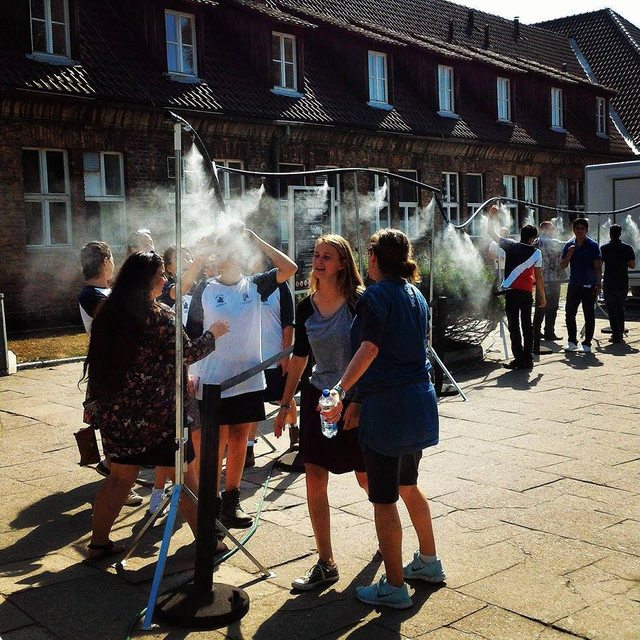 As Poland continues to endure one of the most brutal summers on record, locals are doing whatever they can to beat the heat. In that spirit, the museum administrators at the former Nazi concentration camp at Auschwitz have installed showers at the entrance which spray a fine mist of water to help tourists cool down.

Some visitors, however, have expressed outrage, immediately drawing parallels between the installation and the mock “shower” chambers which were used to lethally gas some of the Jews, Polish and Soviet political prisoners, Romani, and other “undesirables” killed there during the Holocaust between 1940 and 1945—in total, over a million.

“All the Israelis felt this was very distasteful,” Meyer Bulka, 48, told The Jerusalem Post, who vocalized his distaste to the staff. “Someone called it a ‘Holocaust gimmick.'”

After several complaints to the office, the directors of the memorial and museum apologized for any negative connotations, but so far they have declined to remove the showers.

“We aren’t used to high temperatures in Poland in the summer,” a spokesperson said, explaining why the installation will remain until the heat breaks. They cited several incidents already where tourists have fainted. “Therefore, we needed to provide a response to the many visitors so they can cool off.”

The heat wave is expected to continue until Wednesday, which is likely to bring rain and temperatures back down to 22C (72F).

Other tourists were more sympathetic, noting that people were indeed making use of the showers. One Israeli Facebook commenter wryly warned others “not to fall for the same trick again.” “Sometimes,” another commenter remarked, “a shower is just a shower.”

Auschwitz tourism this year has hit record numbers, with over 250,000 people visiting in the first three months of 2015 alone—a 40% increase over the same period the previous year.