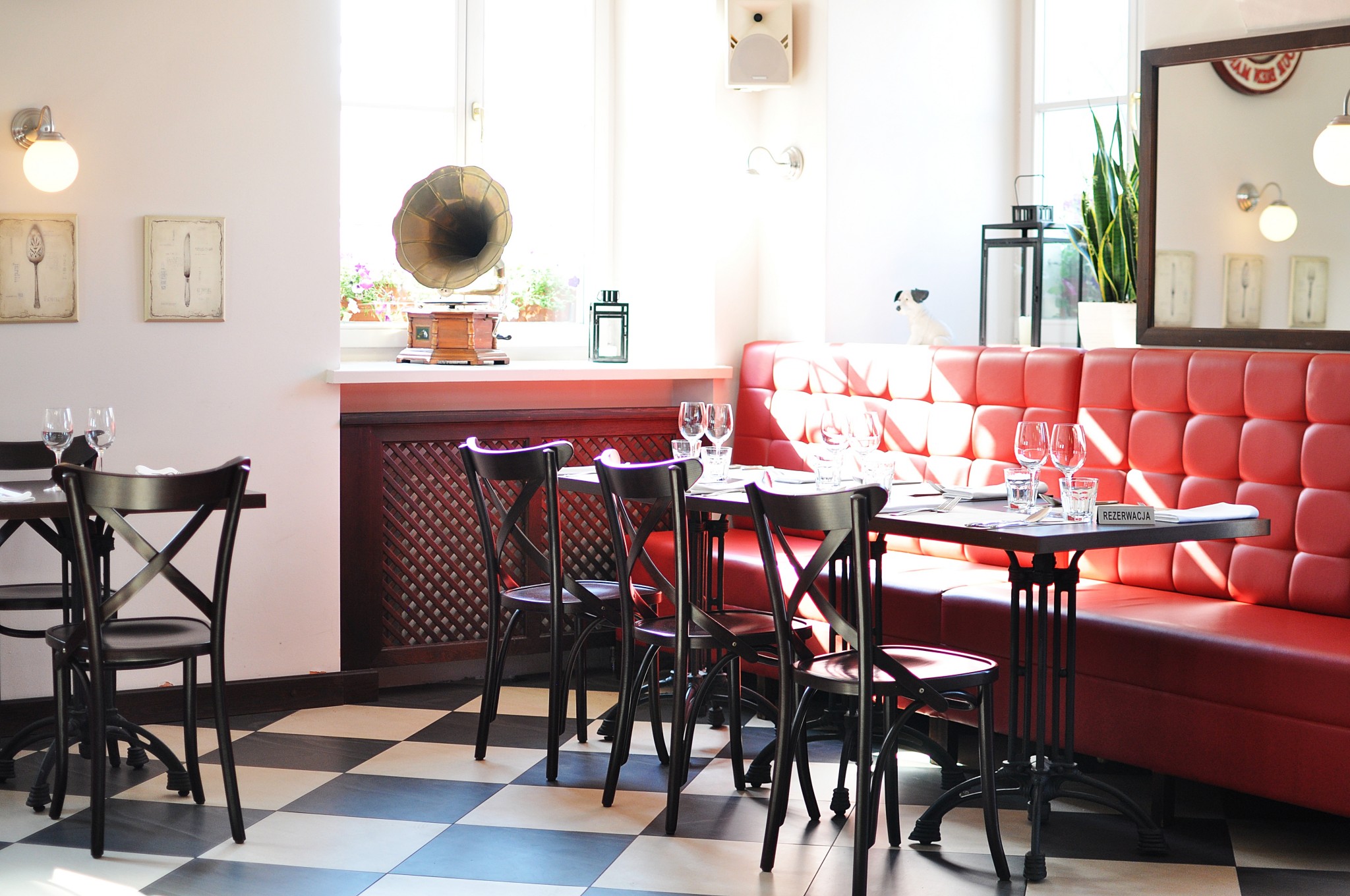 French cuisine has never had the cachet of, say, Italian food in Poland, and, for most Cracovians, when you mention the word “French,” a raised eyebrow and a Gallic shrug of the shoulders might be elicited. Perhaps it’s the (unfair) stereotypical association with snails and frogs’ legs, but French restaurants remain mystifyingly under-represented in this city.

For the past two years, ZaKładka Food & Wine has been trying—with a large degree of success, it seems—to buck that trend. Indeed, judging by the crowds when I walk past most days, I wonder if this has all been an ingenious marketing move to bridge an obvious gap in the market. The footbridge itself has only been open since 2010 and has resulted in the opening of several bars and eateries on both sides of the river. Those on the Podgorze side, like ZaKładka, are mostly clustered in the vicinity of Drukarnia club. The area hasn’t exactly become the culinary heart of Krakow, but it has developed enough interesting options to entice the adventurous over the river from an increasingly crowded and hectic Kazimierz scene.

Like a lot of restaurants of its ilk these days, ZaKładka does not go in for decorations and frills, and its interior is pretty basic, barring a few black and white pictures and the odd antique—a bistro-style space with several rooms on two levels including some tables outside in the summer. The vibe is fairly laid-back, and the clientele mixed, age-wise and dress-wise. The waiters are professional and polite.

Taking a seat, I skipped the aperitif and ordered a beer—Miłosław Marcowe. A light, tasty Polish craft beer from the Fortuna brewery. The menu is a seasonal affair, dishes changing from week to week. It’s divided into starters, soups, salads, meat, fish/seafood, baguettes, and desserts, and it fits neatly onto an A3 side of paper. User-friendly menus also seem de rigeur these days, which should make it easier to choose a dish. However, just choosing a starter from the few intriguing options had me scratching my head. 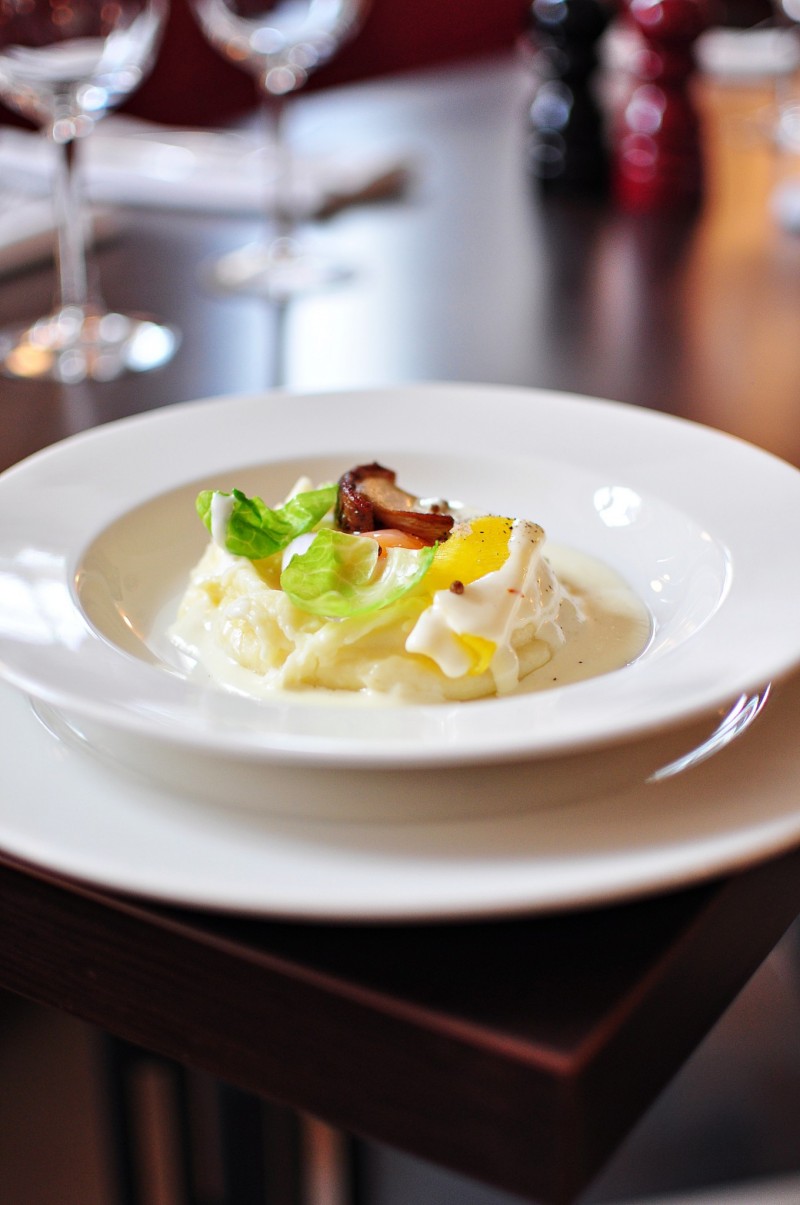 Very thoughtfully, the waitress presented me with a gratis appetizer before I had the chance to order one: some small rolls with goat’s cheese, chive spread, and olive paste. I was considering the skillet of snails a la tomate, baked in roasted garlic cream, but, with a degree less insouciance than I wished, I ordered the foi gras torchon, which came with grapefruit confit and brioche with cinnamon. I am a huge fan of  pâté, and when done well, it can be one of the best starters going. This, I am glad to say, was an extremely flavoursome way to kick off a meal, a buttery and delicate mixture that lingered on the palate agreeably. The tart and tangy confit complemented it well. The waitress recommended an excellent sweet white French wine to go with it, Chateau du Levant, which washed it all down nicely.

A propos the beverages, I ordered a half-litre carafe of house red wine, a French Languedoc, reasonably priced at 28zl—the most inexpensive option available. For a house wine, it was quite agreeable. The wine list, which is extensive, should satisfy all but the most pedantic connoisseur. A wealth of options are available from, amongst others, France, Chile, Spain, Italy, Australia, New Zealand, Moravia, and Poland, and prices should suit all wallets. You can even purchase a Dom Perignon Brut for 790zl if you really want to splash out.

I decided to get a soup next, and the choice was straightforward: cream of mussels with saffron and leek (14zl). I had had mussels in this restaurant previously and been happy, but mussel soup is a rarity so I was happy to shell out. I wasn’t to be disappointed, as this was subtle and very smooth, with a few succulent mussels in their shells happily stranded in the broth. As a between-course mouth-freshener, I ordered a scoop of carrot ice cream, modestly priced at 4zl.

It dutifully freshened my mouth and I was ready for the main course: Guinea fowl breast served with cauliflower, celery, and young potato ragout (42zl). The legumes were served as a bed to the meat, which came with bones. Buttery and crunchy, they were an ideal accompaniment to the meat, which (I hesitate to say) is similar to chicken, though much smaller and with a slightly darker colour and richer flavour. As a whole, the dish worked well and was just the right side of filling. 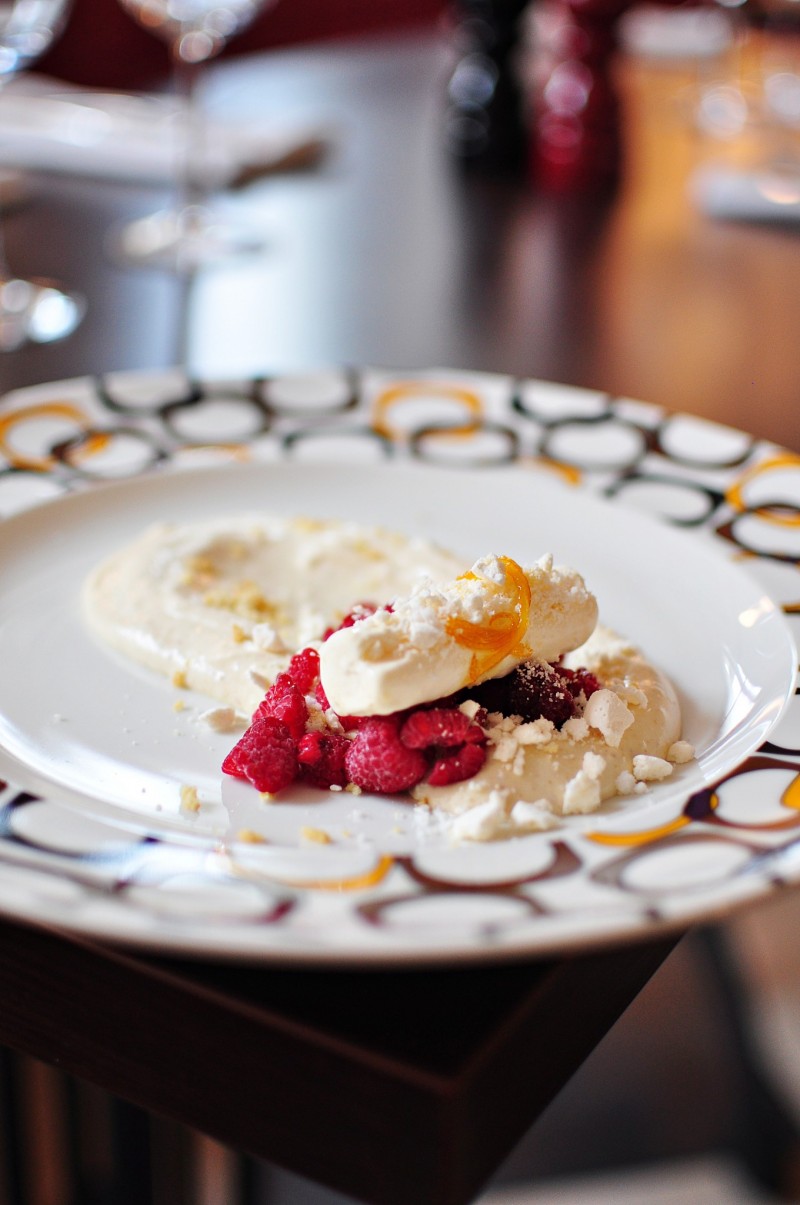 One slight reservation in the past I’ve had about this restaurant—and it’s by no means the first French restaurant to be guilty of this—is its rather small portions, depending on what dish you order. That, however, is one fairly minor quibble in a restaurant where food can hardly be said to be over-priced for the quality: mains weigh in at between 29zl and 65zl. One word of caution for vegetarians, however: there are only five options for salads and vegetables, and I’m not sure if any would serve on its own as a main. Several fish dishes, including octopus, prawns, zander and cod, should make up for this though.

On to dessert then, and I plumped for a “delicate” vanilla cheesecake on chocolate pastry with vanilla sauce, crushed raspberries, and mini-meringues. The chocolate base served as an excellent way to prop up the delicate creamy cheese mixture, and the crushed raspberries and sweet meringues just added to the effect—a very well-executed denoument indeed. As I strolled back home to Kazimierz over the footbridge, I reflected that ZaKładka has just the requisite amount of je ne sais quoi, and that it is no accident it is leading the way when it comes to the Podgorze dining scene at the moment. So, bid adieu to your culinary clichés, au revoir to the ancien regime of Polish/Italian cuisine, and say bonjour to some of the best-value and high-quality French dining this side of Paris.