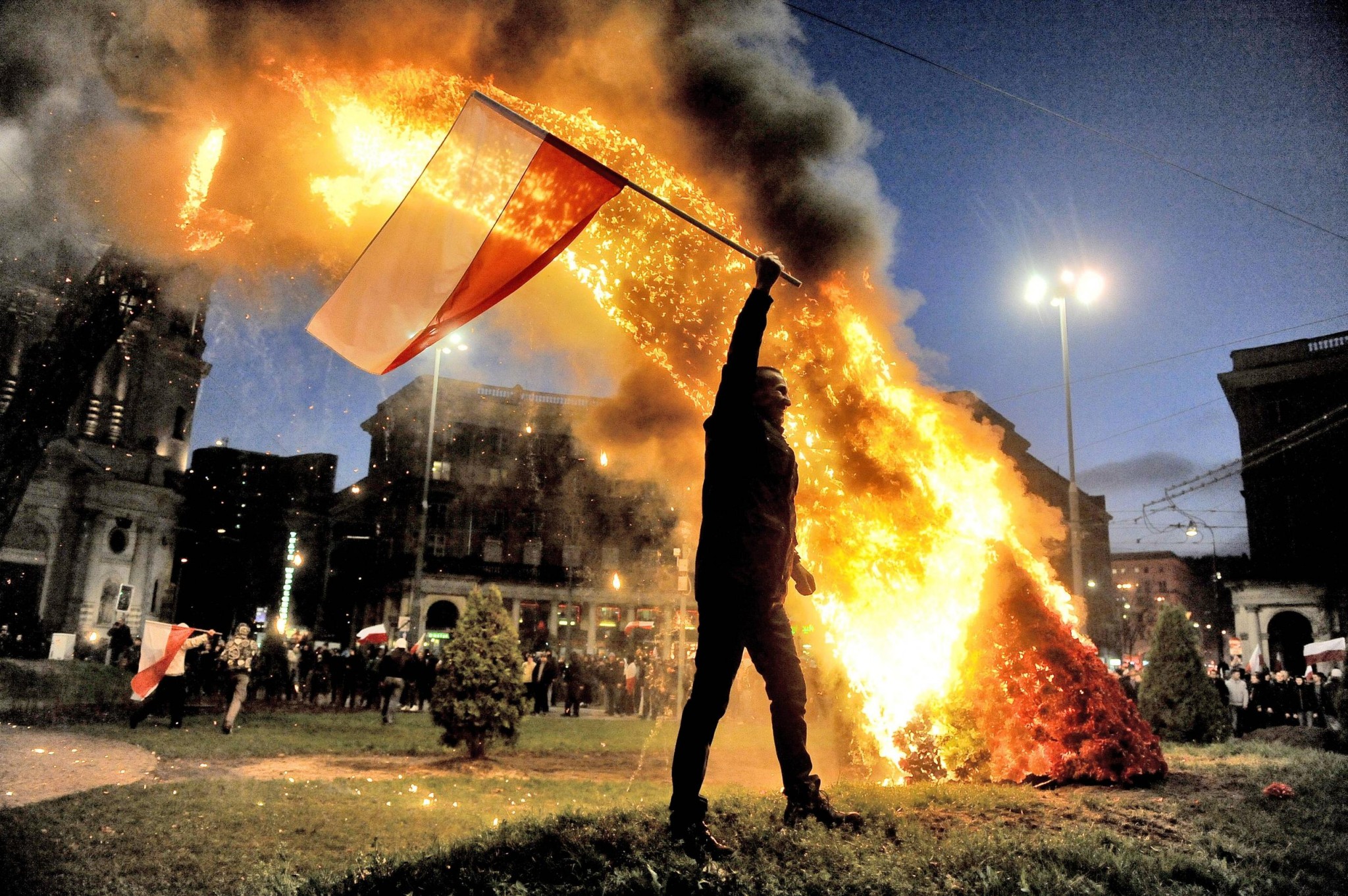 Recent events have made the Polish LGBT community both hopeful and dismayed. On the one hand, they have witnessed a significant accomplishment by the United States and Ireland moving to legalize gay marriage. The second especially should cause Poles to take note: Ireland is a nation quite similar to theirs in terms of religious background, and they established marriage equality in an unprecedented way: by national vote. But at that time last month, the presidential election campaign in Poland was nearing its end, and election day was hardly cheerful—not only for the LGBT but for all left-wing people.

Both candidates were conservatives and the difference between them was not clear. (To quote a popular Internet meme of the time, “For vegetarian options this weekend, we serve pork and beef.”) Their campaigns were based on mutual distaste of the competition and left many voters confused and discouraged. The result of the election, though, was quite a surprise, as the winner was not widely known until recently.

As a result, we are not quite sure what Andrzej Duda’s victory will bring about. Polish queers especially lost their hope, as his opinion on sexual minorities is quite clear—his party is right-wing and strongly connected with the Episcopate. One of his first comments after the election results were announced was on the surface reassuring: he promised to be the president who “serves all Polish people.” However, the fact that these words were spoken in the Sanctuary of Jasna Góra places him in a position that is not so impartial.

It is hard not to draw comparisons between Poland and Ireland—both countries are heavily Catholic, with the Catholic Church holding sway over politics and people’s views. Both were faced with a major crisis after the exposure of pedophilia among priests. But while the Irish have lost their faith in the Catholic Church’s positions on sexuality, hardly anything changed in Poland. What are the chances that in Poland, one day, people will make a similar decision? Before venturing any prognoses, let’s take a look at the past.

Poland is proud to be “the country without stakes,” as in the 15th and 16th centuries it was well-known for its openness and tolerance. Even then, though, “the sin of sodomy” was punishable by death pursuant to a Polish legal code from 1559. In 1561, in Kazimierz—now part of Krakow—a man was burned at the stake because “he lived as woman and married a man.” In the 18th and 19th centuries, when the partitioned Poland was under Prussian, Austrian, and Russian rule and was governed by their laws, “sinful acts” were punished by exile, prison, or detainment in “improvement” facilities. In 1932, the new Penal Code contained no mention of homosexual acts.

After World War II, the political elites of People’s Republic were not gay-friendly, as homosexuality was considered pathological, but until 1985 queers were kept under surveillance rather than oppressed. This changed when Czesław Kiszczak, the Minister of Internal Affairs, initiated an action called “Hiacynt” (“Hyacinth”). The purpose of the action was to arrest and catalogue gay men—only men—in order to blackmail them. Data on almost 11,000 persons was gathered under the guise of preventive action caused by the AIDS threat. In 2007 the IPN (Institute of National Remembrance) issued a statement that the “Hiacynt” action did not violate any law under PRP’s legal regulations.

After 1989 the situation slowly began to change. In 1990, the Lambda association, the first official LGBT organization in Poland, was registered. The government’s reaction to sexual minorities was a somewhat peculiar mixture of “we don’t care” and “you are disgusting”—there were no attempts to penalise homosexual acts, but the ruling elites, including Deputy Minister of Health Kazimierz Kapera, were not trying to hide their aversion. When in 1991 that Minister was dismissed by the Prime Minister because of his hateful comments on the homosexuals, the Archbishop Józef Glemp took his side, making the Catholic Church, unsurprisingly, an opponent to sexual minorities.

12 years later, in 2003, the first draft of the Civil Partnership Act was submitted by Maria Szyszkowska but was never subjected for debate in the Sejm (the lower chamber of the Polish Parliament). Since then, three parties submitted similar drafts, with all of them discarded in the Parliament sessions. Even this year, in May, the Parliament voted down yet another draft, with 56% of MPs opposing it.

The subject of civil partnership is quite obviously a taboo for conservative parties. There is hardly anything resembling a debate going on—all drafts are simply rejected automatically without discussing them. In 2008, the government spokesperson issued a rather disarmingly straightforward statement on the matter: “the Cabinet did not and will not deal with this issue.” 2011 was an important year as two LGBT activists and politicians—Robert Biedroń, openly gay, and Anna Grodzka, a transsexual, became members of the Polish parliament, but, momentous as it was, it did not change much about LGBT rights.

At the same time, social awareness is changing. Lots of LGBT organizations are trying to change people’s minds and convince them that homosexuality is not an illness or a deviance. There are numerous initiatives worth mentioning, with pride parades held annualy in several Polish cities being perhaps the most interesting. The first time the Poles marched to voice their views was in 2001. In 2004, the Mayor of Warsaw, Lech Kaczyński—future president of Poland—did not grant his permission for a pride parade so a “standing manifestation” was held instead. It was attended by over 1,000 people, not only queers and LGBT activists but also people simply interested in equality, freedom, and justice. In 2005, Lech Kaczyński once again banned the parade. An illegal demonstration was attended by, among others, the Minister of the Interior and Administration, the Deputy Prime Minister, and several senators, MPs, and MEPs. Later on, the European Court of Human Rights ruled that the Mayor’s decision had violated human rights.

What might this new era of Polish politics bring to LGBT people? Many are pretty certain: nothing good. Long before the election was held, it was quite clear that nearly all candidates were uninterested in making progress toward the legalisation of gay marriage. The matter of LGBT discrimination seems not to concern Polish political elites in the slightest—it is commonly considered a whim of the perverted few.

If they could be bothered to do some research, they would discover the “Rodziny z wyboru” (“Families of choice”) report, according to which “the perverted few” make up approximately 5% of the Polish population, with at least half of that number living in stable homosexual relationships. And the legal situation of these couples is difficult. By law, they are strangers, which poses a number of problems when it comes to medical or inheritance issues, not to mention parental rights. The thought of gay couples adopting children makes conservative Poles shiver with dread. Neither presidential candidate breathed one word on these matters throughout the whole campaign. One is faced with two less-than-appealing options here—is it better to be openly discriminated or to not exist at all?

More recently, a wave of controversy washed over the Polish media: when asked whether he would hire a homosexual person, Andrzej Duda answered that, of course, he would not care about personal relationships as long as the person in question was not running around half-naked. His words caused many people to wonder whether the president-elect has ever actually met any gays or lesbians; they also caused their hope for a substantial debate about civil partnerships to flag significantly.

It is noteworthy that the Polish debate about LGBT rights, as well as other contentious issues such as the equality of women and minorities, sex education, in vitro fertilisation, or gender identity is suffused with ideology instead of measurable facts and rational arguments. More often than not, the arguments are rooted in emotions and based on rumors and hearsay evidence. Several MPs are united in a parliamentary team “to stop the advance of the gender ideology,” convinced that it leads to the oversexualisation of children in elementary schools. There have also been draft motions to criminalise IVF, and homosexuals are sometimes accused of pedophilia. The once-innocent rainbow became a symbol of controversy, and some have stated that the counterarguments to gender theory and registered partnerships can be found in the Polish Constitution. It is hard, therefore, to even raise these subjects without emotions running high, not to mention to make any progress.

When does come to registered partnerships of two people of the same gender, the word “marriage” is rarely used. Polish LGBT activists do not even use the term “marriage equality”—they are seeking any systemic solution to legalise relationships in order to make the fiscal and medical matters easier to handle for gay couples. Without any legal measure of registering a relationship, couples are unable to jointly apply for loans or account taxes; they may not refuse to testify against each other in court, cannot be given medical information about their partner nor represent them in any way. In most cases, there is a workaround in the form of obtaining the power of attorney from a Notary Public, but whether they are accepted really depends on the goodwill (or whim, or views) of the medical or legal staff.

It is worth noting that heterosexual couples are not mentioned in the debate, unlike in, e.g., France, where civil solidarity pacts were introduced in 1999 and where most registered partnerships unite people of opposite sexes. Since there are more and more couples living without any legal recognition, perhaps the civil partnerships would be welcomed not only by the LGBT community.

This argument does not convince the ruling elites, though: they consider such topics irrelevant and unimportant. Andrzej Duda has claimed that “matters that are vital for society are not dealt with while others, undoubtedly connected with the leftist ideology, are being pushed forward. They are, in my view, destroying the traditional family which, since the dawn of mankind, has assured its development and endurance.” For all his declarations of not caring about one’s sexual orientation, the new president does not seem likely to lend a favourable ear to those marching in pride parades nor those submitting drafts in the Parliament, despite all his declarations.

But there is also one more vital, and often overlooked, issue. More and more European countries are passing laws on civil partnerships and marriage equality. These arrangements are not recognised under Polish law. In consequence, in Poland, same-sex couples married in other countries are effectively strangers. It is not hard to imagine how problematic that would be for people coming to our country with an intention to live here peacefully. The lack of any legal solution of the civil partnership issue is not only social and national but also a legal and international problem that needs to be solved as soon as possible.

Krystian Legierski, an LGBT activist, predicts that nothing will change in the next five years—any attempt to negotiate a change of law or submit any demands will be labelled “homosexual propaganda” and summarily dismissed. He sees the consolidation of Polish queers as the only hope and actually sees the five years of conservative rule as the factor inspiring that consolidation. However, it is still going to be five more years of stagnation. The parliamentary election this autumn may bring change—whether for better or for worse remains to be seen.

47 thoughts on “The US and Ireland are legalizing gay marriage. When will Poland?”