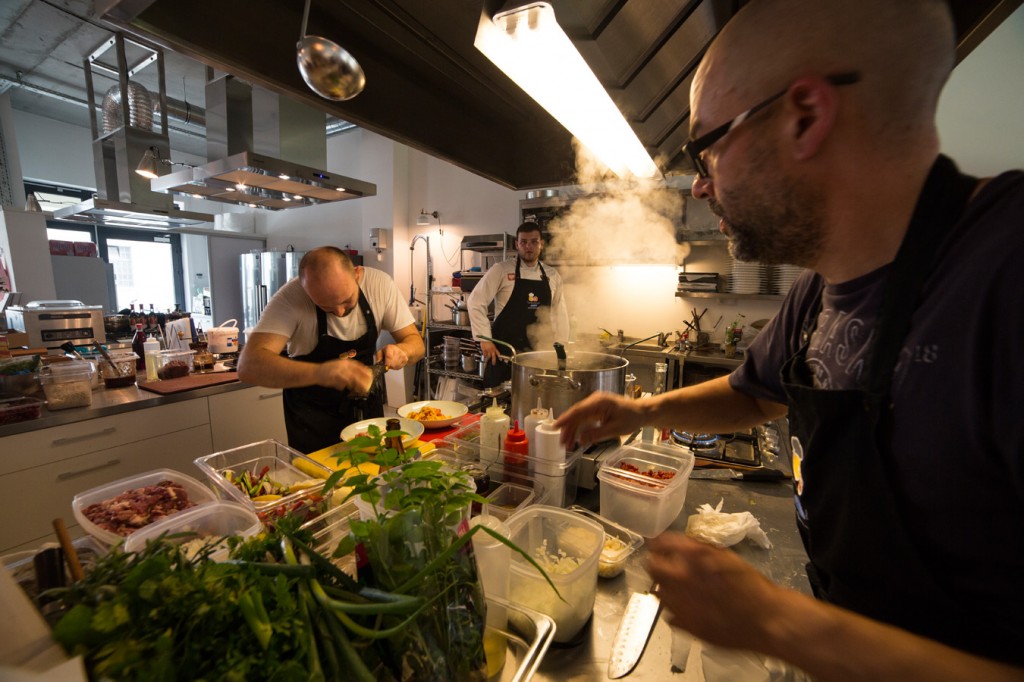 Zabłocie, it seems, is fast becoming one of the trendiest areas in Krakow; its low-key, semi-industrial appeal a mixture of disused factories, art spaces, brand new loft apartments, and converted luxury flats. Much like the Praga area of Warsaw, which twenty years ago was a cultural wasteland, this former backwater of Krakow has reinvented itself and the hipsters have not been slow to catch on. Kazimierz has become passé, with its golf-carts and endless stream of tourists, while Podgorze has failed to ignite the cultural imagination as some predicted. So, it appears, now it’s Zabłocie’s turn. The Schindler factory makeover has had a lot to do with this, along with the opening of the adjoining MOCAK gallery and Fabryka club venue, as a clutch of new cafés, bars and restaurants have appeared in the past year or two.

One such place is Twoj Kucharz (‘Your Chef’), which opened on Ul. Slusarska last summer. It’s somewhat hidden away, in a back street of this out-of-the-way area, so the average expat, never mind tourist, would be hard-pushed to picture where this is unless passing on a Schindler tour; for now, most of the clients here are locals. Actually it’s just over the river from Galeria Kazimierz and a fifteen minute walk to the heart of Kazimierz itself. Owner and head chef Bartek Plocienniak has worked in some top restaurants in London and also owned Zielony Kuchnia in Krakow, so knows a thing or two about the trade. “It’s a very dynamic area. In two or three years, it will be the social and culinary centre of Krakow.” 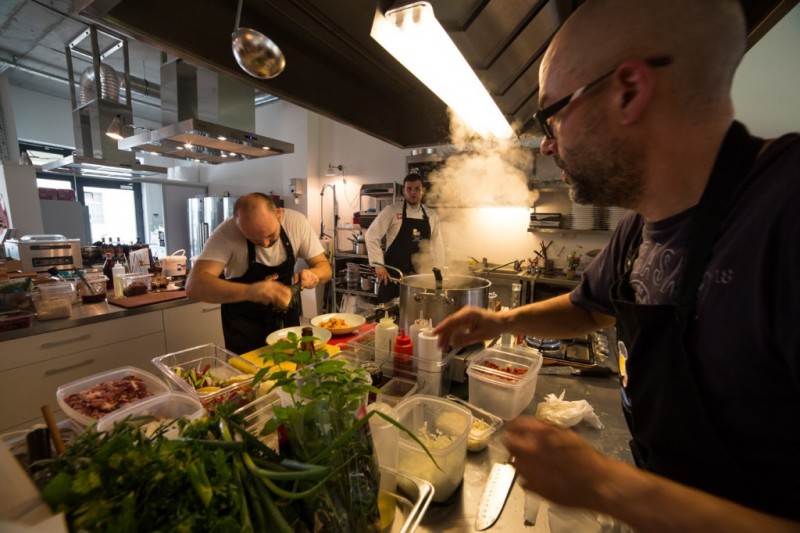 A bold claim, since at the moment his is one of only a handful of eateries, and certainly the only one which aspires to haute cuisine. Nevertheless, that is what is on offer here, and the moment you walk in, you know you’re in a space which has been very carefully thought-out indeed. It’s an open-plan, simple Scandinavian-style kitchen-cum-restaurant, so you can see the cooks carefully preparing everything and meticulously presenting their dishes to perfection. No Gordon Ramsey-style blowing of gaskets or smashing of frying pans here; the four chefs patiently and calmly working in front of us looked as relaxed as Hindu cows. This makes the atmosphere pleasantly relaxed and you feel part of the cooking experience, rather than detatched from it.

There are about six or seven tables in an L-shaped large room with low lighting and an industrial theme with metal pipes and ventilation openly on view above. I ordered a Belgian-style blonde beer from the local Birbant brewery—there is a choice of fifteen beers, all of the local, craft variety. I am a big fan of this much-needed development in the beer market in recent years in Poland, where local breweries are mushrooming, and this tasty, full-bodied brew didn’t disappoint. Beers are priced 9-14zl.

The menu is a kind of Polish fusion: modern Polish dishes blended with international elements, particularly from the UK, and with a definite French twist in presentation and style. It is short, which seems to be the way these days, with a choice from two soups, four starters, five mains and three desserts. It’s also constantly changing—from week to week, new dishes appear and disappear, depending on what’s in or out of season. The two soups available this week were cream of asparagus with red onion, and a sorrel soup (‘Szczawiowa’ in Polish, quite a rarity) with lamb broth, calamary and egg confit. I chose the latter, and found it extremely palatable, though its saltiness may not have been to all tastes. The tangy lamb broth combined well with the tiny salty squid cubes and firm egg yolk, and the portion was satisfying—which it should be at 19zł. 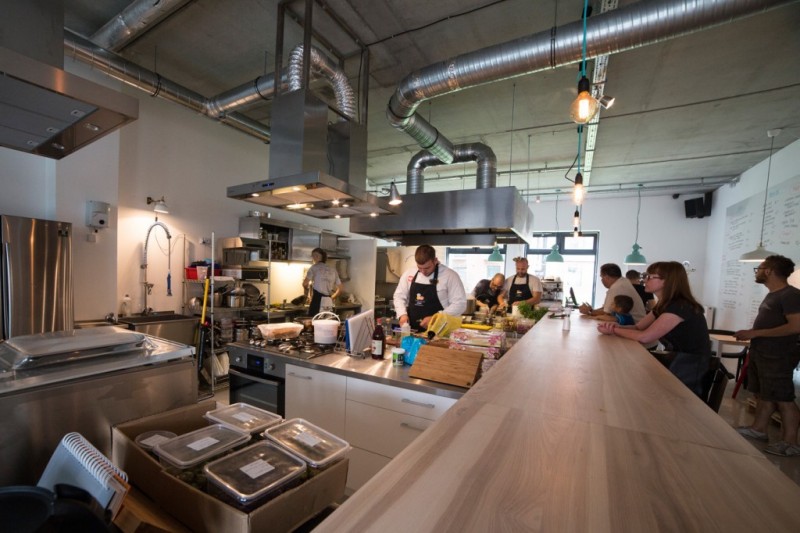 From the list of starters, I was eyeing the mussels with wheat beer, but unfortunately they were unavailable on the night I was there. The helpful waitress recommended an unusual-looking dish which combined asparagus, strawberries, pickled mackerel and smoked pig fat. I must say I am in favour of of fusion and inventive food, and I liked the sweet, buttery asparagus very much; both it and the strawberries combined fine with the briny mackerel, though I could have done without the pig fat. Fans of smalec may find something to like in the smoky, delicate flavour, but unfortunately I am not one.

Moving on to the main dish, again I was disappointed to find that the enticing-looking lamb with pistachio, celery puree and chocolate sauce was unavailable, so I went for entrecote steak, medium-rare, with asparagus, young carrots and potatoes and foi gras sauce. The meat is sourced locally, as is most of the food here, and I found it to be tender and juicy, pan-fried to perfection. The foi-gras sauce added a subtle, rich flavour to the meat, and the Italian dry red wine I had with it complemented it well. The vegetables were roasted and flavoursome, especially the young carrots. I’ve written in this column in the past that finding a good steak in Krakow is a deceptively tricky thing to do, and this was certainly one of the best I’ve tried. At 58zł though, it might not suit all pockets. Overall, the menu comes in at the medium to high end, with mains priced between 30 and 60zł.

Regarding the wine, there is a list written on a board which is extensive, with a selection of Italian, Hungarian, Georgian, Armenian and Chilean wines among others; even a Polish white wine is available from the Zielona Gora region. Our knowledgable waitress was a more than able guide in recommending the right varieties for our meal.

For dessert: a choice between Strawberry Eton mess and cheesecake. I narrowly went for the cheesecake, which was with passion fruit, black lilac jelly and rye crumble. English-style with a biscuit base, I found it to be a light and refreshing conclusion to the meal, the passion fruit leaving a pleasant taste and the biscuit base crunchy and delicious. A large café latte remained, and as I sipped it I had the feeling that this addition to the culinary scene in Krakow was destined to be a popular one, despite—or maybe because of—the location. If this area does develop as the owner predicts, his restaurant could be at the avante-garde of cuisine in this city for years to come.