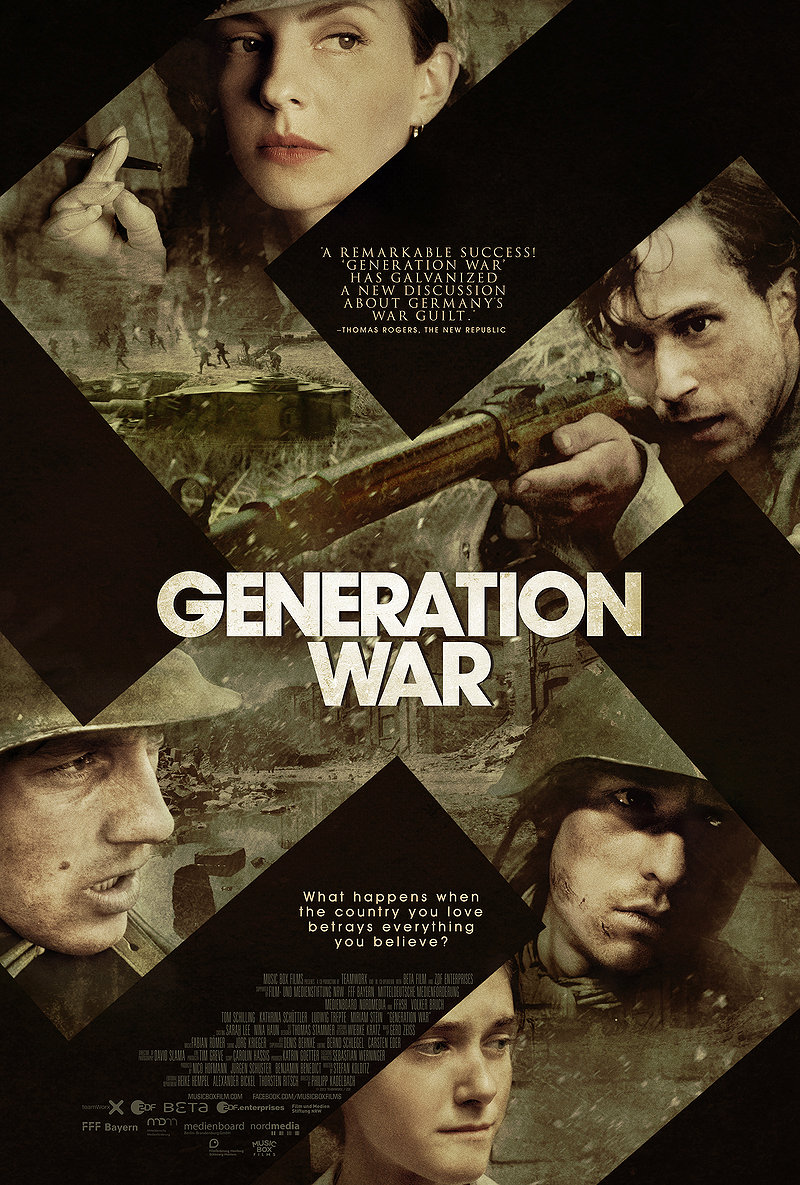 Now that most of us have presumably watched this German television series, it may be time for an assessment less coloured by the initial reaction to its extremely negative portrayal of the Polish resistance. 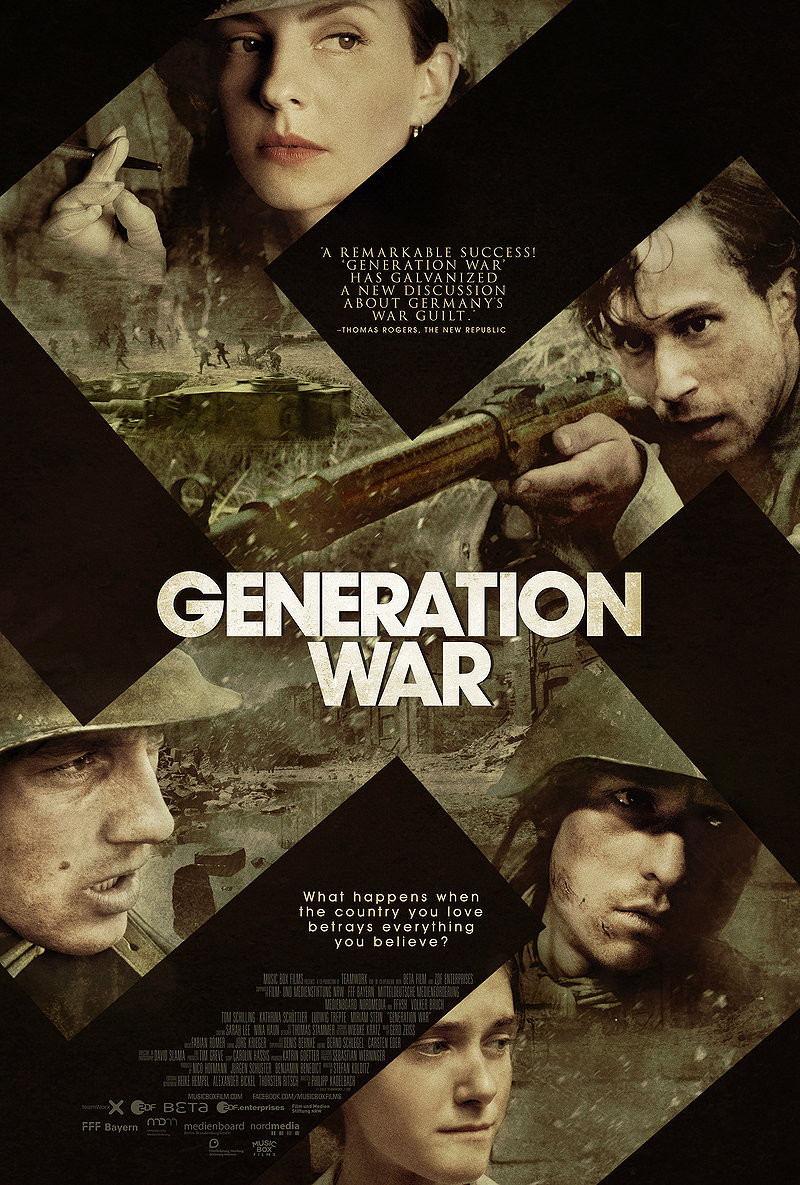 There have been many favourable reviews of this film, just as there have been quite a few scathing ones. Most Polish reviewers have been generally unimpressed, understandably enough, but there have also been seriously critical assessments by one or two German publications. My own opinion, for what it’s worth (speaking as a Brit of Polish descent), is that this is a seriously flawed work, albeit an attempt, of sorts, to get to grips with the experience of so-called “ordinary” Germans. The “ordinary” description is one of the film’s major flaws (more on that later).

A few initial words about the structure of the series as a whole may be in order. A reviewer recently suggested that this was a complex film, in the sense that it deals with several important topics. On the whole, I would tend to disagree. The real complexity, it seems to me, is contained in the convoluted and rather implausible plot and this, in fact, detracts from any attempt on the part of the writer/producer to explore any serious issues. Nonetheless it could be argued that even Charles Dickens very often relied on implausible coincidences as a plot device, so perhaps this is not a cardinal sin in itself.

On the plus side, ZDF does deserve credit for tackling one or two important questions, such as that of former Nazis being employed by the Americans (represented by a cigar-chomping stereotype, incidentally), and, on the whole, it does not flinch from depicting wartime atrocities perpetrated by the German side, such as the savage reprisals taken against Polish villagers in retaliation for partisan activity. It takes courage to have oneself portrayed “warts and all”, to use Cromwell’s famous phrase and, for this, ZDF’s efforts should be acknowledged.

Another of the film’s strong points is the superb acting, particularly in the five leading roles. But the attempt to present these five protagonists as ordinary, indeed likeable, people, is one of the most questionable aspects of the entire production. The idea was, of course, to portray everyday Germans caught up in the maelstrom of war and what these horrific events do to each of them, and this concept cannot be faulted. Their descent into hell is presented credibly, and indeed is undoubtedly the entire point of the series. The huge flaw in all of this is that these characters are by no means ordinary Germans of the time. ZDF has taken a thoroughly unusual and untypical bunch of friends (a Jew among them? In 1941? Even being greeted with a cheerful “Shalom” by his great friend the Wehrmacht officer?) and shown them as if they were ordinary and average Germans of the day. Some commentators have noted that these people are meant to have been friends from childhood but, in my opinion, making one of them Jewish simply does not ring true and can be interpreted as a sop to modern sensibilities, or tokenism by any other name.

The five young protagonists are moreover presented not so much as participants but rather as victims of the Nazi system, even if some, like Charlotte, start out as willing fellow-travellers, seemingly taken in by the poisonous ideology of the Third Reich against her better judgement. No doubt there were indeed people who were caught up in the machine against their natural inclinations. But these five young people seem more like present-day liberal, multi-cultural young Germans who have unaccountably travelled backwards in time to find themselves suddenly confronted by a monstrous and alien Nazi society. By labelling the series “Our Mothers, Our Fathers”, the producers are presenting the five rather sympathetic young people as more or less a typical group of friends of the time, when this patently could not have been the case. 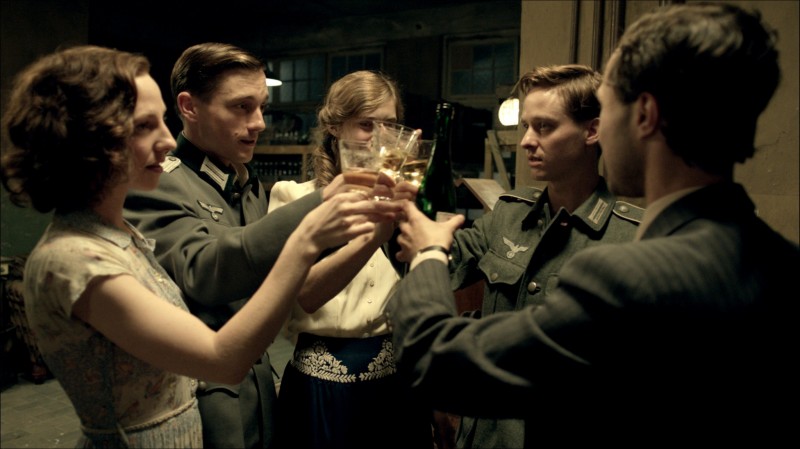 The post-war tendency among some influential Germans—eminently understandable though it may be—has been to highlight the fact that there were individuals and groups who opposed the Nazis. This was undoubtedly the case, and many heroic individuals paid with their lives for such opposition. But even a brilliant film like Das Boot essentially implies that loyal Nazis were the generally unwelcome exceptions in any military formation. It’s difficult to assess, so many years on, whether this was indeed the case. The Germans who were not fanatical Nazis were certainly terrorised into accepting Nazi rule—they had little choice if they wanted to live and prosper, and we in the West have not the slightest idea of what life under a ruthless dictatorship is really like—but there is no real sense in Generation War of the genuine enthusiasm for Hitler which was an ingredient behind the initial military successes of the Third Reich. No doubt reflecting such enthusiasm would have been a difficult feat to accomplish without being exposed to the danger of being seen as in some way condoning or propagandizing the Nazis. The nearest we are offered in this film to a genuine believer is the character of Charlotte.

There are other questions this series raises, such as: why does the war only start in 1941? Why is Viktor friendly with Wilhelm in the first place, since Wilhelm is someone who, if not necessarily personally responsible for the deaths of Jews in Poland during the September 1939 campaign, would most certainly have at least witnessed the barbarity of the invasion? Why is the bigos-eating Polish resistance so brutal that they are prepared to sacrifice whatever Christians there may be in the freight cars simply because they hate Jews so much?

The Polish element of the film is troubling, to put it mildly. Most Poles are shown as being even more anti-Semitic than the Nazis themselves. No sane person would deny that anti-Semitism existed in Poland—but the scenes in Poland do look like a subtle attempt to spread a bit of the blame onto brutal and barbaric Eastern neighbours, even if one partisan is shown to be marginally less brutal than the others.

Another general point is that by leaving out any references to battles against the Americans or the British and focussing instead on an anonymous Russian enemy, the series does rather look like an attempt to appeal to the English-speaking market.

I wouldn’t go as far as one reviewer who described the series as a ‘nazification’ of history. It could be described as a distortion tending dangerously close towards revisionism, but few people could seriously argue that the fanatical Nazis are shown as anything other than evil. The problem lies elsewhere. Since the series cannot be accused of any attempt to justify Nazi crimes, its main failing is, I believe, the unwillingness directly to confront the worst single excess of the Third Reich: i.e. The Holocaust. As many reviewers have noted, where was the attempt to annihilate an entire people? There was no mention of industrial-scale genocide as such and only the briefest of references to the death camps. The closest allusion was the freight car packed with prisoners. (Viktor, by the way, was more likely to have been held and then gassed at Sachsenhausen near Berlin at the time in question than to have been sent to Poland).

Perhaps the ordinary German soldier was unaware of what was going on in the camps while he was on the eastern front, but the rest of us most certainly know now. For ZDF to more or less ignore the Holocaust is not the same thing as Holocaust denial, but it comes perilously close. The action of a film like Das Boot which I mentioned earlier, with its mostly confined, indeed, claustrophobic environment, does not pretend to present a panoramic vision of the war, whereas Generation War, even if we accept the omission of the years 1939—1941, does try and present virtually the entire eastern front, Poland included. So why no depiction of the death camps?

There is an allusion to Auschwitz, provided by a caption at one point, but ZDF are clearly assuming that a reference will be enough for the viewer: that everyone knows what enormous horrors are hidden behind this name. This is a huge mistake, in my opinion. What about a hypothetical fourteen-year old TV viewer in Seattle or Lagos or Bangalore or Melbourne who might be watching this and who is seduced by the riveting ‘Saving Private Ryan’ style action sequences? As a war movie it is undoubtedly successful in its portrayal of the horrors and brutality of battle. The problem is, what would such a hypothetical viewer take away from all this? Unfortunately, and here I don’t mean to sound condescending or elitist, many viewers will get their history from TV rather than from books. It is a mistake on the part of ZDF to assume any prior knowledge of the Holocaust on the part of every viewer. Their argument may well be that many other worthy German films have already dealt with the subject. But such a glaring omission can be interpreted, and indeed is being interpreted by many reviewers, as a deliberate downplaying of a horror which many people are still trying to get to grips with.

To offer a bit of balance to the previous rather negative comments, I think that ZDF should not, of course, be regarded as necessarily representative of all German opinion. The Germans, on the whole, have had an exemplary attitude towards their own recent past. They have had an enviable model democracy since the war and are, generally speaking, a welcoming and generous society. There will always be exceptions, of course. The neo-Nazis are active in Germany as elsewhere and there are the occasional old-school unreconstructed diehard Nazi sympathisers whose attitudes, much like any other extreme nationalists, are beyond shifting. But at least the Germans have, by and large, attempted to come to terms with their recent and painful history, unlike some other nations.

On balance, ZDF should be given credit, despite their simplistic, clumsy and, frankly, offensive portrayal of the Poles, for an attempt at confronting the war years. But given the astronomical number of victims of the Nazi regime, it is not such an easy thing to try and put a human face on Hitler’s army.

If I were reviewing this for any of the online sites, I’d probably be generous and give it three stars out of five with the comment: “watch it once, but don’t expect a history lesson.”

10 thoughts on “All Brutal on the Eastern Front: A belated view of ‘Generation War’”