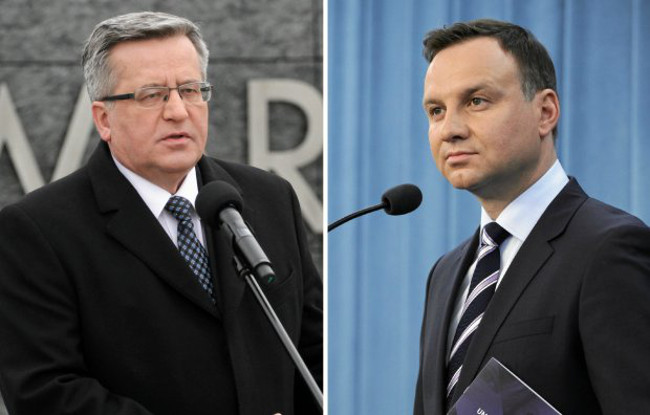 Poland’s mainstream presidential candidates will fight the second round of the election on May 24, but it was a non-party rock star who made the headline as first votes were cast.

Andrzej Duda (Law and Justice – PiS) and Bronisław Komorowski (independent, but funded and supported by Civic Platform – PO) won the majority of the votes in Sunday’s first round, but neither had a clear majority to win the election outright. Mr Duda was top, with 34.7% of the vote, and Mr Komorowski came second, winning 33.7%%.

Behind them was singer Paweł Kukiz, who garnered 20.77% with his ‘anti-partyocracy’ campaign, a clear signal that Poles are dissatisfied with both of the main options.

Mr Kukiz said he refused to back Mr Komorowski in the second round, and the PiS candidate has said that he would be willing to enter into talks with the rock star.

However, analysts are undecided as to whether support for Mr Kukiz in the first round will translate into victory for Mr Duda in the second. There is a strong opinion that Mr Kukiz was the ‘safe’ protest vote for those who would normally support Mr Komorowski, and that they will swing back in favour of the incumbent president rather than voting for the official opposition.

Mr Duda was in Warsaw on Monday morning, campaigning for the second round.

He said: “I won the first round because people expect the Republic to be fixed.”

Mr Komorowski said he would call a national referendum to address three questions. One, of using the single mandate system – where voters elect a named candidate rather than a party list – was one of the centerpieces of Mr Kukiz’ campaign. The second will ask whether political parties should be cut off from state funding, and the third will ask whether legal ‘grey areas’ in tax law should be settled in favour of the taxpayer.

Mr Komorowski and Mr Duda are also expected to take part in a head to head TV debate before the second round of the presidential election. Bookmakers place Mr Duda as the favourite to become president after the May 24 ballot.

CORRECTIONS: The article has been amended to distinguish between official and exit poll results and to clarify Mr Kukiz’s position on the two remaining candidates.