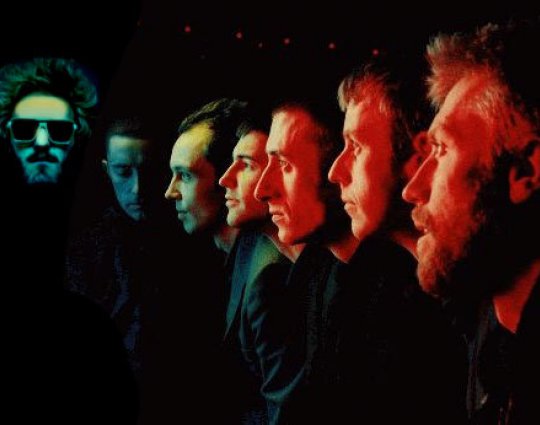 Everything that happens in life you take with you. It becomes a part of you and colours the way you express yourself. So naturally, when Jason Swinscoe and The Cinematic Orchestra took the stage at Klub Studio, it all came pouring out.

A large part of a Cinematic Orchestra live show is based on improvisation. Swinscoe, leader and founding father of the band, plays samples which the instrumentalists and singers then improvise over. Other aspects are more traditional, like their hit song “To build a home,” which has been featured in many TV shows and films.

The great thing about proficient musicians playing improvisational music is that it hits you from several angles at once. Take the drummer, Luke Flowers, for instance. In addition to being the funkiest white man since John Bonham, he has that mystical sleight of hand that leads you to believe he is actually speaking through his kit. And when his viscous beats are layered with melody, and Tom Chant’s saxophone gently pierces the air, the Klub Studio main room is transformed into a blank page for the artists on stage to fill.

A biological theory called endosymbiosis explains how certain bacteria at one point in evolution infested human beings. We provided the bacteria with a safe environment, while they, in exchange, became an integral part of the energy making components inside our cells. And when the soundscapes during the first part of Cinematic Orchestra’s concert washed over the crowd, a similar co-dependent relationship was proposed. With the band saying to their audience: “If you let us in, we will leave you something to grow on.”

If you care for labelling music with genres, I could tell you that it was a nu-jazz concert. I could probably get away with telling you it was electronica, even though it featured a full band. And, though not to a large extent, I could even say some of it was pop music. Depending on which part of the concert you wish to emphasize, an evening with The Cinematic Orchestra inhabits many genres. However, for many, this sort of compartmentalization in music is unnecessary at best. And when a band is able to rise above their definitions so seemingly without effort, the word “timelessness” comes to mind.

When speaking of Krakow as a cultural city, it seems logical that these kinds of bands choose to stop by here. The room was filled with kids in skinny jeans hanging over the rails of the balcony, middle aged jazz aficionados drinking beer from plastic cups and swaying to the beat, and everything in between. Although one might have thought the concert would be inaccessible to people not experienced with improvisational music, I was happy to see that the large crowd that had gathered seemed to accept the band’s invitation, and that a level of symbiosis was achieved.

Everything that happens somehow gets absorbed, and living in Krakow you are faced everyday with the history that surrounds you. Swedish singer/songwriter Lars Winnerback has described Krakow as “a city that has risen from sorrow, and wants to get by on its own.” However, standing among the crowd at Klub Studio this evening I am struck by a notion of internationalism. The nu-jazz concept seems to have an ancient resonance, and if you listened with your eyes closed, you could have been anywhere in the world.