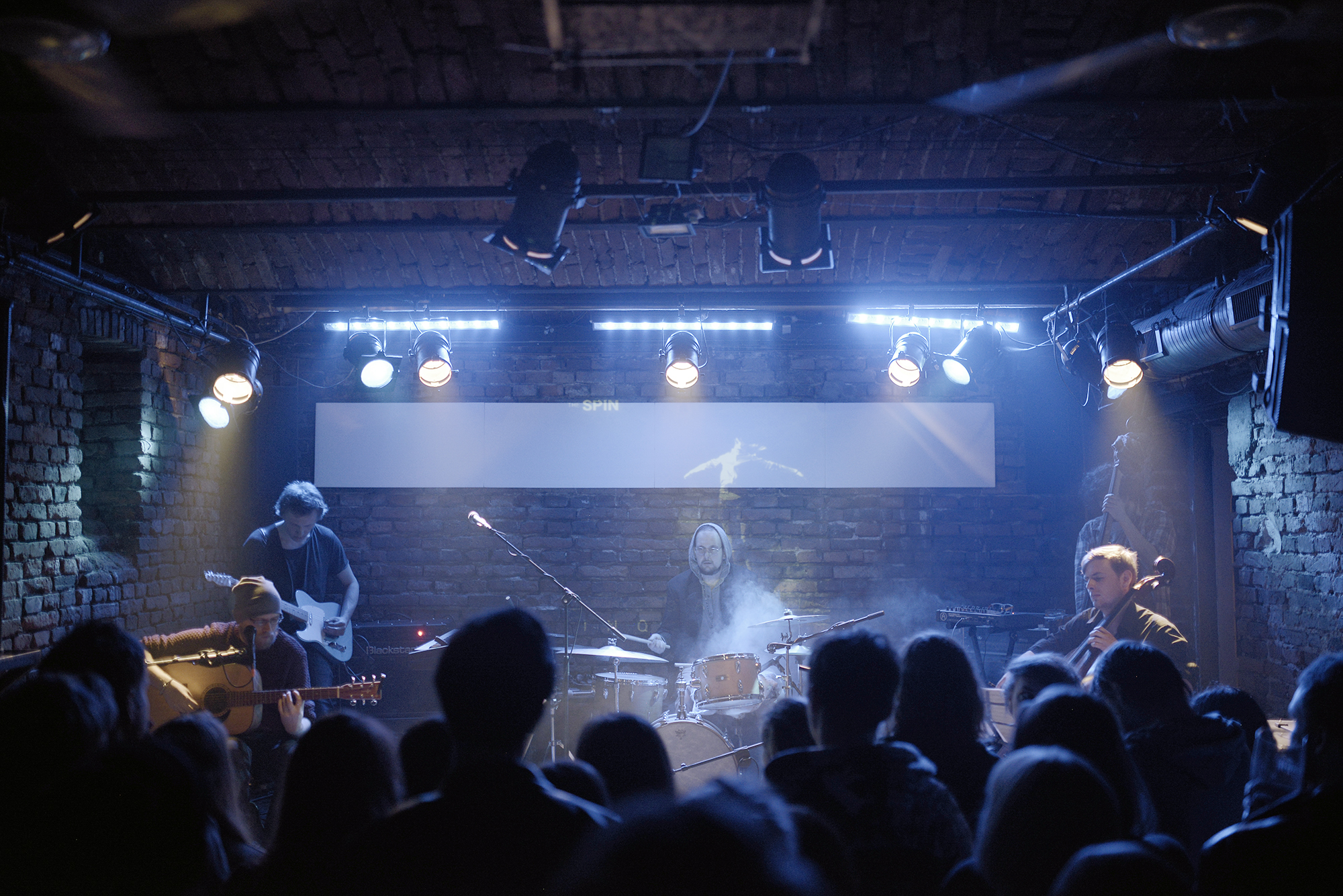 Entering the downstairs room at Alchemia on a Saturday evening, I once again register the sharpening of senses that occur when approaching an anticipated event. The first moments of a concert are often the best. The sound is turned up high, and, as your eardrum tightens to protect against the banging of drums, adrenaline starts rushing through your body—it’s finally the weekend.

This particular night though, as I am finding a spot in the crowded, smoke-filled stage room below Plac Nowy, no such thing happens. Whereas one usually has to readjust from the volume of the regular world to the sonority of concerts, it could seem the sound guys at Alchemia have designed the inverse experience. Or maybe they just forgot to turn up the volume.

The band on stage is called Inqbator. Or rather, Inqbator (real name: Jakub Bugała) is on stage with his band. And amid the rather shy amounts of sound, he is in the process of captivating his audience. You could probably hear a pin drop between chords.

The band is a five piece operation. Upright bass, cello, drums, Jakub in front with his characteristic falsetto voice, acoustic guitar and pedals, and another member switching between carefully picking an electric guitar and laying out synth chords.

Inqbator released his EP The Spin in November of 2013, won the Skoda Auto Muzyka in 2014, has played multiple festivals since then, and is also engaged in other projects as a producer. With his woolen hat, dirty sneakers and glasses, it is tempting to label Jakub Bugała a hipster, and for this reason it feels liberating to partake in his musical expression. Namely an expression devoid of irony. He states that his inspirations revolve around folk, ambient, and electronic music, and traces of these various sources make themselves apparent throughout the show, as the band jumps from airy ballads to cowboy grooves and Radioheadish ambiance.

After the set is done, they are cheered back on, and perform two songs as encore. First Inqbator solo with his guitar, and then he brings the band back on for the last song of the night, a beautiful piece with lyrics revolving around the theme of perfect moments.

All though this was Inqbator’s first performance with this lineup, and there is always room for improvement within a band in the start pit of it’s career, looking around the room you could still see that they managed to instill in their audience that glazed look of appreciation, evident of musical connection.

The combination of chant-like lyricism, delicate vibrato of cello strings, and conscientious emotion in Jakub Bugala’s voice accomplished the goal of music several times this night. Namely, creating those perfect moments. They appeared, they went, and when the show was done we were all an experience richer. An experience we can look forward to telling people about, when in the autumn of 2015 his debut album will be released, and people will ask if we’ve heard of this new guy on the indie scene called Inqbator.

(You can find more information about Inqbator, including future show dates, on their Facebook page.)