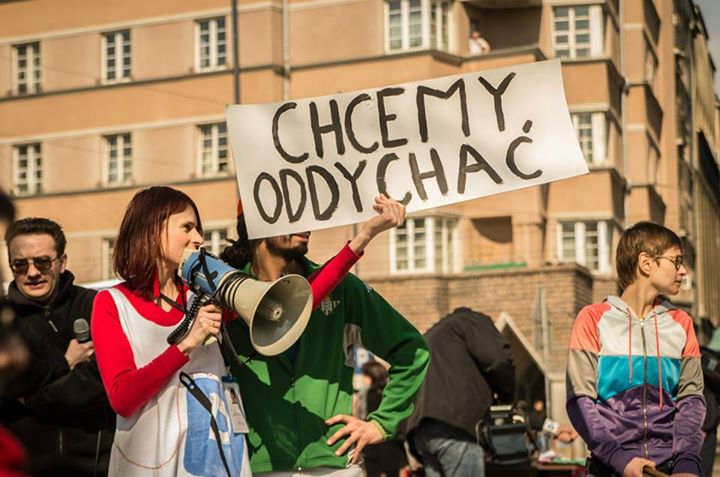 Cracovian performance artist and activist Cecylia Malik staged a demonstration last Saturday at Park Krakowski near Plac Inwalidów against a city plan to construct a parking garage beneath it.

The event drew dozens of participants, including a team of caped and cone-hatted “dwarf” organizers who shared the park’s history through a megaphone as well as gowned seamstresses sewing, on site, colorful patchwork wraps for the trees bearing the names of supporters. It was billed as “Nici z parkingu”—a clever pun, as it directly translates as “Threads from parking” but has an English meaning along the lines of “So much for parking.”

Not everyone was supportive of the protest. One man angrily confronted one of the organizers, art historian Anna Baranowa, recommending that they should instead be supporting the construction of underground parking structures that could also be used defensively in wartime.

However, the prevailing attitude of passersby seemed to be support, or at least interest. Baranowa told us that it wasn’t the first time the project had faced opposition, citing another demonstration several months ago supported by Krakow Presidential candidate Tomasz Leśniak and many who had thwarted a similar effort at Plac Biskupi. She plans to organize an official standing group dedicated to the protection of Park Krakowski and others.

It also wasn’t the first time Malik has used her artistic clout to stir waters and promote a cause. Last autumn she drew both praise and criticism for an event in front of Bunkier Sztuki in which participants wearing anatomically semi-accurate nude suits hung apples from the trees and pressed cider in support of a visiting art group.

You can see photos from last Saturday’s event at Park Krakowski by Agata Zu Jabłońska in the gallery below.