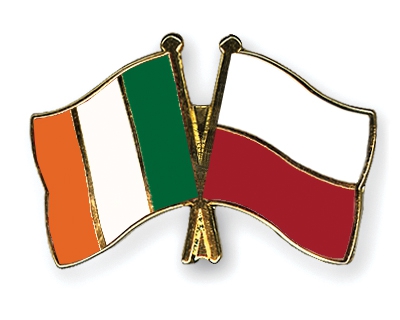 St. Patrick’s Day. The scene of Krakow drowning in zielone piwo and blasting The Corrs might seem a little offbeat, but in fact Poland and Ireland share a long history of connections.

Historians like trans-European researcher Norman Davies claim to trace the links as far back as several thousand years, when the Celtic tribes who settled in Ireland also inhabited lands far to the east, especially in modern-day Silesia. Remnants include Celtic ironworkings in the Holy Cross Mountains of central Poland as well as rivers and villages which bear etymological roots from that time, such as the town of Legnica whose name can be traced to the Celtic word for ‘fortress’. Some even say that the legend of King Krak and the dragon at the heart of Krakow’s origin bears distinct Celtic influences.

As it happened, the Irish and Polish peoples would come to share a lot of similarities. Both have large and devoted groups of Roman Catholics. Both have been regularly bullied and oppressed by their neighbours. And both are forced to put up with flukes of weather that would make most civilisations quail.

It’s for these reasons that in the 19th century the Polish partition by Russia, Prussia, and Austria became something of a cause célèbre among the Irish people. Protestants and Catholics, moderates and extremists alike across the English channel continually expressed their support for Polish independence, with lectures on the subject being held to raise money for wounded Polish rebels while regular newspaper editorials championed the struggle. However, many were keen to use the situation to their own advantage as well by putting pressure on Britain for hypocritically supporting independence for Poland but not Ireland. The Irish Nation, for example, published a short poem:

She, sad Sorrow’s elder daughter-she, ‘the Poland of the Seas’.

That wasn’t the end of Ireland’s friendship with Poland, though. The two countries continued to enjoy cultural cross-pollination with the likes of figures such as Casimir Markievicz, an artist, playwright, and theatre director who lived in both Dublin and Warsaw. The ascension of John Paul II to the Papacy did even more to rekindle interest in Poland among Catholics abroad, and in 1979 the Irish Polish Society was founded in preparation for the Pope’s visit to the island at a time when only about 350 Poles actually resided in Ireland.

It was more than lip service, though, as the Irish Polish Society proved themselves dedicated backers of the Polish people during martial law under communism. Starting in 1981 they organized concerts, vigils, and other events to raise money for the cause. Polish artist Ula Retzlaff-O’Carroll, living in Dublin at the time, even exhibited a Christmas crib featuring a Wojciech Jaruzelski puppet dealing with the Devil. All in all, over a period of the 14 months Irish shipped £250,000 worth of medicine, powdered milk, and baby food and clothes for free from Dublin to Szczecin for distribution.

Indeed, the special relationship continues today. In May 2004, when Poland joined the European Union, Ireland joined only the UK and Sweden in welcoming Polish workers to its shores. Numbering 122,585 in the 2011 census (2.7% of the population), Poles now make up the largest minority group in Ireland. Multiple media outlets exist to cater to Polish expats in Ireland, such as the free Polish weekly Nasz Glos (Our Voice).

So whether you’re paying respects the Church of St Patrick in Warsaw, making an actual pilgrimage to Ireland for the Polska Éire Festival from 21-29 March set to coincide with the UEFA Republic of Ireland vs. Poland qualifier, or simply enjoying a pint of Guinness set to Celt rock at Stary Port here in Krakow, remember that Poland’s ties to Ireland run deeper and longer than just one day out of the year.

(Grateful acknowledgement is made to Krakow Post contributors/Irishmen Mike Doherty and Kevin Cullen as well as our readers for corrections and suggestions.)

9 thoughts on “Ireland and Poland: A History of Solidarity”