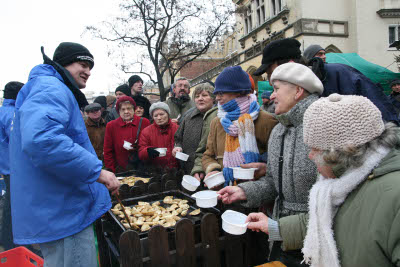 The 10th annual event has become the biggest holiday gathering in Poland where those who have resources share with those who haven’t. It is far from the only such event, however. Many cities reach out to the poor during the holiday season.

The cooks at the Krakow event prepared about 6,000 liters of mushroom soup with pasta, six tons of cabbage with mushrooms and 100,000 homemade dumplings.

“Ten years ago I had no idea that Christmas Eve on the main market square in Krakow” would become so big, said Jan Kosciuszko, owner of the Chlopskie Jadlo restaurant, who started the tradition.
When he initiated the program, he said, he hoped it would become a tradition that spread to many location – and it would involve people of means helping those without.

Mayor Jacek Majchrowski and Cardinal Stanislaw Dziwisz are among the notables who have embraced the event.

Ninety percent of those who ate on the main market square this year were needy, meal organizers said.
Christmas is Poland’s most important religious holiday. The Catholic Church tells its members that those with means should celebrate Jesus’ birth by helping the less fortunate.
In almost every Polish home at Christmas Eve there is a place at the dinner table for anyone who wanders in.
If someone comes to the door unexpectedly, the tradition is that the host invites him or her to eat the 12 traditional Christmas dishes with the family.

The tradition started in the 19th Century when many families reserved a chair for a family member whom the Russians had sent to Siberia for fighting for Polish independence.
In many Polish cities local governments, private sponsors and volunteers put together a Christmas Eve meal for the poor.
In Wroclaw the event is associated with one determined woman, journalist Wanda Ziembicka. She has been organizing a Christmas meal for 20 years.

“I do this for very poor people, for the lonely, ill and those abandoned by relatives,” she said. “The disabled and multi-children families come as well.”
So many people look forward to the event that “sometimes at the beginning of September people ask me if they will receive an invitation,” Ziembicka said.
Ziembicka prepares for the event by sending a letter each year seeking donations from 300 companies, businessmen, editors, actors and politicians.

“I ask them to put together parcels with the most important necessities, such as sugar, tea, coffee, flour and rice,” she said.

At the Christmas Eve event, those in the crowd get raffle tickets. Numbers are called, and every person receives a gift.
“I remember that once a man who had a big family received a parcel in which there was food – and 500 zloty,” Ziembicka said.
It is a tradition that if the beneficiary of a gift knows who the donor is, he must express his thanks. When the man with the big family sent his appreciation letter, the donor was so pleased that he gave the family another 1,000 zloty.

Katowice also has a Christmas Eve meal for the homeless and poor.
Bishop Gerard Bernacki told the 60 Silesians at this year’s event to fill their hearts “with love, kindness and goodness. I wish you on this Christmas peace, joy and kindness.”
Non-governmental organizations estimate the number of homeless in Poland at between 80,000 and 130,000. The number in Katowice has grown each year over the last several years, the mayor’s office said. Last year about 5,000 people got help from homeless programs.

Gdansk has a Christmas Eve meal program that gets the young involved in the spirit of the season. Since 1989 students from all the universities in the Pomeranian region have staffed the Kitchen of Santa Claus, cooking soup every Thursday for the homeless and poor.

They prepare special meals on Christmas Eve and Easter for the 90 or so people they serve.
Lublin held its 8th Christmas Eve meal program this year. The main organizer was the Dominican Order.
When the Old Town event was first held, it was only for the homeless. Now it’s for everyone.

Residents, including people dressed as angels holding candles, wander through the streets singing Christmas carols. At the main market square the carolers take part in the most important part of each Christmas Eve – sharing wafers and good wishes.