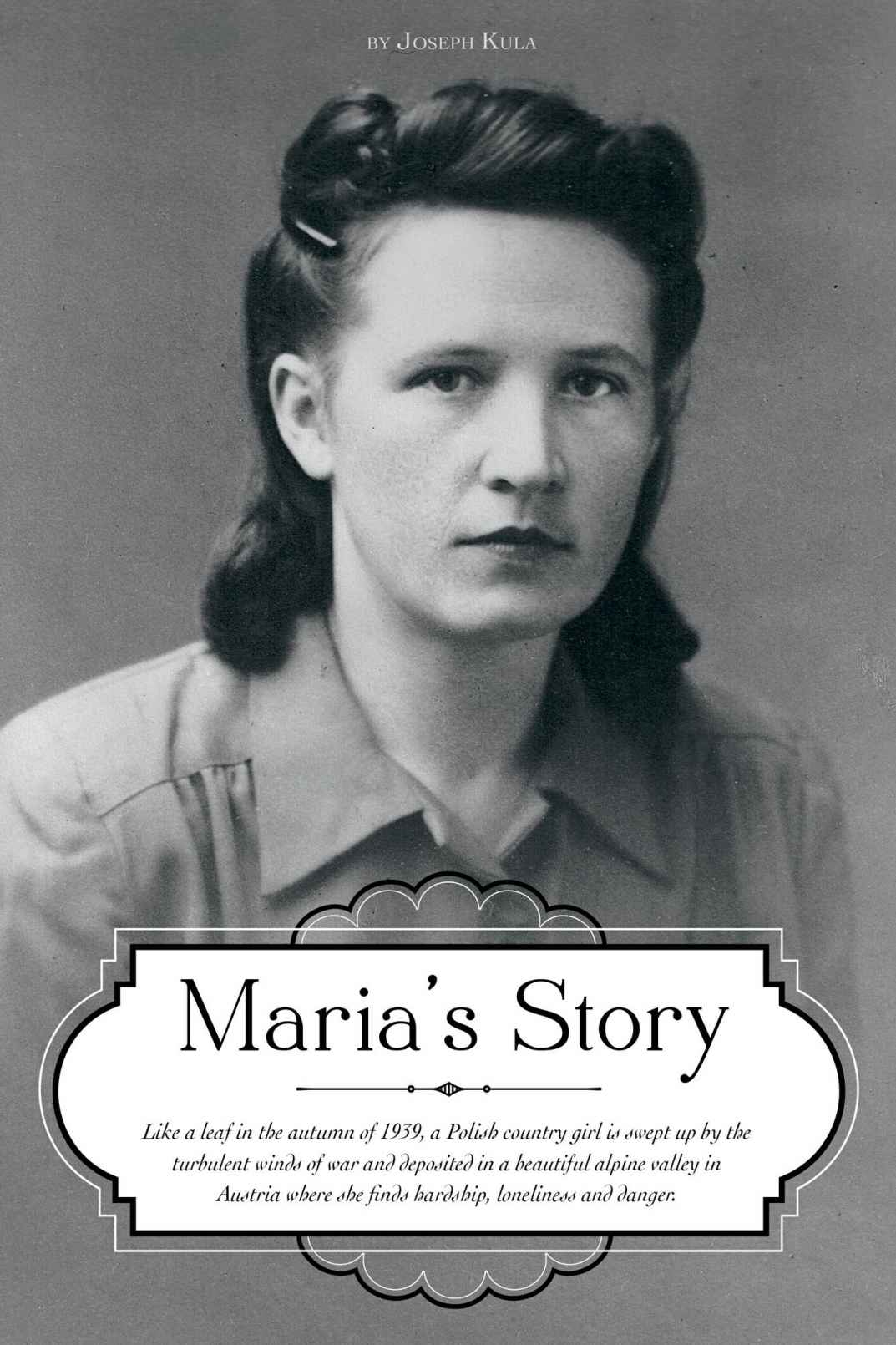 Like a leaf in the autumn of 1939, a Polish girl is swept up by the turbulent winds of war and deposited in a beautiful alpine valley in Austria where she finds hardship, loneliness and danger. And this is just the beginning of her incredible journey. 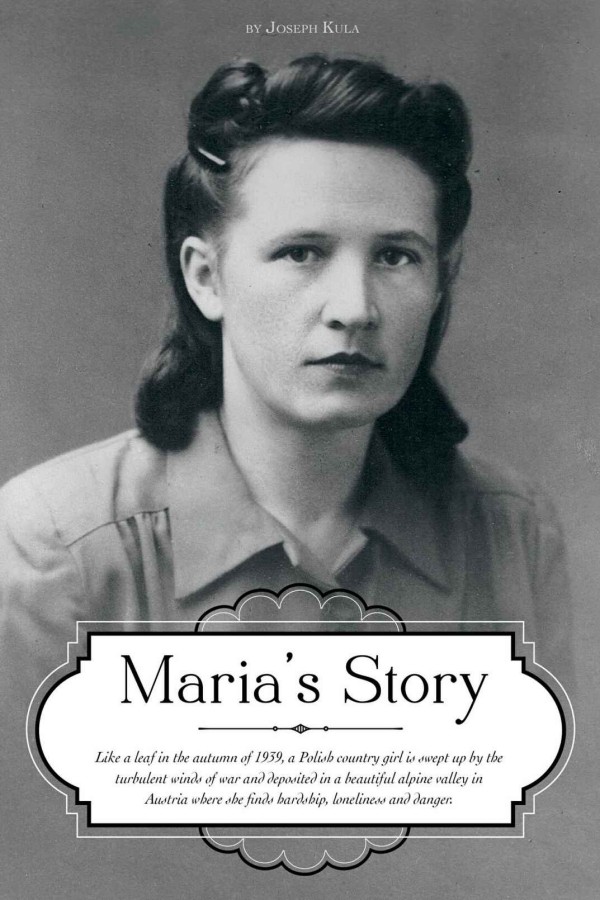 I remember well, the first of September, 1939. It was off to bed early for me the night before. As I drifted off to sleep, I dreamt I was lying on a bed of soft grass in the warm sunshine alongside a gentle-flowing stream on Father’s farm in Borzecin. My dream evaporated when I heard voices. I jumped out of bed and took a few steps to peek into an adjoining room where, sitting at a table, were some Polish army officers, their shoulder decorations gleaming in the light. Quickly, I went back to my room wondering what they were doing here—and so late at night. I looked at the clock. It was three in the morning.

I went back to bed but couldn’t sleep. My mind was racing. “What was my landlord doing, sitting with those officers?” I kept asking myself. I must have fallen asleep again for, before I realized, it was five o’clock. It was the church bell that awoke me. Soon there were more bells… and sirens. The noise was alarming.

I jumped out of bed and saw my landlady standing in the hallway, holding her two children to her: “My God! War! War!” she cried over and over again. I stood like a dummy in a store-front window. I couldn’t speak; I couldn’t move. Then the bombs started falling. The drone of the bombers enveloped the city like a tornado. Our beloved city was being attacked!

Waves of panic washed over me. When the fear subsided for a while, images of my father flashed in my mind’s eye and I remembered his descriptions of action in the First World War in which he was conscripted to fight in the Austrian Army. But in those days, there were no bombers.

Now the bombs were for real. The whole of Kraków was shaking. We ran for the basement. When the boom-boom eased off for a while, we came back up. But, without warning, the aerial attacks intensified. The bombs seemed to be coming closer. And we ran for the basement again. We kept running up and down, up and down. The bombardment continued day and night. On the second day, I thought, “How could I go to my sister? If I could only go to my sister everything would be all right.”

The following morning, the bombs kept falling. Some seemed to fall nearby. Kaboom! Kaboom! We were living in constant fear, not knowing what to do. When I looked out the window, I saw an incredible sight. Cracovians were running away from the city. They carried little bundles, leaving all the rest of their earthly possessions behind. Women carried infants, clutching them close to their bosoms.

At that moment, I also decided to run away from the madness. But first I had to make my way to my sister’s. I gathered up a few things— personal things—and said good-bye to the lady of the house, who had been so very good to me. She had taught me how to cook when I was still so very young. As I left, I thought to myself: “I’ll come back when the war is over.”

The next thing I knew I was outside on the street, running. The street was full of people, all going somewhere in a big hurry. And the bombardment began again. Some of the bombs seemed to fall nearby. We hugged the buildings for cover, hoping that this evasive action would somehow spare us. But thanks to God the bombs were falling around the city. The heart of the city, the historic part, somehow was spared.

Finally I made it to my sister’s place. “No harm can come to us here,” I thought. “Here we will be safe.” My sister shattered my illusion: “We also must run,” she said in a sad tone. “Sister, we have to run.”

I was scared, shaking all over. But at the same time, I was glad to have my sister with me in this time of crisis.

Quickly we grabbed coats and a few things for our pockets. We made the sign of the cross and out we went into the street. We had no idea when and if we would ever come back. We were thankful we had no children to worry about.

Poor Cracovians. They were streaming out of the city. Women, children, the elderly, invalids, and us joining in the exodus. Fear gripped the entire city.

We ran day and night. The moon was shining. The stars were so bright we could count them. Night looked just like day. But now was not the time to admire their brilliance. The second day of our exodus was a lovely day, but to us it was a sad day and could just as well be overcast to reflect our somber mood. We were tired, hungry. And for the first time we heard the noise of artillery. We were close to the front. Somewhere Polish soldiers were still fighting. Warplanes were also buzzing around us. We could hear shooting. When the action got too close, we ran for cover under the trees. The road was very narrow. I could not remember the place but it was close to some farms. In a while, things quieted down. Then we heard some noises in the distance, getting closer. We heard voices, coming nearer all the time.

Then we saw them. Polish soldiers. They were retreating from the front. They were tired and hungry just like us. And they were yelling: “Where are you going? Ladies! Children! Go back! Go back!”

“Wojna!” (“War!),” they shouted. “Druga Wojna Swiatowa!” (“The Second World War!”) On the frantic urgings of the soldier we decided that we must go back toward Kraków. There was no choice. On our retreat we walked ever so slowly, our heads bowed. The din of war did not abate. We heard heavy planes over us. But no bombs this time. In the city, it was quieter. There were no trams running. No people, no dogs, no cats. Nothing. Just like a plague had swept the land and everyone had died.

The next morning we heard a commotion close to us. The noises were coming from a nearby tobacco and cigarette factory. We looked out and we saw an unusual sight. People in the factory were throwing packages of tobacco and cigarettes out onto the street. I said to my sister, “Let’s get some cigarettes for Father. We will take them with us when we go for vacation.” That’s how I was thinking. I wasn’t thinking of the war.

“Let’s go,” Stefania said enthusiastically. We took a few pillow cases and out on the street we went, very cautiously. And as we started to fill the pillow cases, we heard a voice.

“Hande hoch!” (“Hands up!”) They repeated the order in Polish. Shaken, we dropped our loot and slowly raised our hands above our heads. We saw soldiers in blue-grey uniforms. They yelled out orders. “You can’t take anything!” they commanded. We had no choice but to obey. Looking around we saw rows of tanks, their menacing gun barrels pointing at us. Motorcycle-mounted soldiers had their rifles trained on us.

We kept on standing there with our hands high. The Germans repeated in Polish: “Don’t take a thing! Go home, close your doors and windows until further orders.”

A curfew descended on the city. We sat inside for two days and two nights. On the third day in the morning, very carefully we looked out the window. We saw strange soldiers everywhere. They were marching on every street. A sea of blue-grey uniforms. We couldn’t see one civilian person on the streets. Just blue-grey. Sadness took over our hearts. We were sure we were going to die…

Maria’s Story is available in print and electronic forms through Friesen Press.

Joseph Kula is a journalist, author, and former long-time travel editor of the Vancouver Province newspaper. He is based in Delta, British Columbia.