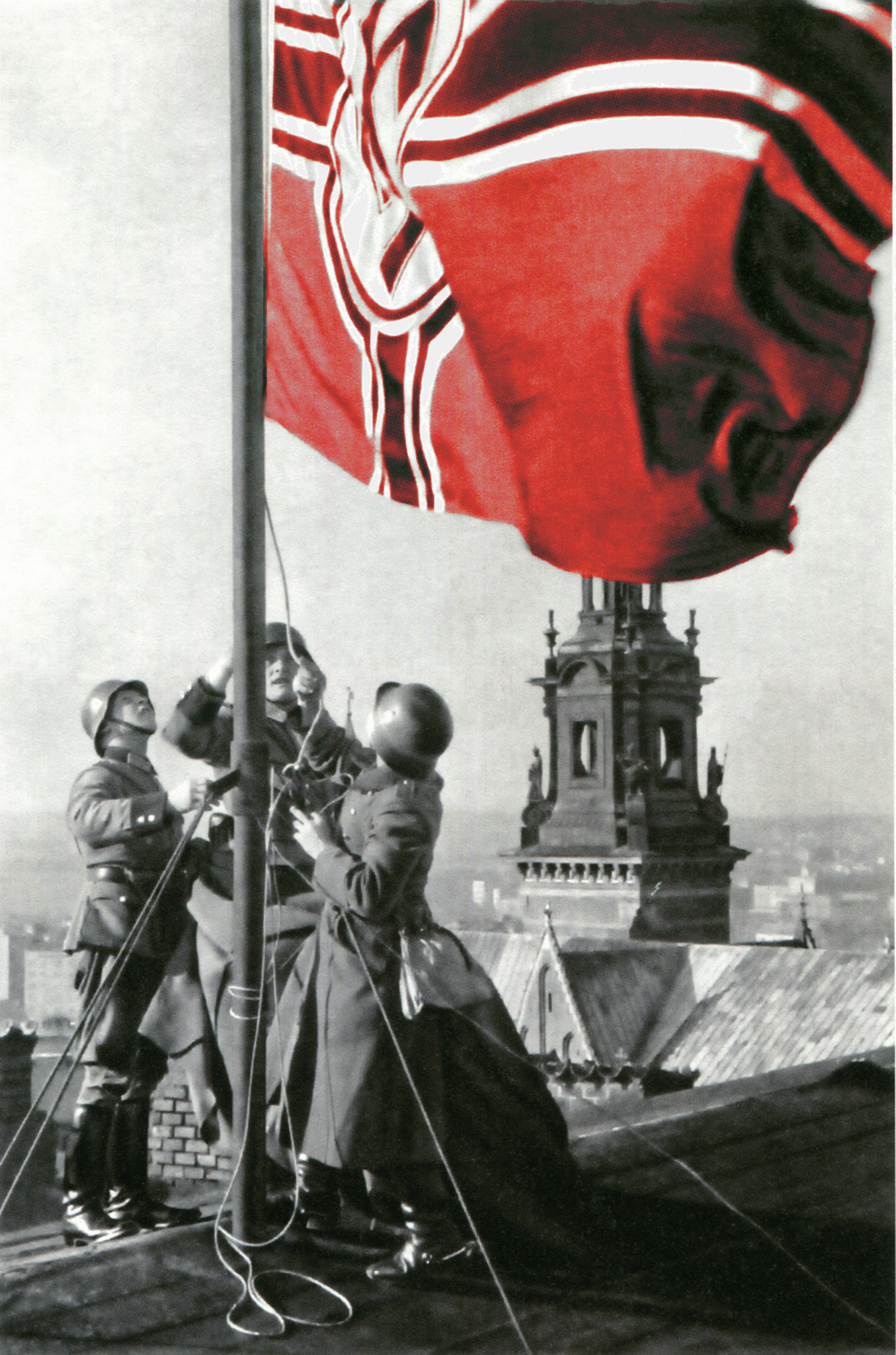 Krakow is a city of contradictions. It hums with the mythical; the legendary; with secret shadows and stories and Slavic spirits. As our boat floated down the star-speckled Wisła on a cold night two Februaries ago, me only recently arrived, my Cracovian companion pointed up to a high window of Wawel Royal Castle that still glowed with yellow light and said, “The Princess is combing her hair.” It was easy to believe. Yet from the other side, from the top of Sandomierska Tower, one can glimpse the gray buildings of a former ghetto just across the river. There, through the smog, opposing the conceit of fantasy lies the actual history of the grim and bloody realities of war, occupation, and genocide, and this too can be believed.

“Wawel always created a separate world in itself,” wrote Adolf Szyszko-Bohusz, the famous Polish architect and conservator who spent much of his career before, during, and after the war on the Castle. “In this microcosm is reflected in miniature all the events of Polish history, sometimes as if a brighter edit of what happened elsewhere across the homeland.” As such, its role as the headquarters of the Nazi occupation provides a telling perspective on that epoch.

Of course, it knows ghosts older than that. Humans have occupied Wawel Hill for at least 50,000 years. The better part of the Royal Castle itself was built in the 14th century under the storied reigns of Kazimierz III the Great, Jadwiga, and Władysław II Jagiełło, and it was modified and augmented throughout the centuries under Poland’s myriad regimes. Then, when German and Soviet forces rolled into Poland in the autumn of 1939, Krakow was chosen as the capital of the western sector for security reasons, and Hans Frank was installed at Wawel as the Governor-General.

Frank was a consummate Nazi—in fact one of the Party’s earliest members. In his days as a lawyer, he had argued that the courts served “to safeguard the concrete order of the racial community.” As Hitler’s personal legal advisor, he had been instrumental in the Führer’s initial rise to power within the Weimar Republic. Then, within the Reich, Frank was one of the strongest voices for the extermination of the Jewish and Eastern peoples.

He relished his new role at the Royal Castle. His domineering wife Brigitte immediately began styling herself as Königin von Polen (“Queen of Poland”), and Frank played at being King. At Wawel he held a coronation ceremony of sorts, rolling up in a huge black Cadillac surrounded by swastika flags. He headquartered his administration in Kurza Stopa (the Hen’s Foot Tower) and adjacent rooms on the first floor of the Castle, and he had an office building constructed for himself over important archaeological remains, a building which today houses the library.

There was luxury, too, including a theatre and an enormous bathtub. The latter was described by Frank’s son Niklas—a small child during the occupation and later his father’s most virulent critic—as “senseless… It was of such proportions that the whole troika of Kruger, Himmler, and [Frank] could easily fit into it.” Hans Frank was also a chess aficionado, and he was delighted to host Ukrainian grandmaster Efim Bogoljubow at the Royal Castle.

Of course, the occupation went far beyond cultural effrontery. The Nazi’s secret Generalplan Ost (Master Plan East), which Hans Frank helped shape, detailed far more darkly ambitious aims—essentially, to annihilate the civilisations of Poland and its neighbours entirely, creating a permanently stunted underclass that would serve a new land nur für Deutsche (for Germans only). It was for this reason that most everything was renamed, down to the streets themselves (although the only rebranding widely enforced upon penalty of jail was that of Rynek Główny, the main square, which became Adolf Hitler Platz). The best parks, theatres, and other facilities were reserved for the city’s German population, which grew during the Occupation from 1 to 7-8%.

In fact, though, it seems that many Cracovians, especially in the middle and lower classes, felt ambivalent about the Germans’ presence. The Reich invested more in the city than any other in the territory, and some Poles even complained that the infrastructure improvements made in Hans Frank’s Krakow had “had to wait until the Occupation.”

Yet the Nazi authorities had a way of quickly dispelling any dreams of eventual peace and normalcy that may have been brewing. For example, though Cracovians largely tolerated the urban cosmetic alterations which included the removal of several famous Polish monuments, bystander Karolina Lanckorońska wrote that it was different with the statue of the beloved poet Adam Mickiewicz, which was destroyed in August 1940:

We were […] devastated, not so much by the very loss of that not-so-beautiful monument (“we shall make another, and a more beautiful one after the war” we thought), but rather by that telling demonstration of who the Germans really were. […] Krakow, usually so peaceful, was deeply shattered—it was then that the ordinary people who initially seemed to be pretty impressed by the Germans “went berserk” for the first time.

The fate of Wawel Royal Castle was another example of the offensive Nazification of the city. Renamed Krakauer Burg, Polish people were banned from visiting except in the capacity of construction workers or cleaners (such as, at one point, Roman Polanski’s mother). Guarding it all was a new gated arch of stone, through which hundreds of tourists now pass daily.

Not all was lost, of course. Though many of the renowned works of art Wawel had come to house over the centuries were lost, stolen, or destroyed during the war, many were saved by the forward-thinking Castle staff beforehand, including the tapestries of Sigismund II Augustus and the Szczerbiec coronation sword, which found their way west across Europe and the sea to ultimately arrive in Canada for safekeeping. Then there’s the Castle itself, which, though wired with dynamite by the Nazis at one point, obviously survived for the most part when the occupiers fled. Hans Frank, the pretender-king of Krakow, was arrested in Bavaria and survived multiple beatings and suicide attempts to be ultimately hanged at Nuremburg.

The rest of the country was not as fortunate as the Castle. Warsaw was leveled to the ground and Poland had lost nearly a quarter of its population, and more dark days lay ahead behind the Iron Curtain. But if, like the architect Szyszko-Bohusz said, Wawel is a Polish microcosm, then he himself could be one for the Polish people. During the war, he had been forced against his wishes to design an enormous Reichsadler (an eagle clutching a wreathed swastika) for the Wawel gate during the occupation, but afterward he quickly got to work remodeling to repatriate the home of Poland’s old royalty. “Let the Castle’s safety from destruction,” he said then, “be an encouragement for the future.” As he wished, it was and remains an important symbol of Polish identity and resilience—and maybe even magic.

Grateful acknowledgement is made to Wawel Royal Castle Deputy Director Jerzy T. Petrus, Communications Department Head Sabina Potaczek-Jasionowicz, and the staff of the Library for their assistance in researching this article. Some statistics and quotations were also found in a very interesting paper by Jagiellonian University Professor Anna Czocher, “Kraków or Krakau? Polish Citizens’ Reactions to Transformations of Urban Space by the Nazi Occupying Forces,” which appeared in Frontiers and Identities: Cities in Regions and Nations (Plus-Pisa University Press, 2008.).

3 thoughts on “Looking Back 70 Years: Wawel Under Occupation”