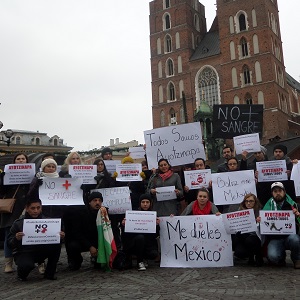 More than 40 people met in the main square of Kraków on Saturday 22nd November to open the debate about what is happening in Mexico. Luisa Luna Carrillo, one of the organisers of the event, explained who they are: “We are just a group of Mexican people living in Kraków, and some students of Latin American studies at university, who are very tired of corruption  and injustice of the political system in Mexico”.

They raised their voices because of the 43 students from Ayotzinapa, who, on 26th September, were travelling to Iguala (Guerrero, Mexico) to take part in a protest. During the journey,  local police intercepted their bus and in the struggle that followed six people died, 27 were injured and 43 students were arrested. The details about what happened are not very clear and the final investigation concluded that after being held in custody, the students were handed over to the local group Guerreros Unidos (“United Warriors”), a crime syndicate that presumably could have killed them.

“It is not only because of the 43 students from Ayotzinapa, but because of the thousands dead people that have been suffering, because of all the disappeared, kidnapped, extorted and murdered people in Mexico”, continued Luisa Luna Carrillo who explained that only in 2013, more than 10,000 people died because of the organised crime in Mexico.

Most of the assistants brought banners to show why they think it is necessary to start the conversation about the situation in Mexico. Mottos like “Ya me cansé (I have had enough)”, “No más sangre (No more blood)”, “Vivos se los llevaron, vivos los queremos (They took them alive, we want them alive)” and “Todos somos Ayotzinapa (We are all Ayotzinapa)” adorned the banners that they created for the picture and the video filmed during the event. 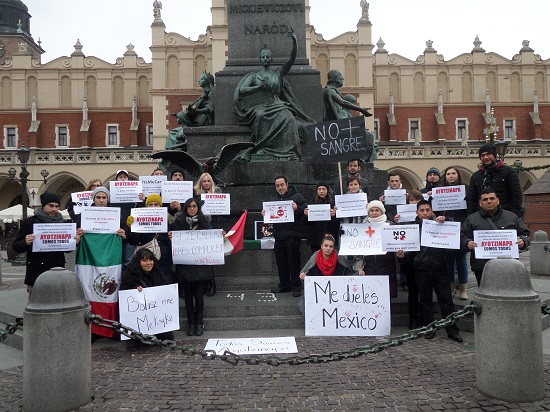 “We want to show some solidarity to the people in Mexico, and also to gather together in order to start opening the conversation about what we can do to make a change. We don’t believe that it is only the government that must be blamed, but also we, as a modern society, we need to do our part”, said Luisa Luna Carrillo. For this reason, she confirmed that they will create a small group in Kraków to discuss the next actions and keep the debate alive.

She also encouraged people to sign a letter against repression and criminalisation of civil protests in Mexico. You can read the full letter and sign it in different languages, not only in Spanish and English, but also in German, French, Portuguese and Italian.

If you want to find out more information about the future events related with the Mexican community in Kraków, check the Facebook group Mexicans in Krakow.