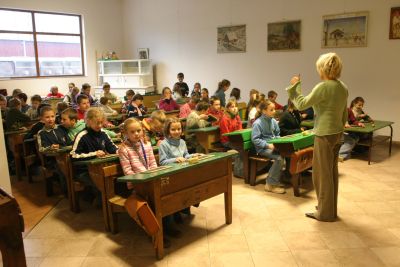 Together, the two may change the face of Polish education. Their plans include creating a voucher system under which students could go to the school of their choice.

They say bringing a free-market system to education would make schools better because they would have to compete for students.
Lackowski and Hall have been calling for school reform for years. In addition to vouchers, they want a system that shifts control of schools from teachers and administrators to parents. They also want a system in place that allows the government to revoke the licenses of incompetent superintendents and teachers.
Teachers have too much power today, they feel. Teachers union rules require equal pay for equal length of service – which means that poorer teachers get the same money as much better ones. The rules almost make it difficult to fire a teacher with four years or more of experience.

Lackowski believes there is an urgent need in Poland for a student school-choice system like the ones in the U.S., New Zealand and Sweden.

School choice can come through vouchers, by giving schools additional tax money for each student they attract, and by granting autonomy to schools in choosing the curriculum and profile of teaching. A voucher would be equal to the cost the government pays for one student’s education. Each student going to a school would have a voucher, so the more students, the more money the school would have.
“Of course before introducing educational vouchers we will need to analyze the cost of educating individual students and compare it with the amount of government revenue assigned for education,” Lackowski said.

One drawback of a voucher system would be that unless special arrangements were made for village schools, they would suffer under the reform.

That’s because voucher-system success is based on large enrollments, which bring in a lot of money, and village-school enrollments are small.
In fact, if a school budget were linked entirely to the number of students, village-school vouchers would be unable to cover the schools’ costs, Lackowski said.

“We are afraid that the educational voucher” will bring “racial segregation at schools,” Klosowski said. He said he also worried that “parents, especially in rural areas, will have to drive their children several kilometers” to get to the schools the children want to attend.

The need to improve rural schools is so pressing that Klosowski’s reservations are inane, Lackowski said.

“The deterioration of education in rural areas, where year after year more and more students do not pass their exams and thus do not continue school, is a huge problem,” Lackowski said.

“With school vouchers, there may be three times more money for rural areas,” he said. “Vouchers improve the equality of education. Better teachers should go to rural areas and be better paid.”

Krakow already has a voucher system but it is not the kind that Lackowski and Hall envision. It does not give parents the increase in power and responsibility that the Lackowski-Hall system would because it does not allow students to choose their school. They must go to the one to which they are assigned.
“It must be changed,” said Jaroslaw Gowin, a member of the upper house of parliament from Krakow.
“Otherwise people will become discouraged about a really good idea.”

The Krakow voucher system does include one provision of the system that Lackowski and Hall advocate, however: It bases teachers’ salaries on the number of students they teach rather than the number of classes.

Another key difference between the Krakow voucher system and the system that Lackowski and Hall want is that Krakow principals have no authority to manage their schools’ finances. In other words, they can’t shift money from one category of expense to a category where there is a greater need.

National educational officials decide how much a school gets – and the categories where it is spent.
By being able to send their child to the school of the family’s choice, parents would in effect become managers of public-education funds.

“In such a situation parents show their power in the educational market,” Lackowski said. “And the school principal, when talking with parents, is aware that he is speaking with the co-owners of the school.”

Creating public support for reform means convincing Poles to change the way they think about education, he said.
“People must see that reform is an opportunity, not a danger,” he said. The key is getting the public to understand that “competition improves the level of education.”

Under a voucher system, the best public schools wouldn’t have to beg any more for money for elective courses – those the Education Ministry doesn’t require. Neither would the best schools have to beg for money for facility renovations.

Private schools also would be likely to embrace vouchers. That’s because the voucher system would allow students to go to either private or public schools. With money from vouchers, private schools could reduce the fees they charge parents.

Henryka Bulat of Krakow, the mother of a junior high school girl, is one parent who likes the idea of vouchers.
In deciding which school her daughter attends, she said, the voucher system will her to “take into account schools’ achievements.”
They would include the number of students in a school who had passed their comprehensive exams, the number of students who had won citywide or regionwide academic competitions, the number of electives a school was offering and the condition of the school facility itself, she said.
“If I can influence the financing of a school, why not?” she asked.

A Krakow teacher who wanted to remain anonymous said it is hard for her to predict what would happen under a voucher system because few details of the system have been made public.
However, she said, her sense is that “if there is a good principal who fights for his school then the level of education (under a voucher system) would be raised and that would be good for children.” Without an aggressive principal, however, the voucher system could cause such “huge problems” that a school’s quality could diminish rather than improve, she said.
Lackowski has so far offered no timetable for a voucher system or other educational reform.

However, he said, “it would be best to introduce reforms gradually.” In the case of vouchers that would mean introducing them “in big cities at a secondary school level and afterwards gradually extending them.”

“Vouchers should have been introduced in cities a long time ago,” he said. “There is no reason there to assign students to schools in specific districts when it is possible for them to travel by public means.”.
Hall said vouchers could show up as early as 2009.
“I am sure that any changes should be introduced very carefully, gradually and have been given thorough consideration,” she said. Educational reform should be reform and not revolution, she said.
Many teachers are likely to oppose a voucher system, of course, because it threatens the way the do business. Teacher association leaders are already posturing on the proposed change.
Slawomir Broniarz, the chairman of the Polish Teachers Union, contends the voucher system would violate the Constitution in terms of unequal access to education and also laws on how local governments spend their money.

Lackowski answers:
“There is no need to change the constitution because education would still be free,” Lackowski said. “We need to eliminate the teacher’s card” that gives teachers too much power over education, he said. “Poland needs a determination to succeed, and the question is if Polish politicians will have that same determination.”

Another teachers union objection is that, in abolishing the current school assignment system, the voucher system would create problems that would be difficult to deal with.
For example, union leaders say, what happens when many more students want to attend a school than it can admit? What would be the criteria for deciding which students would get into that school and which would not?

Some student groups dislike the idea of vouchers, too.
Artur Juszczyk, co-leader of the student organization Initiative Against Paid Studies, contended that “the educational voucher is the first step to privatizing education. We think that education is a right, not a commodity, so it should not be subject to the rules of free market.”

Those who are unsure whether the voucher system will improve schools can get an idea by looking at what happened in Koszalin, in northern Poland.

That school system used vouchers to introduced a journalism class, a ballet class, speech therapists, psychological counselors and career specialists.
Although vouchers are an interesting idea, many people in and out of education believe that whether they will be a success in Poland will hinge on that old adage “The devil is in the details.”