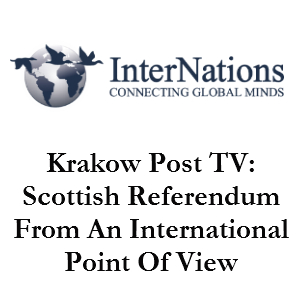 With the referendum on Scottish independence looming, Krakow Post TV went along to the InterNations meeting in Krakow to get an international perspective on the issue of whether the Scots should break away from the United Kingdom.

The InterNations gathering took place on the C.C. Stefan Batory – a floating restaurant and conference centre on the Vistula River on August 28. As always, people from many different nations currently living in Krakow were there to socialise and make new connections.

The Krakow Post’s Managing Director, David McGirr – himself a Scot and a firm supporter of Scottish independence – asked a few of those assembled about their views.

Most of the Poles asked, agreed that independence was a good idea for Scotland. Beata Maaga, who has lived in The United Kingdom, is convinced: “Scotland would do much better if it was independent.”

On the other side, Evan DeBarra from Ireland would vote no: “I can understand why many people are on favour of independence but, with my experience in Irish history, I think independence and nationalism are overrated and people have more in common across borders than divided by borders.”

Watch the video interviews for the full range of views:

You can find out more about historical Polish/Scottish links in our feature Scots in Poland, Poles in Scotland.

You also can check the YES Krakow Facebook group to find out more about the referendum.

12 thoughts on “Views on Scottish Independence From Krakow”