You’re probably used to seeing brown water around Krakow’s tram tracks when it rains. Maybe you’ve asked yourself why that is. Maybe, on a dry day, you’ve experienced clouds of fine, iron-red dust thrown up by the traffic. It’s rust from poor quality rails, which is not particular healthy, especially in Europe’s third-most polluted city.

You might ask yourself why they don’t clean the roads more effectively. You might wonder why other European cities with trams don’t have the same problem. I’m referring specifically to the new tracks laid since Poland became an EU member in 2004, and the European procurement rules for large projects became applicable.

Go from ul. Starwiślna over the Powstańców Śląskich Bridge and then left along ul. Limanowskiego towards Kalwaryska to see what I mean. The tracks are of such low quality that they need constant maintenance. It is not unlikely that you may think that inferior materials have been used to build these tram tracks. An idea that is supported by the dilapidated condition of what are rather new roads.

Low bids for construction, low quality materials at high prices, bad procurement procedures, poor supervision and inadequate construction techniques are the usual causes. A friend of mine asked maintenance workers on the night shift about the state of the tracks. They complained of poor materials, or a total lack of materials for vital jobs. 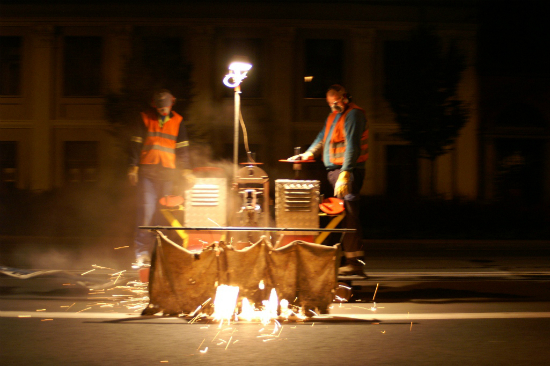 Maintenance workers on the night shift

When you see relatively new roads and bridges in a dilapidated state the same questions come to mind: Why? What can be done to prevent such things? It is us citizens who pay the bills and it is us who are suffering the consequences. Why is there such an uncomplaining attitude among the public? A lack of civic awareness? Do people just not care about the city they live in?

The city authorities are responsible for the public domain, and they don’t seem to care either, which has a negative influence of the quality of life of the city’s inhabitants. The city belongs to us, its citizens, not to the authorities. If they disrespect their own citizens, the authorities can’t expect respect from the citizens. Authority is not a synonym for respect.

Civic awareness means being critical about the state and maintenance of the public domain, and holding the authorities responsible for it. This attitude can force the authorities to change their attitude. Citizens should take note of the quality of their work, and take appropriate action when it is below par. Don’t forget, we pay the bills.