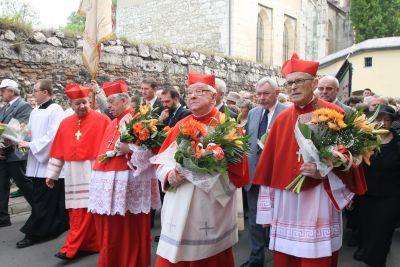 “Prime Minister Donald Tusk has backed away from a campaign pledge to sign the EU’s Charter of Basic Rights because he needs President Lech Kaczynski’s support for a more important goal ? Poland’s passage of the EU Reform Treaty.

Tusk is afraid that if Poland signs the rights charter, which Kaczynski opposes, the president will use his influence to prevent the reform treaty from becoming law.

Because most EU countries have ratified the treaty, EU leaders will sign it at their summit in Lisbon on Dec. 13. Poland must ratify it before it can hold the EU presidency position.
Ratification of treaties requires a two-thirds vote of Poland’s lower house. Tusk’s ruling coalition, consisting of his Civic Platform party and the Polish Peoples’ Party, has only a 10-seat majority in the 460-seat lower house.

Many members of the conservative Law and Justice party oppose provisions in the rights treaty dealing with families, including language that gives tacit approval to homosexual marriages.
Although Tusk had campaigned in favor of ratifying the rights treaty, he said in his 185-minute inaugural speech on Nov. 23 that he wouldn’t ask parliament to consider it.

Poland thus becomes the second EU member to opt out of the treaty. In making its decision, the British government heeded employer groups. Employers had said they feared that the charter would strengthen union rights, including the legal right to strike and secondary picketing.
As a consequence, Britons and Poles who feel their human rights have been violated will be able to take their cases before the European Court of Human Rights in Strasbourg.
The presidents of the European Parliament, the European Council and the European Commission signed the charter in Nice, France, on Dec. 7, 2000.

The declaration, which is without legal force, specifies a range of civil, political, economic and social rights that EU residents should enjoy. The rights are divided into six sections: Dignity, Freedoms, Equality, Solidarity, Citizens’ Rights and Justice.
The charter includes such traditional rights as the right to life, freedom of expression, equality before the law, and freedom from discrimination. It also includes rights stemming from recent technological developments, including provisions dealing with data protection and bioethics.

Provisions in the charter that deal with marriage and family are the ones that have energized Polish politicians. For example, the charter recognizes ways to create a family other than marriage. And it does not refer to marriage as being between men and women, which opponents say is a tacit recognition of homosexual marriage.

Although most of the charter’s rights apply to everyone, the document also recognizes categories of people with special needs, including children, the elderly and people with a disability.
Nicole Fontaine, president of the European Parliament, said at the charter-signing ceremony in Nice that the document would become “”the point of reference for all the Parliament acts which have a direct or indirect bearing on the lives of citizens throughout the EU.””

The Law and Justice party-led coalition that ruled Poland until the Civic Platform party’s victory on Oct. 23 announced Oct. 4 that it wouldn’t accept the charter. That government was led by Prime Minister Jaroslaw Kaczynski, the president’s twin brother.
The Kaczynski government said it feared that charter provisions dealing with moral and family issues would have legal consequences in Poland because they contradicted Polish law.
As an example, Foreign Ministry spokesman Robert Szaniawski said: “”We won’t be able to prevent possible interpretations of law made by the European Court of Human Rights which could lead to changing the definition of the family and force Poland to accept homosexual marriages.””
At the time, Tusk said neither his Civic Platform party nor his planned coalition partner, the Polish People’s Party, had any problems with the charter.
“”I don’t notice, in contrast with some observers ? including Polish bishops ? important dangers which were written into the charter,”” Tusk said. “”In our view, The Charter of Basic Rights of the EU would be useful not only to our community (within Poland) but also to Poland as a part of the European community.””
The Left and Democrats party said it also supported the charter.
After the election, Kazynski let Tusk know he would fight charter ratification. Tusk decided to capitulate on that issue so he could obtain ratification of the Reform Treaty ? the first political defeat of his young prime ministership, observers say.
The International Helsinki Federation for Human Rights, the European Commission and
European Parliament members of the Left and Democrats have urged Tusk to keep his campaign promise of seeking ratification of the charter.
They contend that the Law and Justice party’s threat to prevent ratification amounts to political blackmail.
Tusk said discussions with Lech Kaczynski indicated that if the government pressed for charter ratification, Reform Treaty ratification will be in danger.

He said he needed Law and Justice’s support to obtain the two-thirds majority required to ratify the Reform Treaty. Poland cannot become president of the EU in 2011, as scheduled, unless it ratifies the treaty.

Law and Justice members, the Catholic Church and Polish religious groups such as the Association of Christian Culture applauded Tusk’s about-face.

Catholic groups were most critical of a charter provision that read: “”Any discrimination based on any grounds, such as sex, race, color, ethnic or social origin, genetic features, language, religion or belief, political or any other opinion, membership in a national minority, property, birth, disability, age or sexual orientation, shall be prohibited.””

Catholic leaders said the provision was tacit recognition of homosexual marriages in Poland. However, charter experts pointed out, the document also has a provision that says: “”The right to marry and the right to create a family shall be guaranteed in accordance with the national laws governing the exercise of these rights.””

“”The Polish church doesn’t have a negative opinion about the charter”” over-all, said Piotr Babiarz, a political expert who is getting a doctorate degree at Cardinal Stefan Wyszynski University in Warsaw. It appreciates language in the charter referring to values rooted in Christianity, he said.
He said the church also respects provisions of the charter connected with social and ethical values such as human dignity and respect for cultural identity.
What it objects to are provisions that appear to condone cloning of humans and “”to a definition of marriage which is against natural law,”” he said.

A number of other Catholic countries in the EU don’t have concerns about the charter, however.
“”Malta, where the Catholic religion is written into the Constitution, and as a result has the (EU’s) most restrictive law connected with marriage, has no objections to the charter,”” according to Jacek Protasiewicz, a European Parliament member of the Civil Platform party.

“”Our European partners understand our situation,”” Tusk said of his political dilemma. That argument might not convince many Poles.

And his capitulation on the charter suggests that, once more, Poland is isolating itself from the rest of Europe ? an allegation often level against the more conservative Law and Justice government.

Professor Bronislaw Geremek of the Democratic party said he “”doesn’t understand the countries which are afraid of the charter.”” He said Poland’s decision to opt out “”will be harmful for Europe and Poland as well.””

Professor Wladyslaw Bartoszewski of Warsaw State University said Poland’s decision against ratifying the charter is both a sign of intolerance and a slap in the face against European law.
Those who back ratification ask how Poland can talk about human rights with other countries, especially with rights violators such as Belarus, if we won’t sign an EU-wide rights charter.
“