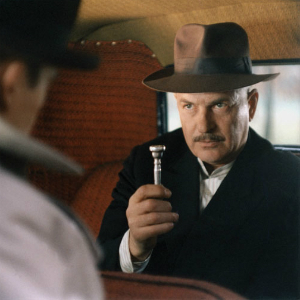 Polish cinema doesn’t have many family dynasties like the Sheens or the Douglases, but it does have father-and-son duo Jan and Juliusz Machulski.

Director Juliusz even succeeded in revitalising his father’s acting career with his debut, Vabank (1981) – a caper film set in the 1930s. The young Juliusz had been given the chance to live and breathe those few US movies distributed in Poland, thanks to his father. It’s not a coincidence that he later became the pioneer of socially uncommitted cinema in his own country.

Despite a dogmatic prologue, aligned with the cinematic moral anxiety that ruled 1970s Polish cinema, Vabank quickly reveals itself to be a comedy caper. The plot has legendary safecracker and trumpet player, Kwinto (Machulski Sr.), being released from prison and seeking revenge for the death of his friend.

It is reported that Machulski Jr. watched George Roy Hill’s classic The Sting so many times while filming Vabank that he knew every scene by heart – and it shows. Vabank’s lack of originality is compensated for by a charismatic performance from Machulski Sr. Paradoxically, Machulski Jr. instantly became a rebel filmmaker in his homeland by replicating mainstream Hollywood tropes.