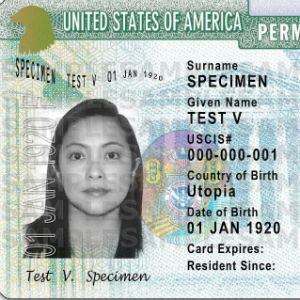 Not a refugee, a skilled professional, or closely related to a US citizen? Not a problem! Try the Diversity Immigrant Visa, or, as it’s more commonly called, the Green Card Lottery, and perhaps you can get your hands on one of the permanent residency cards the US offers annually to 50,000 randomly-selected participants.

To some, it might uncomfortably evoke the dystopian values of The Hunger Games, the recent book/film series in which second-class citizens must brutally compete for recognition by the wealthy and decadent Capitol. Others see it as a fairy tale, a Cinderella story waiting to happen – more like the animated classic An American Tail, in which a ship full of European immigrant mice belt out: “There are no cats in America, and the streets are paved with cheese!”

That film was released in 1986: Democracy was then still a dream in a Polish People’s Republic freshly scarred by martial law. John Davis, the US Ambassador at the time, marveled, “The US occupies such an exaggerated place of honor in the minds of most Poles that it goes beyond rational description… It derives from our economic prosperity and lifestyle, enjoyed by 10 million Polish-Americans and envied by their siblings and cousins left behind.”

Now, the year is 2014. I, an American who did the opposite and worked hard to immigrate to Poland, ask those Cracovians who were “left behind” what they think of their relatives and acquaintances who made the jump across the pond.

“I’ve heard that they became really shallow and materialistic,” says one young woman, who also denounces the aforementioned film as propaganda for children. “At least that’s what it seems like on Facebook.”

“They got so fat,” another volunteers as soon as I broach the subject. “Wait, are you going to print that?”

The numbers reflect this shift in attitudes. These days, the majority of Polish emigrants seek better fortunes in the UK or Germany, which require no visas or transatlantic odysseys. This places Poland among the ranks of around 170 countries that contribute fewer than 50,000 annual immigrants to the US, making Poles eligible for the Green Card Lottery.

All that’s required is a high school diploma or two years of experience in one of several hundred job fields – plus a little luck. With around a 1.5 percent chance of being selected if you’re European, the odds are significantly better than in most cash lotteries.

When the program was started in 1990, the members of the US Congress who crafted it all but admitted its purpose was to encourage more European (read: white) immigration in the wake of a three-decade influx of racial minorities. In fact, for several years, it was designed so that 40 percent of the winners were Irish.

Since the mid-90s, though, it has been open fairly to most countries of the world. Demand has been high: in some countries it’s created an entire industry of Lottery registration facilitators, and more than nine million people globally have applied for 2015.

One of them is Andrei Sidorenko (or Sid Andrews, as he’s already anglicized it), a 44-year-old Ukrainian IT specialist living in Krakow. He’s been frustrated in his attempts to emigrate to the US, Canada, or the UK for years and only recently discovered the Diversity Immigrant Visa application online by accident.

“I don’t usually win anything,” he shrugs, “so I’ve never trusted lotteries.” If he wins, though, he will certainly go, he imagines, to Virginia Beach or Hawaii: “Someplace warmer where there is less rain than in Poland.”

The temperate forecast may be a far cry from that of “No Cats in America,” but the Green Card Lottery doubtless helps shore up lingering Polish fascination with the idea of the American Dream. After all, lotteries are only for amazing prizes and fantastically lucky winners, right?

The program has its detractors as well. Some critics say it’s unfair to more skilled workers and immigrants currently residing in the US on temporary visas (or none at all) who may be sent back to their countries of origin.

Others fear it provides an easy in for terrorists, like Egyptian Hesham Mohamed Hadayet – a Lottery winner who went on a shooting spree in Los Angeles International Airport in 2002. Congress has made motions to end it several times, nearly succeeding in 2005.

The State Department and American representatives in Poland have consistently declined to comment, and journalists are barred from visiting the facility in Kentucky where applications are processed.

There are as many stories as there are people

Then there’s the mundane, little-discussed realities of winning. Of those selected, only about half will actually make it to the final stage (after investing in the pricey, non-refundable medical and processing exams). Not to mention the 22,000 who received congratulatory letters in 2011 only to be informed that they were due to a computer glitch.

Finally, many who actually make it to the US on the Diversity Immigrant Visa find themselves jobless or vastly overqualified for the menial jobs they are able to get, and some simply return to their homeland disillusioned.

“Is it fair?” pondered Zuzanna Mendez, a 34-year-old Pole living in Chicago. “I don’t know. Probably not. But there are as many stories as there are people.”

Having become enchanted by the US on a summer trip, she wasn’t deterred. She twice tried unsuccessfully for a Diversity Immigrant Visa before winning a different kind of lottery – falling in love with her now-husband, an American who himself immigrated from Mexico. Now she’s raising two kids there and has recently set up her own photography business.

Had I finally found a 21st century Pole infected by the American Dream?

Hardly. “Don’t let the glorified movies fool you,” she said. She still thinks that life in Chicago is easier than in Poland, and she reports greater open-mindedness and cultural diversity. However, she said that being an immigrant in the US is “not for lazy people,” and admits that she regularly finds herself missing the cafés and tiny cobbled streets of Krakow’s Old Town, not to mention her extended family here – who are largely unable to visit.

So does the Diversity Immigrant Visa make sense in a country whose streets are paved with neither gold nor cheese?

Among many Americans, there remains a sense that their country is exceptional and that immigration is a key part of that story. As President Barack Obama (whose father was Kenyan) said in June: “Throughout our history, we’ve come here in wave after wave from everywhere understanding that there was something about this place where the whole was greater than the sum of its parts.”

Bob Goodlatte, however, a Republican Representative from Virginia, disparages the sentiment. He’s been trying to abolish the Diversity Immigrant Visa for years, and he blames his failure on “a definite feeling that we’re the land of opportunity and blah-de-blah.”

Maybe he’s right to dismiss the American Dream as a myth, and in 2014 he has more than a few Poles behind him. For millions of aspiring immigrants, though, it’s still a prize worthy of a Lottery.

7 thoughts on “Why Poles Play the US Visa Lottery”