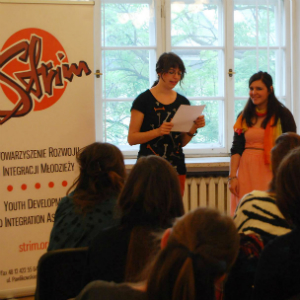 Not all those young foreigners you meet in Krakow are here for carefree fun as Erasmus students. I first came to Krakow with the European Voluntary Service (EVS). It was a great experience, and I wish more people knew about it.

There are now more than 40 EVS volunteers in Krakow every year – but not a lot of people know what EVS is. I must admit, the first time I heard about it, I thought it was an internship, like the Leonardo programme.

It was September 2011. I was in La Puerta del Sol, Madrid, when I met a friend from college who was going to Amsterdam for a year to work with a news agency writing features in Spanish about South America. It sounded like a great opportunity, and I wanted to find out everything about it.

After torturing my friend with too many questions, I learned that EVS covers almost all of a volunteer’s costs: you get free food, accommodation, private insurance and pocket money. EVS also pays 90 percent of travel costs.

EVS is very similar to the US Peace Corps – young people volunteer to work in another country. The differences are that EVS is for volunteers from EU nations, and that volunteer terms are between two and twelve months, rather than the two years in the Peace Corps.

I was sold. My friend put me in touch with the organisation that had sponsored her, AIPC Pandora, which soon became my organisation too.

The European Voluntary Service is a programme supported by the European Union Commission, framed in Erasmus+, for people aged between 17 and 30. To volunteer, you need to find a sending organisation in the country where you live (in my case, Spain) and a hosting organisation where the project will take place.

I was a little worried about the requirements, but one of the great advantages of EVS is that you don’t need a university degree or a language certificate to get in – you just need to have the motivation and patience to do it.

Cristina Villena, a current EVS volunteer in Krakow, compared it to another popular EU program: “EVS is not as closed as Erasmus, which is only for students. It is open to everybody.” 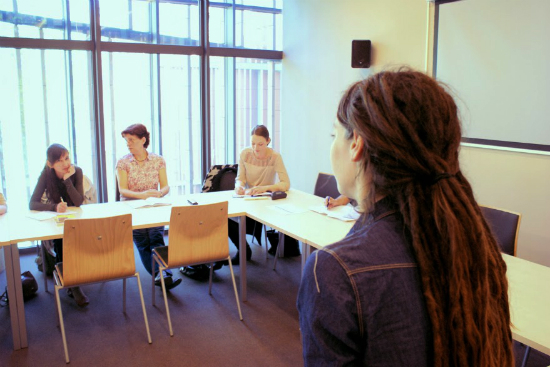 Cristina Villena during her EVS project in Rajska Library

I had never volunteered in my home country, but I had always wanted to live abroad for a while, so I started searching for a project.

I had no idea where to start, but my sending organisation, AIPC Pandora, pointed me to an online resource where you can find all the groups and projects participating in EVS (European Youth Portal). They also gave me some good tips about preparing my motivation letter in English, in which I had to explain why I wanted to be a volunteer.

When everything was ready, I started applying for dozens of projects. I sent more than 30 emails to different countries – I didn’t mind where I would be going. Two months after my first request, I had received some polite responses thanking me for my time, but refusing my petition.

Urszula Marcinkowska, EVS project coordinator at the STRIM association in Krakow, explained to me later that finding the right placement can be a long process: “A lot depends on luck. It’s important to start searching for a project well before the deadline. I would suggest two or three months earlier.”

The deadline is the moment when hosting organisations apply to their national EVS agencies for funds. The agency verifies the descriptions of projects and decides which ones to fund. There are three deadlines each year – the next is September 30.

Urszula’s advice would have been useful to me in those first months. I was about to give up, when an offer arrived. It was from a project in Krakow with the Youth Development and Integration Association STRIM. 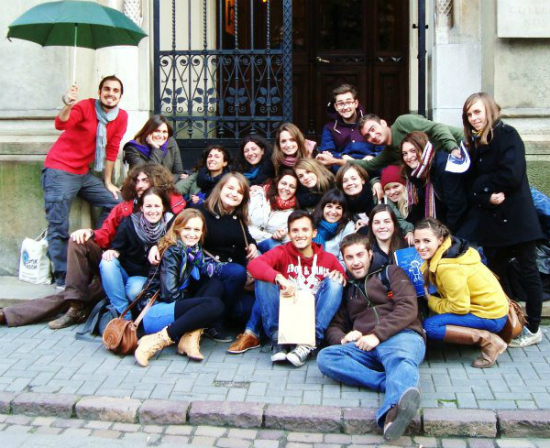 My project started in October 2012 and finished in June 2013. A current volunteer at STRIM, Arthur Smet from Belgium, summarized what it is about very well: “I mainly work in the office, promoting volunteerism, creating content for the website, writing a blog. I also help organise events like International Volunteers’ Day.”

The project was perfect for me, because it was related to youth and media, but I also discovered that there are projects in more than 15 fields, such as culture, sport, cultural heritage, arts, animal welfare, environment and development cooperation. For example, there are another 22 EVS volunteers working with STRIM, the majority of them volunteering in kindergartens and schools.

For Marion Moll, a 19-year-old German EVS volunteer who worked at Krakow’s Kindergarten No. 38, it was her first experience abroad after high school: “ It was very interesting. I feel it changed me, but I don’t know how to explain it. I am glad I came to Krakow. There were around 40 volunteers in the city, so we always had other people in the same place doing the same thing.” 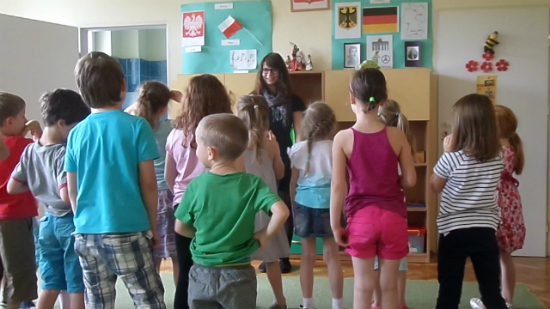 Marion Moll in her class at Krakow’s Kindergarten No. 38

Lucille Guiheneuf is a French EVS volunteer at Kindergarten No. 176 who came to Poland after doing Erasmus in Spain: “I teach the kids songs, words and dances in Spanish, French and English to show them something about other countries. EVS is great because you don’t need to be professional or have special qualifications.”

Cristina Villena, a Spanish volunteer at the Rajska Library, agreed with Lucille: “EVS can give you the opportunity to do a real job that, in other circumstances, you could not even apply for. I knew I would not have the opportunity to teach in Spanish in a public institution for big groups of people, like I did in Poland. It was a hugely important professional experience.”

EVS is a valuable learning experience both for the volunteers are the kids they work with. All the volunteers I spoke to felt they had learned more than in all their years at university: “You became able to live in a country where you don’t speak the language. You also learn about yourself and other cultures, because you meet a lot of people from all over Europe,” said Lucille.

Urszula Marcinkowska at STRIM backed up the view that it is a good experience for all involved: “If you give children the possibility to actually see a volunteer from another country who looks and sounds different, has other traditions and doesn’t speak Polish, they begin to understand multiculturalism.”

EVS can alter your perception of life – it certainly had that effect on me. I finished my EVS project one year ago, and I can’t help smiling whenever I think back to those months that turned my world upside down.

I returned to Krakow in November 2013, as many others have done, to work and continue living the adventure,. Lucille summed up my feelings very well: “EVS is such a great experience that is hard to return back to real life.” Even if you are in Krakow.

7 thoughts on “Volunteering In Krakow Changed My Life”