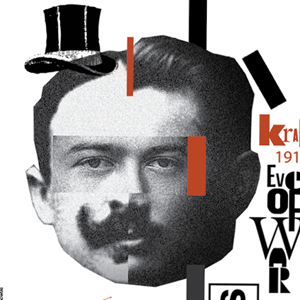 When the great novelist Joseph Conrad returned to his childhood home, Krakow, after an absence of 40 years, he arrived on the day World War I began. It was the evening of July 28, 1914 and Krakow, then a part of the Austro-Hungarian Empire, had been at war since 11 am that morning, when Austria-Hungary declared war on Serbia. Conrad went for a midnight stroll with his oldest son:

“The Square, immense in its solitude, was full to the brim of moonlight… I noticed with infinite satisfaction that the unnecessary trees the Municipality insisted upon sticking between the stones had been steadily refusing to grow. They were not a bit bigger than the poor victims I could remember. Also, the paving operations seemed to be exactly at the same point at which I left them forty years before.”

But Krakow had changed. When Conrad left, in 1874, Krakow had been an underdeveloped, medium-sized town on the fringe of the Austro-Hungarian Empire – decrepit, ridden by decades of occupation and misfortune, demoralized by several failed nationalist uprisings, obsessed with celebrating its glorious past. Four decades later, modernity had arrived with full force. 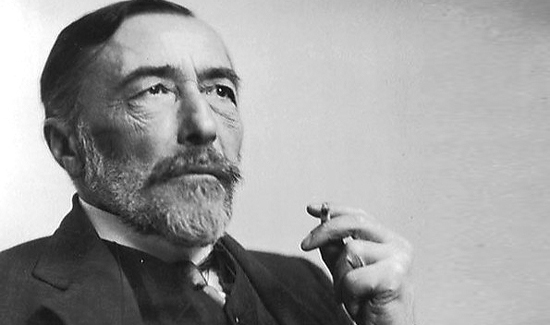 Had Conrad wandered further than the Rynek on that first night, he would have seen a range of major urban improvements. The old branch of the Vistula that had separated Kazimierz from Stare Miasto – a filthy, marshy cesspit full of germs – had been drained and turned into the majestic boulevard that is today’s ul. Dietla.

Wawel, after decades of dilapidation, was about to be restored to its former glory with the help of wealthy private donors. New, spectacular buildings, such as the Słowacki Theatre and Collegium Novum, added to the city’s beauty. Running water and electricity increased hygiene and safety.

The city’s population had tripled to around 150,000, partly thanks to the integration of outlying villages such as Dębniki, Zakrzówek and Bronowice as part of Mayor Juliusz Leo’s Greater Krakow scheme, but also due to longer life expectancy and lower infant mortality rates.

Instead of horse carriages, people were now moving through the city in trams. The first electrified tram lines had opened in 1901, and the change to today’s standard gauge network began in 1913. Cars had already begun their colonisation of the city’s narrow streets and, just four years before Conrad’s arrival, a large crowd had witnessed an even more miraculous event: the first aeroplane taking off from Błonia. 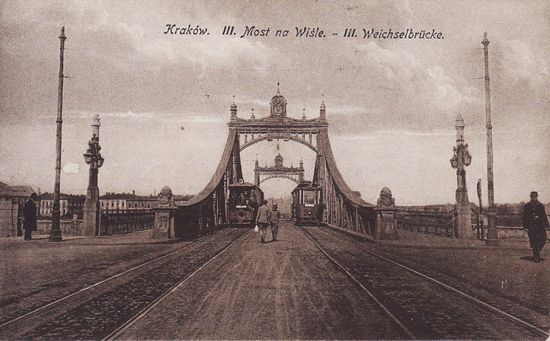 The Krakus Bridge in 1915 – It was destroyed during World War II and replaced by the current Silesian Insurgents Bridge (Most Powstańców Śląskich) in 1971.


The way Cracovians spent their free time had also changed drastically. Certainly they still took Sunday walks on the Planty, Błonia or the banks of the Vistula, and certainly they still went to the theatre, though modern dramas, revolutionized by Wyspiański and the Young Poland movement, did not have much in common with the sedate bourgeois plays that Conrad might have seen as a schoolboy. But at the same time, there was a whole new range of leisure activities that the young Conrad could not have dreamed of.

One recent phenomenon was public sports facilities, in the form of Jordan Park. Opened in 1889, it was the first of its kind in Europe, providing a place for all social classes to get fit and enjoy recreational sports for free. Organized club football, another 20th-century novelty, had also recently become popular, with thousands of spectators gathering on Saturdays and Sundays in the newly erected stadiums to watch local teams Cracovia, Wisła, and the Jewish teams Jutrzenka and Makkabi.

The first permanent cinemas had been established less than ten years previously, and new ones were opening regularly. In 1913 alone, no less than five of the new teatry kinematograficzne opened up in the city. Long cues of cinema lovers could be found outside the major movie theatres, such as the Orion on Sw. Tomasza, the Excelsior on Rajska and the Kineton on the Rynek. 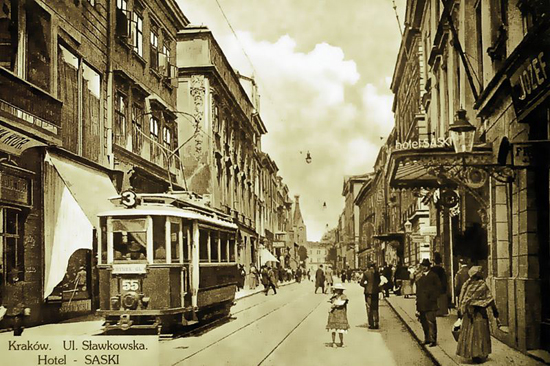 It was an energetic, exuberant age – an age in which everything seemed possible. Almost every year saw the introduction of new technologies that would drastically change people’s lives. The news from abroad was even more spectacular: intrepid explorers conquered the most remote places on Earth, submarines could go deeper than anybody had ever gone before, aeronauts broke distance and speed records on a regular basis.

Cracovians read about the transformation of their own city and developments in other parts of the globe in flourishing local newspapers. Tabloids such as the Ilustrowany Kuryer Codzienny and Nowiny dla Wszystkich reported local events, gruesome murders and spectacular accidents involving modern means of transport. They also introduced their readers to European trends in fashion, music, and the arts.

One agitated columnist in 1912 informed Cracovians that, in Paris, the new custom of young men appearing in public without a hat was starting to gain ground, lamenting that: “Seeing as Parisian trends always end up here anyway, it’s most likely that we’ll see bareheaded men strolling about with snow in their hair or on a bald dome.”

Krakow, in other words, was no longer a sleepy backwater and fast becoming a modern European city.

And yet, in other respects, Krakow’s situation remained entirely unchanged – it was still under Austrian rule, still a possession of the octogenarian Emperor Franz Joseph I, who, in 1914, had been on the throne for 66 years. Austrian military forces were omnipresent: they had cleared out of Wawel in 1905, and turned the castle over to civilian use, but at the same time extended the system of fortifications that surrounded the city, and continued to occupy several large barracks. One of the Empire’s elite formations, Infantry Regiment No. 1 ‘Kaiser,’ was stationed in Crown Prince Rudolf Barracks on ul. Warszawska – the buildings that are home to the Krakow University of Technology today. 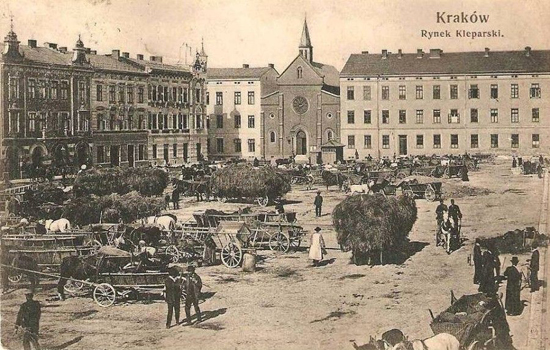 The Habsburg Empire was a fragile entity: a multi-ethnic state, held together by the authority of the Kaiser but also by a considerable degree of autonomy granted to its regions. Nationalist sentiment constantly threatened to tear the Empire apart, and nowhere more so than in the Polish territories – known collectively as Galicia.

Poland had been divided and occupied by Prussia, Russia, and Austria, the so-called Holy Alliance, in the late 18th century. More than a century later, the tragedy of the partitions still loomed large in the collective consciousness of Poles. There had been frequent attempts to restore the Polish national state, many in the form of uprisings. With the advent of war, and the once-allied occupying forces now on different sides, Poles saw new opportunities in their struggle for freedom.

At the forefront of those who saw the war as an opportunity for Poland was a man who would later become the Second Republic’s first head of state, and an iconic figure in Polish historiography, to the extent that Cracovians would build a huge mound in his honour: Józef Piłsudski. After years of underground fighting in Congress Poland, he had relocated to Galicia in the early 1900s, where he founded paramilitary units disguised as sporting or shooting clubs – their purpose was to train a Polish army in all but name. 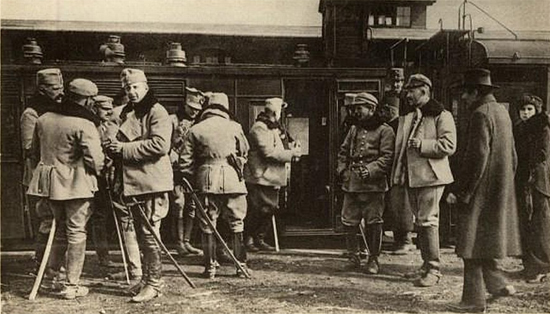 Troops of the Polish Legion embarking for the front in 1914

On August 6, 1914, Piłsudski gathered 144 men of what was to become the Strzelec (Rifleman) unit on Błonia and addressed them in a speech that quickly entered national myth: “Soldiers! You have been granted the immense honour of being the first to go to the Kingdom and breach the borders of the Russian partition as the advance column of the Polish Army… I survey you as the corps from which the future Polish Army will evolve, and I salute you as the first staff company.”

Joseph Conrad had left the city four days earlier for Zakopane, taking the last civilian train permitted to leave Krakow. He probably read the news about the Russian Army’s advance into Galician territory. In December 1914, Wieliczka was captured and Krakow was under siege. Winter forced the Russians to retreat and Krakow did not come under direct threat again, though it did suffer severe food shortages.

Poland, however, suffered gravely. About two million Poles fought in the armies of Germany, Austro-Hungary and Russia – largely depending on which part of Poland they happened to be born in. Half a million were killed, and another million wounded. Over one million Poles, civilians and soldiers, are thought to have died in the war.

Conrad could not have imagined on that July night in Krakow that he was witnessing the start of an upheaval that would free Poland for the first time in 123 years. The war destroyed all three of the empires that had occupied Poland, and Conrad lived to see the establishment of the Second Polish Republic in November 1918.

11 thoughts on “Krakow on the Day World War I Began”