It is never pleasant to hear about child abuse in the news. Especially when the person perpetrating the crime is one you hold in high respect, a person you entrust your children to, a person who has taken a vow of celibacy. I am, of course, talking about priests. Why have I brought up such a touchy subject? Well, a number of reasons. First a priest was arrested in Krakow for the alleged molestation of a nine-year-old girl on a trip to the mountains. This was swiftly followed by an apology from the Polish Catholic Church to all victims of abuse committed by priests; quite something seeing as they have spent many years attempting to hide paedophiles within their ranks. Next came the information that 19 priests were convicted of child abuse between 2010 and 2013. The next day, it turned out that only one of these 19 was sent to prison.

Let me make something plain: I am not insinuating that all priests are paedophiles (an accusation bandied about by many when you bring up this topic). Far from it. Nor am I suggesting it is a problem solely connected with the church. In any occupation involving close contact with children – teaching, medicine, social work (to name a few) – you will find paedophiles. If you have a tendency to find minors sexually attractive, then these roles will also seem attractive. Why then do the media concentrate on religious men?

Because when priests commit these crimes it is not just the crime that is the problem: there is also the hypocrisy. These men take a vow of celibacy. This is seen by many as meaning that priests are of a higher level of being than us mere laymen; in fact, many priests do put themselves on the same pedestal as God himself. These men profess sexual purity, demand others to confess their ‘sins’ and judge others if their lifestyles do not conform to the Catholic ideal. 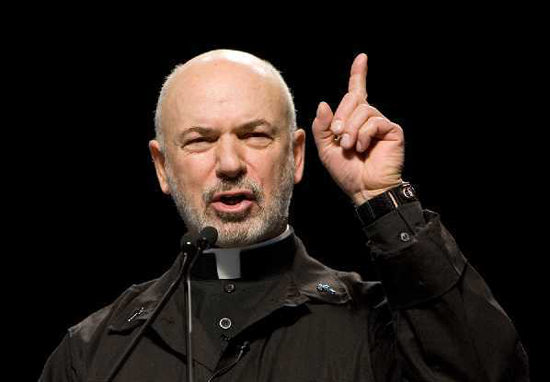 And the Lord said: “Let every man have his own wife, and let every woman
have her own husband”… wait, what?

This hypocrisy is not restricted to paedophilia. When I lived in Koszalin, a small city in the north of Poland, every January priests would visit the homes of parishioners asking for donations, pleading poverty. Well, I say asked: more like they were told they would burn in Hell for all eternity if they did not pay up. And yet not a week went by when I did not see a priest driving round in a sports car. A fine use of the Church’s money. Here’s an idea: if you want money, sell up and buy a Nissan Cherry.

When I first moved to Poland and got into conversations about child abuse, I was told: “This is not a problem we have in the Polish Catholic Church.” Evidently it is. It is admirable that the Church has finally apologised, but it should also ask itself this: why does it keep happening? For the answer they should look to themselves. Sexuality is inherent in all of us; when you repress it, it tends to surface in other ways. Other churches allow their clergy to marry. Take, for example, Judaism. They do not distinguish between clergy and laymen, and rabbis are expected to live normal lives, including an obligation to marry: if not, how could they counsel their followers on matters such as marriage, sex and children? Also, they work under a ‘hired and fired’ policy: you break the rules, you are out. Something the Church may want to think about.

Again, I will stress that I am talking about a very small minority of people within the Church. That does not mean we should turn a blind eye. This small minority are not men of God. They are men drunk on power, safe in the knowledge that, if caught, they will be protected, unlike others who commit these crimes. It is wrong that priests are seen as being on a higher moral level than the rest of us. They are human and therefore fallible, and should be treated as such.