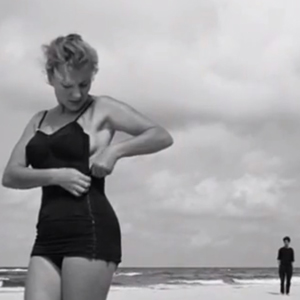 Although a prolific novelist, Tadeusz Konwicki also built a solid cinematic reputation on a short filmography devoid of any literary pretext.

His debut, Ostatni dzień lata, was an act of defiance, and not only from an aesthetic point of view. Konwicki explained: “At the time, shooting a movie at the seaside was like filming in a presidential residence. The beaches were heavily guarded night and day.”

Ostatni dzień lata is a visually poetic two-hander that recounts a flirtation between two unnamed characters among the sand dunes of the Polish Baltic coast. Cinematographer Jan Laskowski also made a virtue out of necessity when he captured some crane shots using an old ladder that had washed up on the shore.

Konwicki’s first directorial effort took Polish cinema momentarily away from the horror of war by filming uninhabited open spaces. Anyone who admires the frugal storytelling of Roman Polański Knife in the Water will be amazed by Konwicki’s opening masterstroke of a shot, created with even more limited resources.