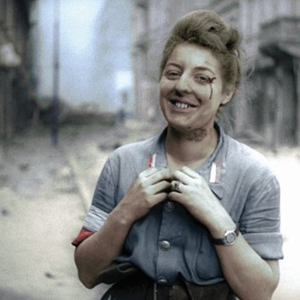 This is a big year for Polish directing sensation Jan Komasa, who has mobilised on multiple fronts. Komasa became so absorbed with the idea of bringing the story of the 1944 Warsaw Uprising to the big screen that he created both a feature film and a non-fiction drama.

In anticipation of the release of Miasto 44 (City 44), a relatively high-budget movie about a love triangle during the days of the revolt, he also completed Warsaw Uprising, a feature film created entirely from original newsreel shot by partisan fighters.

Komasa created a story line about two brothers hired by the AK (Home Army) to film the uprising. We hear them as off-screen voices while watching re-edited and stunningly colourised footage of the people who were actually there in 1944.

As with the award-winning documentary, 5 Broken Cameras, the viewer is placed in the position of potentially witnessing the death of the, in this case fictional, filmmaker, but there is no question that many of the real people looking directly into the camera did not survive the 63-day battle.

A lot of the footage is of the preparation for the rising. Seeing the smiles of the insurgents as they build barricades and weapons and joke around lays bare uncharted emotional paths that could never be explored in a feature film. Polish cinema has finally produced its own Germany, Year Zero.