Spangly, sparkly outfits. Crazy dance routines. Bad music. Beards. Lots of beards. Yes, May 10 was Eurovision Day, and did it not spark a lot of controversy? Poland’s buxom girlies lost out to Austria’s bearded lady in what right-wingers have called ‘the collapse of modern Europe’, a show of ‘decadence’ that was ‘ideologically offensive.’ Really? Okay, decadent, but has the Eurovision not always been that? Is social Armageddon upon us because some bloke wears a dress? I do not think so.

I had not seen Eurovision for years, but this time it was a friend’s birthday and he wanted to go to the pub and watch it. So off we went, and I was pleasantly surprised. Far from hours of terrible, cheesy acts (Jedward, anyone?), most of the songs were passable. Some were even fantastic (Pollapönk were my personal favourite. Icelandic punk rock for children? Get in!). From the excited cheers, it seemed people were confident of Poland’s chances. Alas, it was not to be.

Why? Of course it’s all subjective, but compared to many of the other songs, Poland’s entry was pretty weak. Especially against Conchita Wurst who, ignoring what she looks like, has a damn good voice and sang a damn good song. Okay, she used a gimmick to help her stand out: cross-dressing with a beard. According to many people I have spoken to, this was a heinous trick. How dare she win because of a gimmick! But did Donatan and Cleo not use a gimmick? A gimmick which, to be fair, has been done to death in recent years. And what a fine example to set to young girls. Want somebody to notice you but have no or little talent? Just put your tits on display. 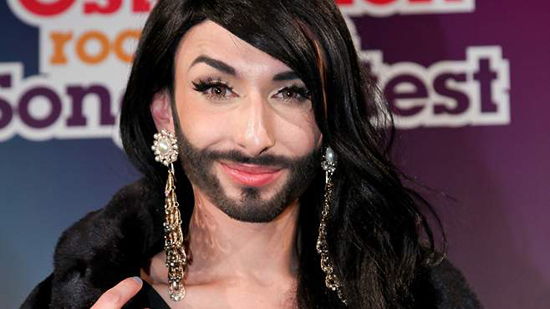 “Gimmick? I don’t know what you could possibly mean.”

Looking ahead, June 14 is the date of the Equality Parade in Warsaw. An event which aims to promote tolerance and diversity, and which has incensed Sebastian Moryń, editor of portal Fronda.pl. ‘Homosexual Attack on Warsaw!’ read his headline. In his view, the parade should be prohibited because the majority of the participants will be scantily-dressed, behaving obscenely and will cause a public scandal. Apparently, he doesn’t want his children seeing this. Dear Mr Moryń, if you do not want your children to see the parade, do not take them to see the parade.

I suppose my point is this: there is still a lot of prejudice around concerning the LGBT community. This is often supported by arguments such as ‘It is against God’s will’ or ‘It is not Christian’. Yes, Poland is a Christian country, and Catholic doctrine is against same-sex couplings, but Spain is also a predominantly Catholic country, and (apparently) the most LGBT-friendly. I know a lot of Polish Catholics who have no issue with gay people. So does it really have anything to do with religion? I think not.

Moryń describes the parade as ‘frightening.’ Clergyman getting away with molesting children for years: that’s frightening. A police officer selling information to football hooligans: that’s frightening. A bearded lady winning a tacky song contest and some gay people peacefully marching in the name of tolerance? Frightening? A sign of social collapse? Come on, a little perspective, please.