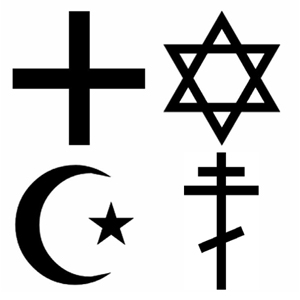 When asked what it means to be Polish, most people will agree that being Catholic is a defining characteristic. It seems that Poland has replaced France as the first daughter of the Church in the modern eye. But this seemingly universally accepted fact isn’t as straightforward as it appears.

The recent canonization of Pope John Paul II seemed to confirm the strong identification of Polish nationalism with the Catholic Church. Papal flags flew alongside Polish flags, as the canonization was closely followed by the three-day secular celebrations of May 1–3: May Day, Flag Day and Constitution Day. John Paul II continues to be celebrated for his participation in the undermining of the Communist regime as much as for simply being Polish, which tends to mask the fact that the Catholic Polish identity is a recent construct.

The Polish nation was officially recognized in 966 with the baptism of Mieszko I. It is a small imaginative step from there to conclude that, from that time on, Poland has been a Catholic country. In fact, Poland was never very seriously Catholic until the modern era.

According to Tomasz Kalisz, a leading Protestant scholar in Poland, this is the first time in the history of Poland that its population and its religion have been almost homogeneous. Any serious student of Polish history will find that, from the beginning, religious affiliation often depended on where in Poland one was standing.

Prior to the 18th-century Partitions of Poland, the religious landscape was complex and scattered. The Polish-Lithuanian Commonwealth counted large numbers of Uniates (Greek Catholics of the Slavonic Rite), Russian Orthodox, Protestants, Jews, and Muslims among its population. There were even pagans, with traditions such as harvest festivals, known in Polish as dożynki, that continue to this day.

The 15th and 16th centuries in Poland were times of great religious and cultural diversity and tolerance. There were laws to ensure religious freedom, in stark contrast with Poland’s neighbours and much of the rest of Europe. Of the many reasons for this tolerance, one of the most significant was the fact that the nobility (szlachta) determined the laws of the country and were themselves a diverse group comprising 20 percent of the population.

Poland’s kings were elected by the nobility and many of those were not Polish – Henry Valois, Poland’s first elected king, and Stanislaus I were French, Wadysław Vasa and Sigismund III were Swedish and Augustus II and III were both Saxons. Also, Stanisław I and Augustus III both came from Protestant families. While the wars of the Reformation raged in the rest of Europe, Poland remained relatively conflict free. There were incidents that marred the peace but, as it is with human memory, the many years of tolerance and religious harmony are forgotten while the few gross tragedies are remembered.

The 17th and 18th centuries saw the rise of intolerance in Poland, but often as a problem within individual faiths. A divide existed among the Orthodox churches (in the mid-1300’s they represented 40 percent of the population). There were constant quarrels over doctrine, with the Russian Orthodox accusing the Greek Orthodox Confession of the Slavonic Rite of being traitors.

The Protestants experienced similar struggles, especially with the rise of Calvinism among the nobility. The Calvinists were plagued by divisions on questions of doctrine and discipline and, at the same time, were a major force behind the 1573 Confederation of Warsaw, which ensured freedom from religious persecution. Jews and Catholics at times fought with individual sects within the confines of their own faiths. Externally, great tragedies did occur between faiths and at times resulted in the loss of life but overall, and compared to what was happening outside the borders of Poland, the country remained more a haven to persecuted religions than a den of discontent.

Poland was so well known as a place of religious freedom that many different religious groups sought protection within its borders over the centuries. Jews fled here from persecution elsewhere on the continent, as did the Czech Brethren, Muslims, Armenians, Protestants from England, and Catholics from Scotland.

The partitions of Poland had the effect of imposing three different official religious identities on the Polish people. Orthodoxy prevailed in the Russian east, the Prussia west was Protestant, and to the south the Habsburg Empire had a decidedly Catholic identity. Strangely, however, this did not spread to the population. Most retained their religious identities regardless of border changes.

It was the 20th century that brought a great shift in the religious identity of the Poles. Several factors transformed the Polish lands from a multicultural, multi-religious conglomeration into a near-homogenous nation. Tensions between religions existed prior to World War II, but it was the overwhelming tragedies that occurred on Polish soil during the war years that savagely diminished diversity.

The huge shift in Poland’s borders following the end of World War II also brought a shift in demographics. In the west, large chunks of Germany were added to Poland’s territory. In the east, Poland lost close to 50 percent of its pre-1939 territories to the Soviet Union. Millions of Poles were uprooted from the east and relocated to the west or elsewhere in central Poland.

The post-war Communist regime, imposed on a largely unwilling population, officially accepted cultural diversity, but in reality a very different story unfolded. The Catholic Church suffered greatly from actions that made affiliation with the Church illegal and closed religious schools and orphanages. The Polish Orthodox Church was placed under the control of the Russian Orthodox. These bullying impositions seem to have spurred Poles to rally round the Catholic Church as a point of common defiance. These reasons, war, resettlement, and Communism, as well as other political and social factors, resulted in a country that became almost universally bound to a Catholic identity.

According to Zbigniew Pasek, professor of religious studies at Krakow’s AGH University, the scene has shifted again in the last 25 years. As the Soviet grip fell away and the fresh waters of commerce flowed in from the West, Poland’s identity has begun to change. Krakow today has a flourishing religious life and is now home to many churches, such as United Pentecostals, Baptists, Methodists, 7th Day Adventist’s, the Polish National Church, Islam, the Krishna Awareness Society as well as Buddhists. There is also a resurgence of the Jewish faith centred on the Jewish Community Centre active in Kazimierz.

Walking through the streets of Krakow, one can find an Orthodox Church on ul. Szpitalna, a Lutheran Church on ul. Grodzka, a 7th Day Adventist’s church on ul. Lubelska, an Islamic Centre on ul. Sobieskiego, and active Jewish worship in Kazimierz’s historic synagogues. On the Planty it is not unusual to find a friendly pair of Mormon missionaries, who will be happy to speak to you in Polish or English, or Pentecostal Evangelicals handing out fliers and equally eager to talk about their beliefs. Many English speakers are also familiar with the Jehovah’s Witness group that invites English speakers to their regular meetings.

Interfaith life here in Krakow is also blossoming. There are many open lectures on interfaith beliefs and relations as well as cooperation between churches. Each January, local Christian churches meet for a week of prayer for Christian Unity. During May, the Lutheran Church on ul. Grodzka street will hold a Bible marathon in which Protestant and Catholics alike will participate, as well as anyone else who might be interested. They have also held a Christian women’s interdenominational group that has met for the past three years for a World Day of Prayer.

Krakow is teaming with missionaries from all over the world and the flavour of the religious scene continues to change. One of the challenges to all churches is what is being called the secularization of youth. More and more people are falling away from particular denominations and following their own spiritual path or none at all. This is seen in almost all churches, but most evident in the drop in active participation of Catholics in their local parishes. However, this may simply reflect the well-known symbol of the two headed Polish Eagle – with one head looking back to the days when Poles lived among each other peacefully in tolerance and the other to a future Poland that re-embraces ethnic and religious differences.