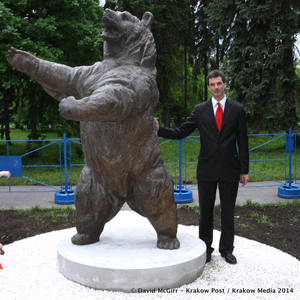 A statue of Wojtek the Soldier Bear was unveiled in Krakow’s Jordan Park on Sunday at the climax of a five-year campaign to commemorate this unusual Polish hero and the World War II army of General Władysław Anders.

A Syrian brown bear adopted as a mascot by Polish troops in Iran, Wojtek accompanied Anders’ forces throughout the Middle East theatre and during the invasion of Italy. Loved by his human comrades in arms, he carried ammunition and enjoyed bottles of beer and occasional cigarettes, which he ate.

The unveiling took place on the 70th anniversary of the conclusion of the Battle of Monte Cassino, at which Polish soldiers fought with distinction and where Wojtek’s unit, the 22nd Artillery Supply Company, saw action.

In a speech delivered in English and Polish, local businessman and one of the project’s instigators, Richard Lucas, said that the Wojtek story was an excellent way of introducing people to the an important part of Poland’s history. 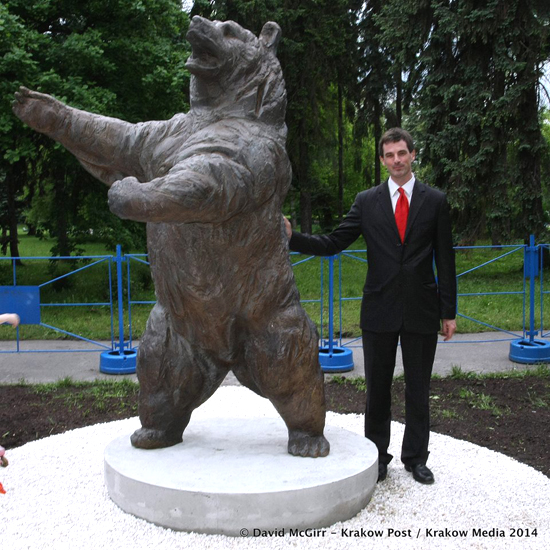 “Children love bears. Through the attractive symbol of Wojtek, children and everyone can learn about Polish history, not just here but around the world,” said Lucas.

Lucas also made the point that the statue project had been funded entirely by private donations, large and small, and that many people had devoted their time to ensuring its success.

The project raised about 50,000 zł for the design, construction and installation of the statue, which is cast in bronze and stands 2.3 metres tall, at numerous fund-raising events and thanks to substantial donations from Lucas himself and local businessman, Andrzej Targosz.

The Wojtek statue joins the busts of dozens of illustrious Polish figures, both military and cultural, also commemorated in Jordan Park, including General Anders. 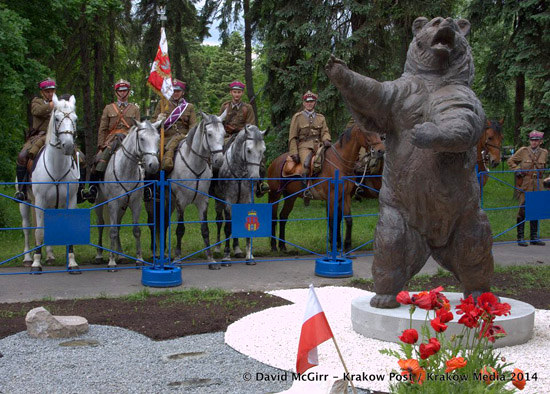 8 thoughts on “Wojtek the Soldier Bear Monument Unveiled In Krakow”