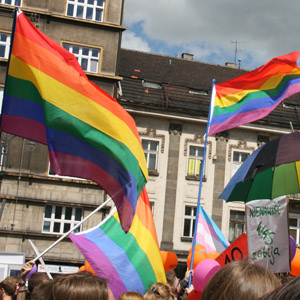 Participants in the 4th Marsz Rowności (equality march) in Krakow paraded from Plac Wolnica to Plac Szczepański on Saturday, May 10.

Violence between marchers and right-wing protestors during previous marches meant that this year’s event was accompanied by a strong police presence and shadowed by a police helicopter. 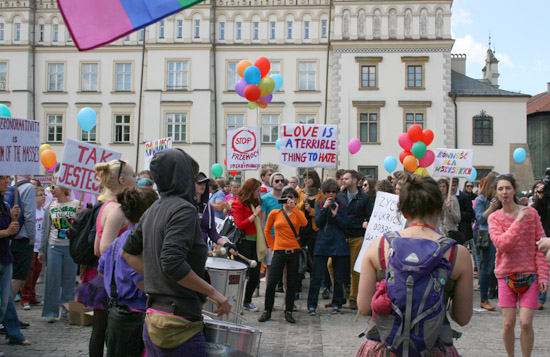 Marchers chanted the slogan “Rowność z nieba nie spadnie” (equality will not fall from the sky), then danced to the rhythm of tin drums and listened to a reading of the festival’s manifesto on Plac Wolnica.

The march was preceded by a demonstration organised by the NOP (Narodowe Odrodzenie Polski – National Rebirth of Poland), a nationalist political party opposed to the promotion of homosexuality.

NOP protesters met equality marchers on the Main Square bearing placards that read “A boy and a girl, that’s a normal family”, while participants of the march replied with “Homophobia must be cured.” No serious violence was reported.

The march is part of the wider Queerowy Maj festival, which includes conferences, exhibitions, parties and debates. At a discussion panel held on the afternoon after the march, organisers and participants debated ways to make future event more visible.

Debaters also raised the issue that some people who wanted to take part in the march did not do so because they feared violence.

2 thoughts on “Equality March in Krakow Without Serious Violence”