Krakow is missing a trick – many cities have laid out cultural ‘trails’ that visitors can follow to see the best points. There is much potential for these in our own urban landscape.

The footbridge over the Wisła River from ul. Mostawa to ul. Nadwiślańka has opened a new route from Kazimierz to Podgórze. Lots of pedestrians now walk from ul. Bożego Ciała via the dead Pl. Wolnica, with the attractive Ethnographic museum, to Mostawa over the bridge toward a nice small square at the beginning of ul. Piwnica and then straight ahead to the also dead Pl. Podgórze. No wonder the place is dead – there is an ambulance station there that emits deafening sirens of over 90 decibels in the middle of a residential district.

The bridge was built with EU-money. There are many new pubs and restaurants along the route it has opened up, not to mention the restaurant-boats almost under the bridge. The bridge has facilitated economic development and improved the urban environment for pedestrians, but the opportunities of both Pl. Wolnica and Pl. Podgórze remain underexploited. 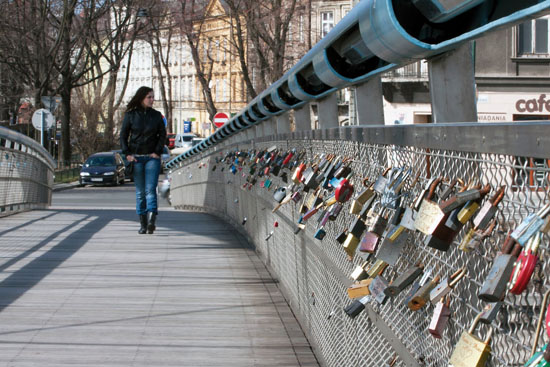 The new Cricoteka museum (housing the works of Tadeusz Kantor) will soon open along the Nadwiślańka route. Opposite, a large and fancy apartment building is under construction – a typical yuppie residence that will surely have an influence on the area. Nadwiślańka ends at Pl. Bahaterów Getto. The new route is an interesting alternative to the one coming directly from ul. Szeroka in Kazimierz over the bridge to Pl. Bahaterów Getto and the former ghetto. Once you are here, you can go further into fascinating Zabłocie.

A former industrial district, Zabłocie is gradually being transformed into a new residential area with premises for the arts, artists, and entertainment. It already has two, hugely popular museums: MOCAK (Krakow’s museum of contemporary art) and the Schindler Factory. In an old industrial complex nearby is an entertainment centre called Fabryka, with ateliers for artists.

There are many possible cultural trails in Krakow. Like in most cultural cities in Europe, one can walk from one district to another. From the Old Town towards Kazimierz and from there to Podgórze and Zabłocie. Or from Wawel Hill along the Wisła towards Galeria Kazimierz. On the other side of the river is the Japanese exhibition hall, Mangha, and the city beach in front of the former Forum hotel.

There are currently many hindrances along these possible trails that could be addressed if the city authorities were aware of this aspect of a tourism-driven city – walking from one district to another, spreading cultural traffic all over the city, enhancing profits at the same time.

Krakow pretends to be a cultural city, but it is not represented at the World Cities Culture Forum Summit in Amsterdam, where: “Major cities from around the world will… participate in the third World Cities Culture Forum conference, with the aim of strengthening links and developing strategies to support and maximize the potential of culture at the heart of city life.”

Krakow is bidding for the Olympic Winter games. We know from Sochi what an awful lot of money it costs to organize such an event. What a foolish thing bidding for the Winter games is, while the city has not yet optimized its assets in the fields of infrastructure, institutions, or education, to mention just a few.