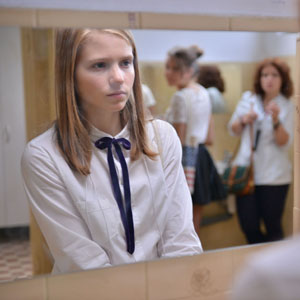 It would be reasonable to expect any Polish feature film about youth released in the next few years to be compared to Jan Komasa’s hit, Sala Samobojców, even if only for advertising purposes. In this respect, the Polish-Danish co-production Obietnica (The Word), directed by Anna Kazejak, is no exception.

Janek (Mateusz Więcławek) is given 24 hours to complete a special task to please his girlfriend Lila (Eliza Rycembel). “I wanted to make a movie about aggression in females,” explained Kazejak, who drew inspiration from a real life crime in Sweden. As an evil seductress, Lila can indeed be compared to the self-destructive Dominik in Sala Samobojców. Neither character can contain their anger, but Lila’s calculated rage is directed entirely outward. The traditional, music-driven walk-down-the-hallway shot featured in all college movies is abruptly interrupted by Lila when she storms out in a fit of rage.

The screenplay cleverly demonstrates how the persuasiveness of teenagers can go far in their own sphere, which runs parallel to and hidden from the adult world. Filmed in a clear-headed style and post-produced in Denmark, Obietnica evokes the disturbing simplicity of Gus Van Sant’s Elephant (2003). Screened in the Generation section of the Berlin Film Festival, Kazejak’s effort also gives some rare exposure to the cinematically neglected beauties of Szczecin.