Perhaps I shouldn’t write about cycling in spring, lest spring never come. In January and February, I wrote detailed advice about cycling in winter and the temperature immediately rose, snow instantly thawed and winter disappeared. Since I changed my studded tyres a few weeks ago, and it did not automatically bring a return of snow and ice, perhaps it’s safe to carry on.

Springtime is all about cycling. Even non-cyclists are tempted to have a go. Krakow’s public bicycle scheme seems to be on the verge of collapse, with the municipality having made a u-turn on its policy of tendering for private companies to run it (which may have taken several months). The only choice now is to buy a bike, if you don’t already have one.

Spring is, of course, the most expensive time to spend money on a bicycle – the choice is huge, but so are the prices. My advice is to try a second-hand shop (‘Komis’ in Polish), and choose a German or Dutch made city bike instead of a flashy, brand new mountain bike. For most purposes, a ladies’ frame is more comfortable, making it easy to mount and dismount no matter how heavily laden your bike is. Don’t go for derailleurs – an internal gear hub works better.

Remember to have your bike equipped with lights. Polish law allows for battery powered flashing lights (white or yellow front, red rear) that may not be used in daytime. However, my advice is to go for hub dynamo powered lights. They never fail, provided you use LED lights, not filament or halogen bulbs, you never loose them and the lights are really bright. You can order a new dynamo-equipped wheel separately in most bike shops. And don’t forget about a strong lock, preferably a u-shaped heavy shackle.

The good news is that 2014 will bring a huge cycling breakthrough in Krakow, another good reason to get on two wheels. New cycle tracks on ul. Mogilska, Aleja Jana Pawła II and Aleja Pokoju will mean that most parts of Nowa Huta will become accessible by bike from downtown. Many fear that the ul. Mogilska track will be too narrow, but it will be continuous. The existing stretches on Jana Pawła II will be significantly improved. And it will connect all the existing cycle facilities in Nowa Huta.

In Podgórze, a tramway and cycle bridge is under construction across the rail tracks by Płaszów Railway Station and is due to be completed this year (or early 2015). It will be accompanied by some other, minor, improvements but the south of Krakow will not be as comfortably connected as Nowa Huta.

Where to go on your new bike? You probably know the Trasa Tyniecka, a cycle track along the Wisła River to Tyniec Abbey, but if spring comes early, you may want try something more ambitious, namely Ojców National Park north of Krakow. It’s doable on a city bike, with most parts of the route flat and paved. However, you can expect quite a lot of traffic on ul. Glogera and Route 794 to Zielonki and Skała. An alternative route along ul. Pękowicka is hilly, so most cyclists prefer the Prądnik River valley. 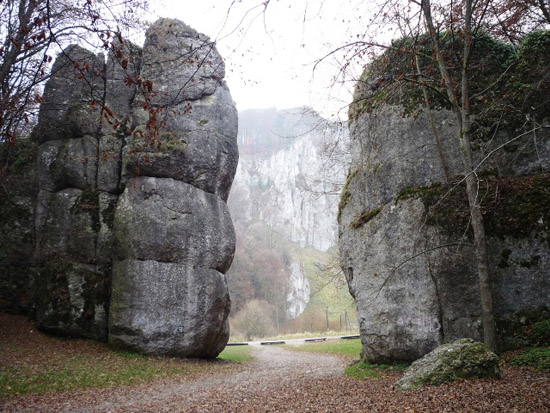 It’s a bit risky in terms of weather, but assuming winter is not coming back: in Januszowice village, turn left to Korzkiew, and the beautiful part of the spring bike trip begins. The road is paved, shaded with trees and carries little car traffic. Watch for signs to Prądnik Korzkiewski. Turn left onto a small bridge and then, after a steep stretch uphill under picturesque trees, turn right. You will be following a narrow road up the Prądnik River valley, straight into Ojców National Park. It’s surprisingly close to Krakow – the Brama Krakowska rocks are only 20 km from the Market Square. If you don’t have a map, there are plenty of other cyclists to follow.

Ojców is a nice place on its own (although a bit crowded, with a long stretch of road filled with illegally parked cars on weekends), but you may want to cycle another 10 km to Pieskowa Skała castle. There are a number of restaurants and other places to stop along the way.

Alas, one thing does not change: Pieskowa Skała castle has a very strict anti-bike policy – you can’t walk your bike inside, to the courtyard. You have to leave it outside, in a hidden, poorly designed and rusty bike rack. I don’t think anything has changed in this regard, and I urge you to complain about it to whoever you can. Since March is not the warmest month of the year, it may be sensible to have a picnic indoors, in the castle, and not next to this feeble excuse for a bike rack.

One thought on “On Two Wheels: Spring Cycling”