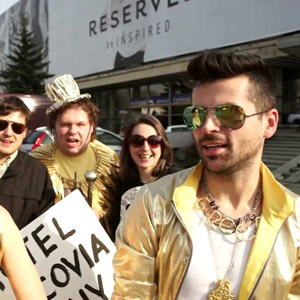 This Saturday, March 22, demonstrators will march in Krakow protesting plans to demolish the Cracovia Hotel and replace it with a shopping centre.

The Cracovia Hotel, situated on the southern end of the Błonia meadow, opposite the main building of the National Museum in Krakow, has lain empty since 2011.

Designed by architect Witold Cęckiewicz, the Cracovia Hotel was one of the largest and most modern in Poland when it opened in 1965. The current owner, Echo Investment, has already built 18 shopping centre in Poland and intends to open a new one on the site.

The demonstration’s organisers, ‘Hotel Cracovia Pany,’ have adopted the slogan ‘Chciwość Miasta,’ (Greedy city) and accuse the developer of placing profit above considerations for the sensitive nature of the site.

Hotel Cracovia Pany are asking participants in the march to wear gold-coloured clothing and have prepared gold masks and a ‘golden calf’ to symbolise greed.

In January, a 37m² mosaic created by Helena and Roman Husarski was rediscovered in the hotel, hidden behind plasterboard.

An exhibition entitled ‘Chciwość Miasta’ will be held in the Małopolska Garden of Arts from Friday, March 21, featuring the work of Helena and Roman Husarski, Cecylia Malik, Bartolomeo Koczenasz, Michał Lichtański, and the Group Blue.

3 thoughts on “March Against New Shopping Centre in Krakow”