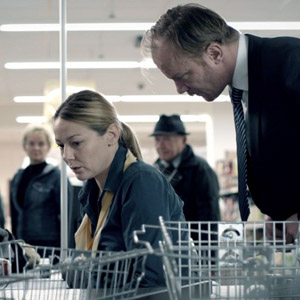 Looking forward to seeing the Hollywood movie industry produce its first comedy set in a no frills supermarket, Maria Sadowska has tailored the first example of the genre in Poland.

The spectacular work-to-rule action organised nationwide by supermarket staff during the hot autumn of 2010 drew public attention to the working conditions of retail store personnel. “We have not had a film with this discussion before, with a strong woman character and the world of the working class. These two elements make this film different,” explained Sadowska, who graduated from the Lódź Film School after a successful career as a pop singer.

Dzień kobiet (Women’s Day) is built on the double metamorphosis of Halina (Katarzyna Kwiatkowska), a single mother who is unexpectedly appointed store manager of a Motylek (butterfly) supermarket, a fictional company with strong echoes of real-life Biedronka – the largest discount chain in Poland.

Immersed in the empty rhetoric of corporate training, where she is taught to sacrifice everything in the name of productivity, Halina begins to lord over her former peers who are obliged to accept a back-breaking work schedule under humiliating conditions. After being terminated by her boss (Eryk Lubos), she transforms into lady vengeance out for justice for herself and her oppressed colleagues. Sadowska’s feature triumphed at the 22nd Festival of East European Film in Cottbus.